For potato growers in Western Canada who are nervously watching the progress of potato psyllids (Bactericera cockerelli) moving in from the northwest United States, there’s good news: none of the potato psyllids found in Western Canada are carrying the zebra chip pathogen, Candidatus Liberibacter solanacearum (Lso). The Lso pathogen is transmitted by the potato psyllid, and zebra chip has caused severe damage in potatoes in the western United States, Mexico, Central America and New Zealand. 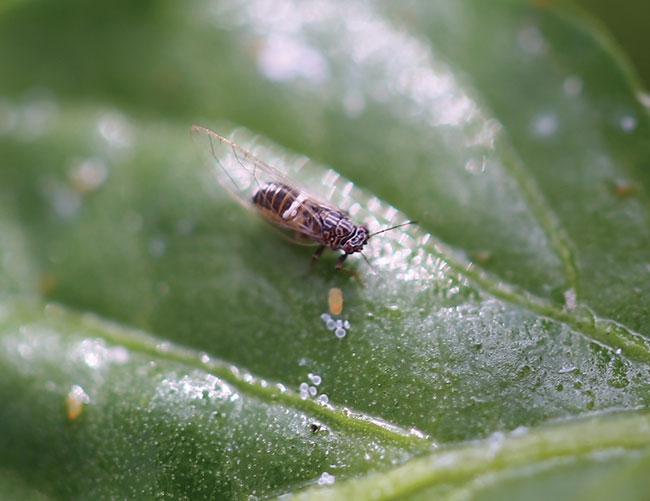 Potato psyllid is distinguished by a broad white strip on the adult’s abdomen. For potato growers in Western Canada who are nervously watching the progress of potato psyllids

“The bottom line is that over 200 [potato psyllid] were found in Alberta in 2016, plus some in Manitoba and Saskatchewan. The main result of interest is that all the DNA testing done by collaborating researcher Larry Kawchuk at [Agriculture and Agri-Food Canada] Lethbridge shows no Lso bacterium,” says Dan Johnson, an entomologist at the University of Lethbridge.

The insect was not found in other Canadian provinces.

Johnson has led the potato psyllid monitoring program in Canada since May 2013. The program is funded by Growing Forward 2 through Agriculture and Agri-Food Canada (AAFC), and Agri-Science Clusters and managed by the Canadian Horticultural Council, with the participation of regional grower groups like the Potato Growers of Alberta. Larry Kawchuk at the AAFC Lethbridge Research Centre carries out DNA testing. Scott Meers, an entomologist with Alberta Agriculture and Forestry, is co-ordinating insect monitoring in Alberta.

The monitoring and research network also includes people from potato grower associations in other provinces, the Canadian Potato Council, the Canadian Horticultural Council, agronomists, federal and provincial specialists, university researchers, potato processors and others in the potato value chain.

In addition to yellow sticky card monitoring of potato psyllids across Canada, more than 1,000 suspect plant tissue samples of potato, tomato, and Solanaceous (nightshade) weeds from across Canada were collected between 2013 and 2016. The samples were visually examined for Lso symptoms and polymerase chain reaction (PCR) tested for the presence of the pathogen. These also tested negative for Lso.

Potato psyllids have been collected rarely in Montana, Alberta and Manitoba since the 1930s, however, they are appearing more frequently as warmer weather allows populations to expand into Canada.

Potato psyllids feeding on potato plants (by sucking on the plant’s juices) is the only known vector for transmitting the Lso pathogen from plant to plant. The pathogen infects the phloem tissue in potatoes. Foliar symptoms include stunting, chlorosis, vascular tissue browning and curled leaf edges that turn yellow or brown. Tuber symptoms include vascular tissue browning resulting in a striped appearance that reduces processing value.

“Although potato psyllids have been known in the past to cause some damage themselves, the real concern is mainly from the bacterium, and we don’t have it in Canada yet. But if our potato psyllid population continues to increase – as it has done during 2013 to 2016 – and if it becomes more continuous with U.S. populations, and if tomato and potato plants (and tubers) are shipped more frequently, then it could arrive,” Johnson says.

The economic impact can be large. Annual losses in Texas have been in the $25 to $30 million U.S. range, while estimates in Idaho predict a 55 per cent reduction in returns if the Lso pathogen becomes established.

Potato psyllids can survive freezing temperatures, and Johnson says the potato psyllids collected during 2015 and 2016 did not appear to have undergone long-distance flights, indicating they may have survived from previously established, low-density populations and are not recent arrivals from the U.S.

The potato psyllids were collected from a broad area across southern Alberta, and some areas farther north.

Sampling and DNA analysis is trying to identify their haplotypes (genetic characteristics). Sampling and monitoring of diseased plant samples and potato psyllids will continue in 2017.

A parallel project is looking at potential natural enemies of potato psyllids.

“The very low level of insecticide use, often none at all, in potato fields in Alberta allows natural enemies of potato psyllid to exist,” Johnson says. “When conditions exist, like in this case, a better scenario [than insecticides] is to have healthy populations of insects that are natural enemies of potato psyllids and other small insects. In this situation, we may have natural controls in place that we can encourage.”

Potato growers who are interested in participating in the monitoring program should contact their regional potato growers’ association.