Clubroot is a serious disease affecting both crop yield and quality of canola in several counties in central Alberta, and isolated cases have been identified in Saskatchewan, Manitoba and North Dakota. The disease, caused by the pathogen Plasmodiophora brassicae, is particularly a problem because of its long-lived spores and its ability to rapidly multiply. Soil fumigation may be one tool to manage localized infestations in specific fields or regions where the disease is not yet prevalent.

According to Sheau-Fang Hwang, a research scientist with Alberta Agriculture and Rural Development (AARD) in Edmonton, soil fumigation with Vapam has been used successfully in vegetable crop production for control of clubroot and other soil-borne diseases. “A few years ago I dismissed the idea as unrealistic and too expensive for large-scale field crops like canola,” she says. “However, after some requests from growers looking for options, we initiated a project in 2012. Research shows that clubroot is often focused more on field entrances, although sometimes a hotspot can show up in the middle of a field. Growers wanted to know if soil fumigation could help control clubroot in these smaller localized areas in the field.”

The research project included both greenhouse and field studies to assess the effect of Vapam applied at varying rates for reducing clubroot severity and improving crop growth. The greenhouse trials, conducted on soil from clubroot-infested fields, showed a 12- to 16-fold reduction in primary and secondary infection and clubroot severity at all of the Vapam application rates (0.4-1.6 mL L soil) assessed. As well, application of Vapam at soil moisture levels in the range of 10 to 30 per cent had a large effect on both disease severity and infection rates, and plant growth parameters.

Field experiments were conducted in 2012 and 2013 at two clubroot-infested test sites in Edmonton. A clubroot-susceptible canola cultivar was grown in soil treated with Vapam, with plants subsequently assessed for disease severity, plant weight and height, and gall weight. The treatments consisted of Vapam at 0, 40, 80 and 160 mL/m2, which corresponded to the 0, 0.4, 0.8 and 1.6 mL/L soil treatments (0, 0.17, 0.34, 0.67 mL active ingredient/L soil) used in the greenhouse study. The Vapam solution was applied to the plots and immediately incorporated into the soil with a rototiller to a depth of 10 cm and then rolled with a land roller. At seven days after treatment, the trials were seeded with a plot seed drill.

“The results from the two-year study showed that soil fumigation with Vapam was effective in reducing primary and secondary infection and clubroot severity, and improving seed yield of canola under field conditions,” Hwang says. “This study demonstrated that Vapam can improve seedling establishment, plant biomass, plant height, pod number and yield in canola, while reducing gall mass (measured as root fresh weight) and clubroot severity. One application should last for a few years, although we don’t know exactly how long. Although the field may not be totally clubroot free, the whole population density of clubroot will be reduced and the impacts on yields should be significantly reduced.”

Under field conditions, the range of soil moisture added with the Vapam application was equivalent to 0.5-3.0 mm rainfall onto dry soil and probably contributed less than two per cent moisture content to the cultivated layer of soil. Researchers compared plots covered with plastic and those without, but did not find much difference, and the time and labour for using plastic was very intensive. From the study, a 10 to15 per cent soil moisture level was optimum to maximize the effectiveness of Vapam in controlling clubroot severity on canola and, therefore, field applications of Vapam would probably benefit from rainfall prior to treatment. Additional studies are required to assess the effect of temperature, application timing, and soil moisture and soil type on the efficacy of Vapam against P. brassicae under field conditions.

“The cost of a soil fumigant application of Vapam is quite expensive and growers will have to determine whether or not is it economical for their operation,” Hwang explains. “In fields with localized areas of infection, such as field entrances and smaller hotspots in the field, an application may be warranted. Growers should use the label recommended application rates. If the field has a lower density of clubroot spores, then the lower rate may work. However, if the field has a high density, then the higher recommended rate will provide improved control.”

The application of soil fumigants must be done either in the fall after harvest or as a pre-plant application in early spring. The product must be incorporated into the soil to the depth of the canola roots or at least 10 cm. With a pre-plant application, seeding should be delayed at least a week or until the effects of the fumigant disappear to make sure the crop seedlings aren’t impacted by the application. Trying to time the application just prior to a rain is also beneficial to ensure adequate soil moisture for product efficacy. Applicators of soil fumigants must carefully follow label directions and buffer zone requirements, and wear recommended protective application gear.

“We are continuing to do more research on the use of soil fumigants for the control of clubroot, including a look at residue effects,” Hwang notes. “We are also looking into the potential for other formulations that may have a fit for larger scale field applications. Our study results suggest that Vapam can effectively reduce clubroot severity and may be useful for the treatment of transplant propagation beds in brassica vegetable production, and for the containment of small, localized clubroot infestations in commercial canola crops.” 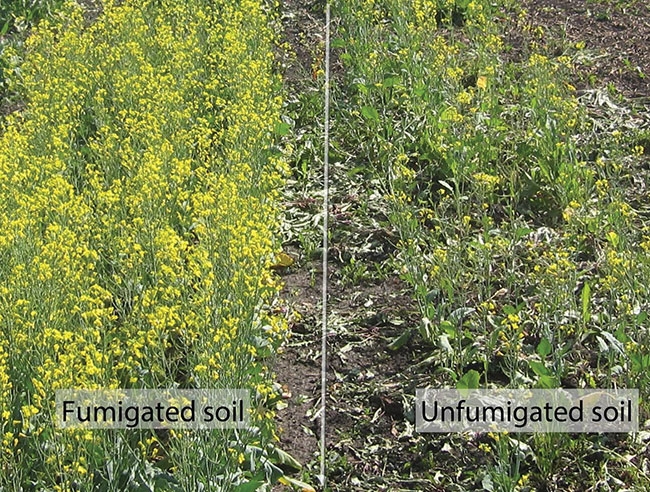 Effects of Vapam (left) on canola grown under field conditions. Clubroot is a serious disease affecting both crop yield and quality of canola.