In Western Canada, clubroot in canola is a serious problem. In Alberta alone, infestations have been identified in more than 2000 fields across several municipalities. Although clubroot represents a potentially serious threat to canola production in Saskatchewan, so far only a few isolated infestations have been identified. Industry approached researchers to see if there might be an option for controlling clubroot in these small areas and limiting the spread of this soilborne disease to other fields. 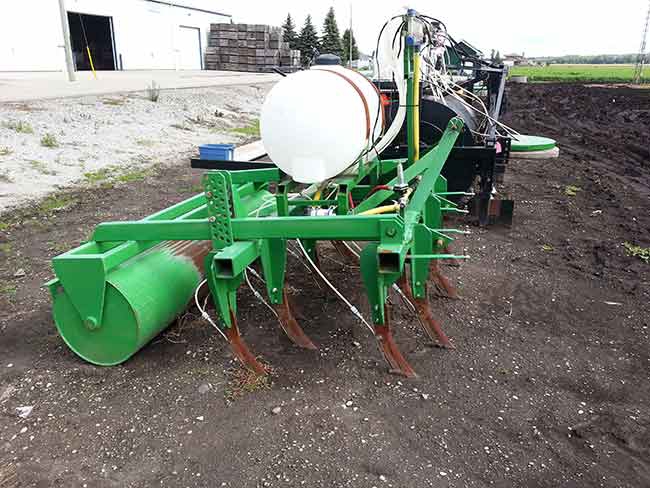 The fumigant applicator used in the clubroot field trials at the University of Guelph in 2016. In Western Canada

Researchers took up the challenge from growers and initiated a three-year project in 2013 to help determine if it might be possible to contain or even eliminate small areas of infestation if they were identified early enough. “When growers first approached us, pathologists weren’t sure this strategy would work, but growers convinced us to think small and see if it was possible to control these small patches before they caused bigger problems across whole fields,” explains Bruce Gossen, a research scientist with Agriculture and Agri-Food Canada in Saskatoon. “The intent was only to look at the feasibility of eradicating clubroot from small-scale infestations, we know it would never be feasible to do on larger areas or entire fields.”

In collaboration with the Muck Crops Research Station at the University of Guelph and Alberta Agriculture and Forestry, researchers conducted studies under both controlled conditions and field trials over three years to determine if fumigant treatments on the small areas could eradicate clubroot. The treatments included injecting fumigants into the soil in the plots and then tarping them with plastic covers for a two-week period.

“Under controlled conditions where there was really good contact between the fumigant and pathogen, every fumigant we tested was highly effective against resting spores,” Gossen says. “We moved the trials to the field, but the efficacy in field trials was consistently low, even when the fumigants were applied using professional-grade application equipment. We compared construction-grade plastic as a cover to a specialized totally impermeable film (TIF) cover, which did produce much higher efficacy, but at a higher cost. Applying the correct cover such as TIF improved the efficacy of the treatment more than maintaining the cover for the two-week period. The results with the construction-grade plastic were very poor and similar to control trial measures. The study demonstrates that resting spore populations can only be reduced, not totally eliminated, by the application of fumigants. No treatment totally eradicated the pathogen on any soil or in any year.”

Gossen adds that since the project was initiated, federal legislation governing the use of fumigants has changed, requiring professional application and tarping of every application. “This not only adds to the cost, but in Saskatchewan and Alberta there are currently no professional fumigant applicators. We can continue to use fumigants in our research trials, but without access to professional fumigators, it is not practical for growers. However, in areas where fumigation is more available, this strategy could be a real option for controlling clubroot in small areas, and for large-scale industry activities such as oil and gas, pipelines and road construction.”

Researchers also wanted to determine how deep in the soil the resting spores went and what the distribution was in the soil profile at infested sites. The study showed the pathogen distribution was highly variable horizontally and vertically, with samples only 0.5 metres apart often containing very different levels of spores. However what was surprising is that spores were even found at a one-metre depth, suggesting the spores may move similar to bacteria in the soil through ground water channels. Studies are underway to try to determine the viability of the resting spores at the different depths.

“For growers, the resting spores deep in the soil profile are really not a problem as any resulting infection will occur late and have little impact on crop development,” Gossen explains. “However, it does mean there is a reservoir for future infection sitting deep in the soil. On the other hand, for companies involved in large-scale soil movement, such as oil and gas companies and some construction activities, this could have a big impact. As the results of our viability studies become available, we can confirm the viability of resting spores at the deeper levels, but for now finding resting spores at a metre deep is a concern and these industries have been informed through the Saskatchewan Clubroot Initiative.”

Field trials continued in 2016 at the University of Guelph, and the hot dry conditions raised more questions about the possibility of solarization as an option. Plots were covered with TIF and left in the sun for two weeks. “Although this may not work in most years, under the very hot, dry conditions in Ontario this year compared to previous years, we couldn’t find any infected plants in the materials we seeded after the treatment, even in the untreated control,” says Gossen. “The results were unexpected, but also raises the question if solarization might be an option in areas of Saskatchewan where conditions tend to be hotter and drier than Ontario in some years. However, the challenge is this only works in the middle of summer, and would take that area of crop out of production for the whole year. It is also more expensive, but would also clean up weeds and other problems. We will continue to explore this concept.”

Proposed plan for managing small areas of clubroot infestation
Based on the results of the project, researchers have proposed a plan that may be reasonable for trying to manage small areas of clubroot infestation and are working with the Canola Council of Canada on the concept. They will start testing the concept in 2017 by implementing the procedure to treat areas where new pathotypes are showing up. At least 11 new pathotypes of the clubroot pathogen have been confirmed, and more may be identified.

“The concept is when an infected patch is first identified, a treatment area is marked at least twice as large to make sure the complete area is managed, even if symptoms aren’t showing up yet,” Gossen explains. “The area needs to be marked properly to ensure all field activities or equipment moving in the field are kept away from the area and are prevented from moving any infected soil around. A lime application is also made, because we know that raising the pH makes the environment less suitable for the pathogen to develop infection. The area needs to sit idle or be seeded to grass for three to four years, followed by a field assay to determine if the infection has been eradicated and the area can be put back into the field. Growers should then be able to implement a four-year rotation using a clubroot-resistant canola variety and be able to go back into production.”

As part of the project, researchers have developed new technologies to provide better estimates of spore numbers in the soil and to be able to track them more effectively. Good progress has been made towards improving estimating tools and researchers continue to refine the technology. Initial results show that resting spore populations do drop substantially in the first two years, and using a four-year rotation could have a big impact on populations. Infections are often first identified near field entrances, so a small grass patch may be acceptable for growers in these types of field areas and provide an opportunity to try to stop the infection from spreading.

“Saskatchewan has the opportunity to be ahead of the curve and with new clubroot-resistant varieties now available, industry can continue to move in a positive direction despite all of the new pathotypes identified,” Gossen says. “Saskatchewan is in a good position for dealing with clubroot because we have resistant cultivars, growers can recognize clubroot when it appears and we have tests to confirm the disease. As well, clubroot doesn’t like dry conditions, high pH or high calcium soils, and Saskatchewan tends to have all three, so disease progress should be slower. So even though Saskatchewan is closer to the source of infection, levels of soil pathogens detected are higher in Manitoba already than in Saskatchewan, which is likely due to their wetter soils with lower pH and calcium. Clubroot is expected to continue to show up in pockets, and if those small areas can be managed, there may be a way to keep the pathogen from becoming a big issue in Saskatchewan.”

Growers need to be regularly monitoring for the disease no matter where they are growing canola and be reminded clubroot can show up anywhere. The current small patches of clubroot identified in Saskatchewan are not in places where they were expected, so no region is completely safe. Implementing recommended four-year crop rotations, using clubroot-resistant varieties in areas where infection has been identified and trying to provide spot treatment to small infected areas can hopefully keep the pathogen from becoming a big issue in Saskatchewan. Researchers are continuing their work to improve tools and technology for tracking and controlling the disease both in small areas and across larger fields.