Protecting nitrogen (N) fertilizer until plants are ready to use it is important for reducing potential N losses and maximizing yields. For crops such as corn or sunflowers that take up much of their nitrogen after the first few weeks of growth, using a controlled release product like ESN at seeding can replace a second top dress application and improve seed safety.

“We have completed a lot of research on corn in the U.S. and have shown that growers can make one application of ESN at seeding that provides for slow release of N and eliminates the need to go in and top dress later in the growing season,” explains Ray Dowbenko, agronomist with Agrium. “Although we have done little formal research on smaller acreage crops like sunflower, we know that sunflower is similar to corn in terms of timing of N uptake, but not total N requirements. Therefore, we may be able to use corn as a proxy for crops like sunflower to consider timing of N requirements and the best strategy for application. Sunflower is also very sensitive to fertilizer, which may make the use of a controlled release or polymer coated product a strategy for improving seed safety.”

As is the case with any crop production input, growers need to determine the need and fit of a controlled release product for their operation. ESN may not have a fit for every grower, but it can provide benefits such as yield stability particularly where N losses are a risk.

“We started research on ESN in 1999, so we have almost decades of work in Canada and the U.S. in a series of different crops,” says Dowbenko. “The product is still providing the same positive results as it always did, yield stability, protection of N losses that result in yield increases, increase in seed safety and protein levels. For growers that have a reason to use ESN and see some type of value for the situation they plan to use it in, then ESN will do exactly what it is supposed to do: improve agronomics and environmental safety.”

Assessing the need for ESN
Growers should start by thinking about the land they farm, the type of soils and situation they have, and identify places where there is a high potential of value of using ESN. Dowbenko has developed a table as a guide for any crop, with corn as an example to help in making decisions (see Table 1, above). Growers need to assess the level of soil organic matter in their field, drainage class and the level of early season and growing season precipitation, and then match the right fertilizer product to their system.

“If soils have low organic matter and are coarse textured and there is a potential of high rainfall, then under these conditions there is a high N loss potential and protecting N has a high benefit,” explains Dowbenko. “However, under similar conditions but where soil organic matter is high, then there is still a high potential for loss, but because of the high soil organic matter there is also a high potential for N mineralization. So although the product protects against N loss, the soil may mineralize enough N to make up for the losses and you might not see a yield difference. Therefore, it is very important that growers understand the reason they want to use a product such as ESN; otherwise, they might find it didn’t work as they expected, either because they didn’t need the product in the first place or they used it for other reasons such as one application instead of split, or seed safety, and not just an increase in yield.”

The other factor is that different forms of fertilizer are released and perform differently in the soil. With ESN, about 8 to 15 per cent N is released in the first 10 days, about 40 to 60 per cent in the first month and about 85 to 90 per cent is released within 60 days. On the other hand, urea mostly dissolves within hours of application and ammonium formation can be complete in two to four days (environment dependent). After that, ammonium converts to nitrate over a couple of weeks (environment dependent); ammonium nitrogen is stable in the soil, but the nitrate form can be susceptible to loss. Understanding crop needs and timing of N uptake are important when making N fertilizer application decisions (see Fig. 1, below).

ESN also provides for seed safety because the coating acts as a physical barrier between the seed and fertilizer. This can be a big benefit for crops like sunflowers and other crops where seed safety is a concern.

“Growers may choose to use a blend of ESN with their conventional fertilizer or all ESN, depending on the level of seed safety they need,” says Dowbenko. “To determine seed safety, growers can use their provincial fertilizer guidelines for N requirements for their crops and then depending on the percentage of ESN in their fertilizer blend, can improve seed safety by as much as three times. In a blend with ESN, seed safety is increased by 1.5 to 2 times, while using 100 per cent ESN, seed safety is increased by three times. This may have a good fit, for example, for growers who have single shoot openers and don’t want to change to mid- or side-row banding equipment. They can often put down their full N requirements in the seed row in one pass by using ESN. For cereal growers, ESN provides for protein benefits and some growers are using ESN as part of a fertilizer blend in their wheat program.”

The recommended rate for ESN is at the same rate as a conventional N fertilizer program. Potato and corn growers, for example, use 100 per cent ESN and sunflower growers should be able to use a similar program. In some situations, ESN can be applied as a split application and for some crops such as sunflower, fall application is also an option. Growers need to look at their production economics on their operation and also fine-tune the percentage and rate with their local conditions and experience.

Under the right circumstances, there can be yield increases with ESN. “In Canada, we typically see a higher yield benefit on canola than cereals, with increases in canola yield of eight to 10 per cent on average, and wheat and barley six per cent on average. Cereals are determinant and set one head and fill, while canola is indeterminant and can keep flowering and setting on pods. So having N available later in the growing season is a benefit to the late pods that are still filling. We have also done some research to determine if late N causes problems with maturity or with green seed in canola, but no negative effects were shown in any studies.”

Dowbenko works all over the world, with programs in China, Europe and South America, and the results of how the product performs in all of these locations are the same as in the U.S. and the northern Great Plains.

“We have lots of research with consistent results over many years to show that ESN works and does what it is supposed to do under the right conditions,” says Dowbenko. “Although we don’t have all of the answers for all of the crops such as sunflowers, the guidelines we have developed for crops such as corn may be able to provide the information growers need to make decisions on their land and with their crops. Benefits such as protecting N applications, increasing efficiency, seed safety and environmental protection may be reasons enough, beyond just a yield benefit.” 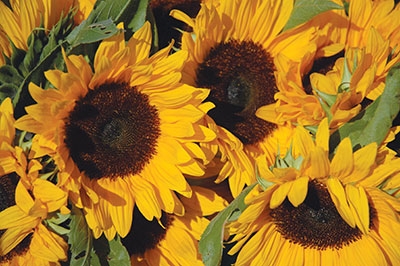 With similar nitrogen uptake to corn Protecting nitrogen (N) fertilizer until plants are ready to use it is important for reducing potential N losses and maximizing yields.