Taking a simple, inexpensive, strip-based test for mycotoxins from the lab to the grain elevator or farm. 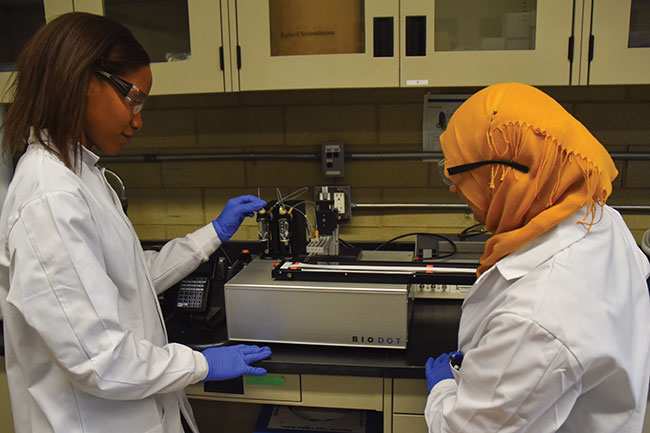 Fiona Ebanks and Shahad Abdulmawjood setting up the BioDot printer for producing the mycotoxin test kits in the Laboratory for Aptamer Discovery and Development of Emerging Research (LADDER) at Carleton University. All photos courtesy of Evan Monk and Derek Hodgson, Carleton University.

Researchers at Carleton University in Ottawa have made significant advances in their biosensors designed to detect mycotoxins in grains. In cereal grains, fungal diseases like Fusarium can cause infections such as Fusarium head blight in wheat, barley and corn, reducing grain yield and quality. These fungal diseases can also produce mycotoxins that can be dangerous and sometimes fatal to livestock and humans, and tend to be difficult and expensive to detect.

“One of the goals in my lab is to develop inexpensive aptamer biosensors for agriculture for detecting low levels of grain mycotoxins in a complex environment,” explains Maria DeRosa, professor and head of the Laboratory for Aptamer Discovery and Development of Emerging Research (LADDER) at Carleton University.

“Aptamers are short sequences of DNA that can recognize and bind tightly to very specific molecular targets like toxins, viruses, bacteria or drugs. We took our discovery of specific aptamers that bind to mycotoxins in food and crop matrixes and are turning it into a low-cost, easy-to-use technology and quick test at a grain elevator or farm, with minimal training or resources.”

In an earlier project, DeRosa successfully developed a test kit for Ochratoxin A, a mycotoxin of concern in stored grain, using a small lateral flow assay test developed in her lab. This simple, inexpensive test is similar to a tiny pregnancy test; it has small paper strips in a plastic casing, with the results appearing as a coloured line or dot in another window.

“We put the initial prototype to the test by comparing the results of our test to sample results from a more expensive, advanced analytical technique for detecting Ochratoxin A. We were sent a small package of blind samples – some contaminated with Ochratoxin A and others were not. Our results were very encouraging, as we were able to successfully detect contaminated samples down to 0.5 parts per billion (ppb) in a real sample using our very simple assays. We are now scaling these test kits in the lab and will be piloting and optimizing them in the field.” 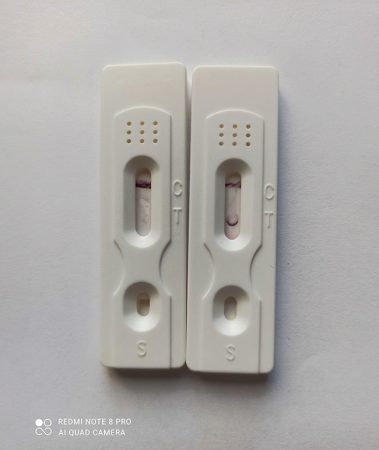 Testing strip biosensor for quick, simple test for mycotoxins such as Ochratoxin A in grains, developed by Maria DeRosa in the LADDER.

The next step for DeRosa is a new three-year project to take this successful technology and know-how and apply it to other challenging mycotoxins. “We have identified specific aptamers for other important mycotoxins in grains and are developing test kits for them,” she says. “Deoxynivalenol (DON) is an important crop mycotoxin that can be a problem throughout Canada in any given year for wheat, barley and corn growers. Aflatoxin B1-AFB1, although not yet a problem in Canadian grains, is definitely a problem elsewhere in the world and with climate change could be something to be concerned about. Aflatoxins are definitely a concern with some imported grains and other products.

“Another mycotoxin, Fumonisin B1-FB1 is sometimes an issue for corn growers. Our objective in this project is to get these additional mycotoxin tests to the same stage as the Ochratoxin A test for pilot testing in the field in different environments across the country.” This three-year project is funded by Western Grains Research Foundation, Saskatchewan Wheat Development Commission, Alberta Wheat Commission and Manitoba Crop Alliance.

One objective is to make things even easier by including all of the mycotoxins on one multiplex strip. Similar to a pool testing kit that includes several chemicals in one test, the mycotoxin test strip would be able to test several mycotoxins at once. A multiplex strip test can provide growers with peace of mind, whether they are selling to the grain elevator or another buyer, or importing grain into their operation.

DeRosa adds that another goal is to develop the test to be more quantitative, rather than just a visual test. With smartphone technology, there are ways to develop an app that could, for example, allow a user to take a photo of the strip that would provide more information about the results. This additional knowledge could help with decision-making, using a simple user-friendly test kit and a smartphone at the grain elevator or on the farm.

The test kits are currently being manufactured and assembled in the lab. “Once we can show all of the toxin tests work really well and reduce any risks to a very low level, then the manufacturing could be commercialized and scaled outside of the lab,” DeRosa says.

Shahad Abdulmawjood preparing the lateral flow assay for mycotoxin testing in Laboratory for Aptamer Discovery and Development of Emerging Research, or LADDER, at Carleton University.

Maria DeRosa (centre) and students Shahad Abdulmawjood (left) and Fiona Ebanks (right) working in the LADDER at Carleton University. The goal, DeRosa says, is to develop the test to be more quantitative, rather than just visual.

Fiona Ebanks preparing the mycotoxin test kits with the BioDot printer and lateral flow assay in the LADDER. The test kits are being manufactured and assembled in the lab before large-scale commercialization will take place.

“We are also trying to reduce the manufacturing costs as much as possible, which roughly pencil out to less than $1 each to make. The most expensive part of the kit is the aptamers, which use gold nanoparticles for the colour sensor. We are exploring whether we could use less volume of colour or perhaps other nanoparticles, such as those from copper, that might make it even less expensive.

“We ultimately want to make sure the technology is not just in my lab, but easily accessible and available at a low cost to all Canadian farmers and industry.”

This novel bionanotechnology is getting attention for other potential applications in agriculture. In June 2021, DeRosa was one of 24 scientists worldwide – and the only Canadian – to receive a Bayer 2021 Grants4Ag award for using aptamers to make agriculture more sustainable. The program received over 600 applications from almost 40 countries. This one-year grant supports researchers to see if their promising innovations could provide future solutions for agriculture. Along with funding, Bayer provides mentors and access to industry networks for advancing these innovations.

“In this project, we are trying to develop a totally different aptamer that could be useful for smart delivery of nutrients or herbicides,” DeRosa explains. “For example, being able to selectively deliver nutrients to just the crop and not weeds, or deliver herbicides to target only the weed and not other plants.

“We do have evidence that this type of delivery can work in health, such as an aptamer that delivers drugs directly to cancer cells but not healthy cells, reducing side effects for patients. We also have aptamers for making drug delivery possible through the very challenging human blood-brain barrier, sort of a Trojan horse where the aptamer binds on a receptor and tricks the brain into letting it through. Agriculture often mirrors health, and these smart delivery systems could also work for crops. We are excited about the possibilities and the new innovations that will benefit agriculture – not just for mycotoxin detection, but for other applications in the future.”