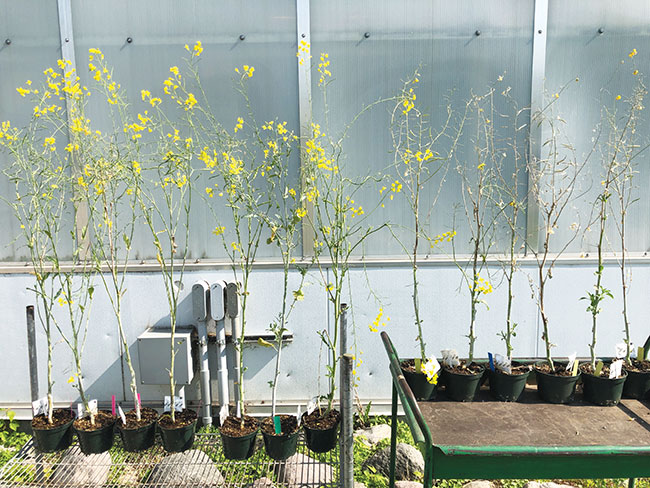 Canola plant engineered for tolerance to sclerotinia on left, compared to an untransformed canola plant on the right. photo courtesy of Daniel Sullivan, supplied by Nicholas Wytinck.

Sclerotinia stem rot, also called white mould, is the number one yield robber of canola in Canada. The disease, caused by the fungus Sclerotinia sclerotiorum, is tough to control, in part because it overwinters as sclerotia in the soil, where it can stay viable for a decade or more.

In the spring, sclerotia germinate and release spores that settle on flower petals. These spores infect the petals and eventually progress into the stem, creating lesions that kill off plant tissue. The hardened lesions return to the soil as sclerotia at harvest, where the cycle begins again.

In 2016, the Canola Council of Canada reported more than 90 per cent of fields surveyed in Western Canada showed symptoms of sclerotinia infection. In 2019, disease prevalence was lower – between 25 and 79 per cent. Wet weather exacerbates the problem.

“One of the major challenges that the canola industry has faced when it comes to sclerotinia is that they don’t thrive on the traditional model for plant resistance, which means it’s been incredibly difficult for breeders to be able to identify single or groups of genes responsible for genetic resistance,” says Mark Belmonte, a professor of biological sciences at the University of Manitoba.

“And from a fungicide perspective, what we’re seeing right now is that some of the traditional fungicides used for sclerotinia are becoming less effective.”

The research uses RNAi, or RNA interference, a natural process by which pieces of RNA can suppress or “silence” gene expression in a targeted organism.

“What’s cool about this technology is that it targets a specific species at the single gene level,” Belmonte explains.

Several years ago, he and Whyard began identifying genes they thought were important for fungal pathogens like sclerotinia to survive and infect plants.

After that, they began to screen through genes using an RNAi-based fungicide; once they found good targets in sclerotinia, they moved the research into transgenics.

“So instead of a spray application, we can engineer the crop to produce these RNAi molecules on its own, so the plant, depending on when it might come into contact with the pathogen, will always be protected,” Belmonte says. 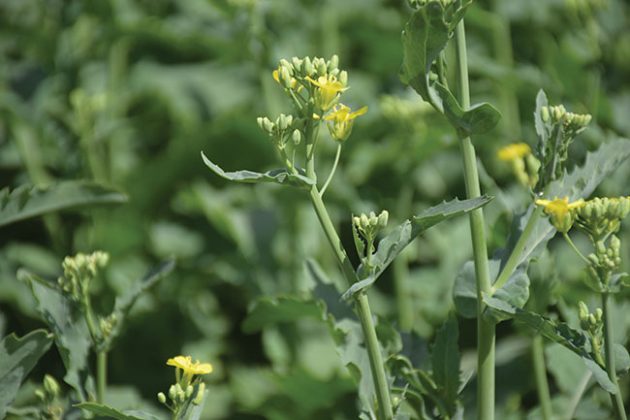 Sclerotinia stem rot, or white mould, can overwinter in canola crops and stay viable in the soil for several years. Photo by Stefanie Croley.

How “silencing” works in canola
So how does RNAi work to amp up a plant’s resistance to disease?

“To build a stronger canola plant, we inserted a double-stranded RNA molecule into the plant and engineered the plant to make this molecule in every single cell across its entire life cycle,” Belmonte explains. “The molecule doesn’t have any impact on the plant itself – there’s no visible difference compared to a plant that was not transformed.

“That was a really important discovery and priority for our team, because the last thing we wanted to do was have a negative trade-off to improve protection against white mould – the goal was to maintain high quality producing plants while bolstering plant defence.”

Belmonte and his group found the molecule they engineered to be expressed in the plant cells did in fact target a specific gene in sclerotinia, reducing the activity of that gene without impacting any other genes in sclerotinia. It also had no off-target effects on other fungi, nor did it have a negative impact on beneficial soil or plant microbes.

The technology doesn’t confer true resistance, but rather improved tolerance to sclerotinia; it’s intended to be used as part of a larger pest-management package, including rotation and the use of fungicides.

Right now, Belmonte and his collaborators are working with a major multinational industry partner to accelerate the technology and hopefully bring it to farmers’ fields within the next decade. In general, he says, it takes eight to ten years to bring a technology like this one from gene discovery to commercial acceptance.

Belmonte says the process is a long one, mainly because the plants they’re engineering fall under a “novel” category, which means they’re subject to a more extensive regulatory process through Health Canada’s Pest Management Regulatory Agency. This includes safety testing to ensure there are no off-target effects, and that the product will be on par with other commercially available products in the marketplace.

RNA technology has been around for more than a decade, and it’s been used not only to protect many different crop plants from pests and pathogens, but in human health and the development of vaccines. This research represents the first example in canola that’s been published to date, Belmonte says.

And it’s only the start for his lab. They’re working on “stacking” sclerotinia resistance with resistance to flea beetle and blackleg, for example. They’re also working on spray-induced gene silencing for botrytis, a common fungal pest of many fruit and vegetable crops.

The goal, says Belmonte, is to help farmers.

“These types of technologies are actively being worked on here in Canada by scientists who have a deep passion for agriculture and where they see the potential to make a difference within this landscape,” he says.