Scientists in Eastern Canada and on the West Coast are starting to launch a campaign against a highly invasive, tough weed in 2013 with the aid of wire mesh, sap-sucking insects and a certain herbicide combination. 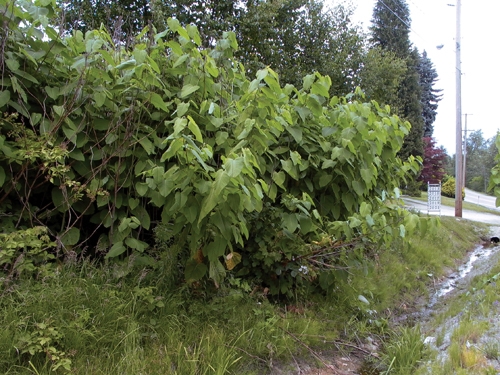 “Knotweed is listed in the top 100 worst invasive species in the world,” says Todd Larsen, master’s-degree candidate at Dalhousie University faculty of agriculture, Truro, Nova Scotia. “Once it gets established, it really takes over, altering the biodiversity. It spreads easily and grows rapidly, to about three metres tall, in clumps and single stalks similar to bamboo. Its tops die off with every frost, but it stores energy in the roots.”

Specimens were brought to Europe in the late 1800s as ornamental plants, and then to North America. The plants could form a privacy screen, or hedge. An established patch is virtually impenetrable after it emerges in spring. When it dies off in late fall, the collapsed vegetation is infamous for blocking waterways and pipes.

“In areas that are cultivated or mowed every year, it doesn’t get a chance to establish,” Larsen says. However, it is a serious problem in the biggest park in Halifax, Point Pleasant Park. A province-wide herbicide ban makes the situation even more difficult for public officials.

“They have been looking at different ways to control it,” Larsen says. “They cut it down, put tarps over it and a fence around it. The tarps need to be left there for about five years, so it’s quite an eyesore. It is unlikely that this method will effectively control the plant.”

Impact
Larsen and colleagues have tried to determine the actual ecological impact of knotweed in dense, established stands.
“You can’t walk through it because there are so many stems. There are no other plant species growing in that area, just bare soil. Where it dies in winter, you have a lot of erosion and sedimentation into streams. You also lose plant habitat for other animals,” he says.

Compared to grassland-type habitats with many more plant species, knotweed was the only plant species where it was established. Despite this paucity in plant diversity, Larsen found that knotweed patches provided nesting habitat for cedar waxwing and white-throated sparrow. Insects were abundant, and it provided cover for a thriving population of insect-eating shrews.

It is interesting that certain organisms possibly benefit from this altered, alien micro-habitat, he says. However, if left unchecked, a knotweed patch may spread to cover an entire ecosystem.

A two-hectare knotweed patch in northern Nova Scotia, was estimated to be at least 50 years old. Plants would start emerging in mid-April and be fully grown by mid-June. The huge volume of biomass, however, has very little fibre. A square metre of the wet, fresh aboveground material, with 15 to 20 stems, weighs 10 to 15 kilograms.

Control methods
Tarping and cutting are the primary physical controls that are effective. Burning and digging out the knotweed are ineffective. It is too wet to burn, until it dies off.

Rhizomes (roots) can extend 10 metres away from a single plant and can be two to three metres deep. A centimetre of living rhizome can produce a fresh shoot.

For confined areas, Larsen hopes a wire mesh will bring the knotweed under control. “My supervisor, Nathan Boyd, and I are working on this idea of using a wire grid, a mesh with half-inch spacing,” he says. “The idea is to cut the knotweed down and put the grid over it. New stems will grow through the grid, be girdled by the wire as they expand, and will die. Grass can still grow through and be fine. Our lab started this project in September 2010; we hope to have specific recommendations later this year.”

No herbicides are registered in Canada specifically for knotweed.

Using two alternative herbicide options to glyphosate (Roundup), Larsen launched a three-year research program in 2011.
Imazapyr is a non-selective herbicide used for the control of a broad range of weeds including terrestrial annual and perennial grasses and broadleaf herbs. Larsen tried applications in June, at flowering (September) and just prior to fall frost (October).

Aminopyralid is a selective hormone-based herbicide manufactured by Dow AgroSciences for control of broadleaf weeds on grassland. He applied it in spring as the plant was beginning to sprout.

“Aminopyralid originally appeared the most effective because the plants got knocked out right away. Within a day you could see that the plant leaves were starting to shrivel. For imazapyr it took several weeks to observe any herbicide damage,” he says. However, in 2012, the sites treated with aminopyralid had grown back, somewhat stunted. Nothing returned at the imazapyr site.

“For imazapyr, the best times to apply seemed to be when it (knotweed) was fully grown and when it was flowering. We found that imazapyr is the herbicide that seems to be working well. We need to apply it again next year (2013) and see if it is still having the same effect,” Larsen says. Full recommendations from the research may be released for 2014.

Biological control
Insect ecologist Rob Bourchier began a search in 2007 in Japan for a biological control agent to control the knotweed problem in British Columbia. He applied in October 2012 for permission to release trial populations in 2013.

“The insect is called Aphalara itadori,” Bourchier says. Informally, it’s known as the knotweed psyllid.” The sap-sucking flying insect is native to Japan, where it feeds on knotweed. A high population can kill knotweed.

“Aphalara itadori was released in the UK in 2010. It is the first biocontrol agent released for an invasive plant in Europe. In Canada, the biocontrol program has been running since the 1950s. Over 75 agents have been released, targeting 20 different invasive plants,” he says.

Knotweed psyllid does not occur naturally in North America. It has been in screening trials to ensure that it won’t become a pest here, if it is released.

“As nymphs and as adults, these psyllid suck the sap of the knotweed plant. If you get enough of them on the plant, they will kill it. We demonstrated that in laboratory studies, but we don’t know for sure how well it will work when released in Canada. On the East Coast, an ideal time to release it would be around May 15.”

The proposal is to do between two and six releases. Those populations would be monitored for several years. Since 2010, it has wintered successfully in the UK trials, and those populations are increasing, Bourchier says.

Knotweed psyllid does not appear to have any other host plants available. In a natural cycle, the populations of psyllid and knotweed would stay in balance at a modest, non-intrusive level. “Non-target species that are closely related, like rhubarb, have been tested to make sure the psyllid do not feed on them,” Bourchier says.

The ecologist’s hope is that the psyllid, if it is released in a chosen area with knotweed, will complete a life cycle twice each growing season, and that it will at least seriously weaken the knotweed stands so that other plants can compete. In the best scenario, it would kill the knotweed.