Place phosphorus (P) nutrition with the seed. That’s been the mantra for decades, and while that may still hold for some crops, a review of research shows that side-banded phosphate fertilizer is usually just as good as seed-placed, if not better in some cases.

“There is some research that is being generated, where the placement of P may not be as crucial as we originally thought,” says Rigas Karamanos of Koch Fertilizer Canada at Calgary, Alta. He presented his research at the 2014 Soils and Crops Conference hosted by the University of Saskatchewan (U of S) at Saskatoon.

Karamanos dug through published research and found several studies related to P placement and the impact on yield. In addition, he delved into the Westco database and analyzed the sites that had P placement trials. His intent was to see if side-banded P and seed-placed P performed the same, and if side-banded P could actually deliver better results.

A research trial published in the Canadian Journal of Plant Science in 2008 looked at a 12-year barley rotation at the University of Alberta’s Ellerslie research farm. In the trial, 80 kg N/ha was banded either at 7.5 to 10 cm or 15 to 17.5 cm depth alone or in combination with 40 kg P2O5 per ha (72 lb N/ac at 3 to 4 or 6 to 7 inches alone or in combination with 36 lb P2O5 per acre). The P was either seedrow placed or banded with the N (dual banding), or split half in the seedrow and half in the band.

“In only two years, seedrow [placed] was better than when we split it half and half in the band. In these two years in that 12-year rotation, we had a cool spring and seedrow placement gave the best yield. In the remaining years, though, we had a lost opportunity in that the seed-placed P did not give the maximum yield. It was the P that was banded, or split half in the seed row and half in the band that gave the best yield,” explains Karamanos. “That was music to the ears of my late colleague John Harapiak, who for years had been trying get that message out that side-banded P could produce high yields.” (See Fig. 1.)

Karamanos also dug up a study by U of S soil scientist and professor emeritus Les Henry that looked at P placement in pea. Karamanos says the common perception is that pea is not responsive to P fertilizer because pea are relatively sensitive to P fertilizer in the seedrow. Saskatchewan Ministry of Agriculture guidelines caution that maximum safe rates of seed-placed is 15 pounds per acre actual P2O5 fertilizer, based on knife openers with a one-inch spread on nine-inch row spacing with good to excellent soil moisture.

Henry and coworkers’ research was published in the Canadian Journal of Plant Science in 1995, and it illustrates that seed-placed P doesn’t always provide the best yield response. Experiments with seed placement and side banding of P fertilizer were conducted at three Saskatchewan locations during a three-year period, using pea, lentil and fababean. Monoammonium phosphate (12-51-0) was applied at six rates of up to 44 kg P/ha (90 P2O5 lb/ac).

Stand counts for pea decreased as the seed-placed P fertilizer rate increased, with stand counts reduced by 50 per cent at the 44 kg/ha rate of P. Lentil stand count was reduced by seed-placed P at two of three locations, while fababeans stand was not reduced with seed-placed P. Side-banded P produced the highest pea yield at all sites, while lentil yields were higher at two of three sites with side-banded P. For example, at Saskatoon, yield was about five bushels per acre higher with side-banded P while there was no yield response with seed-placed P. Seed yield of fababeans was unaffected by P placement. (See Table 1.)

“You can see that with seed-placed P in the pea crop, you don’t get any benefit from seed placement, but guess what? When you side band, you get this yield increase,” explains Karamanos. “So sometimes when we think about P and how we apply, it is very much tied to the mentality that P has to be placed with the seed but that’s not always the case.”

Westco research illustrates placement possibilities
A few years ago, Karamanos had a conversation with Agriculture and Agri-Food Canada research scientist, Dr. Guy Lafond (deceased) at Indian Head, Sask. Lafond was interested in conducting research on seed-placed versus side-banded P. Karamanos took the first step by looking into the Westco database and pulling out seed-placed versus side-banded P trials. He found five barley, 13 canola, four wheat and five winter wheat sites from the 1991 to 2000 time frame, with four MAP fertilizer rates, a check with no P fertilizer, and seed-placed and side-banded treatments. The sites were primarily in Alberta, with one site at Yorkton, Sask., in 1996. There was a range of P soil test values, from a low of 1 kg P/ha to a high of 28 kg P/ha (Olsen bicarbonate-extractable P).

All sites were direct seeded into stubble with an air seeder on nine-inch row spacings or a hoe drill with eight-inch row spacings. The trials were managed according to typical agronomic practices, and N and K fertilizer was applied according to soil test results. In the side-banded treatments, P was applied alone in the band, without N fertilizer.

For canola, stand density sharply decreased with increasing P rates when applied in the seedrow but not when side-banded. However, canola yield was not affected by P fertilizer placement. Karamanos says side-banded P did not produce higher yields because canola compensated for the thinner stand with more branching. This result was consistent with other research by AAFC research scientist Sangamesh Angadi at Swift Current. Angadi found that thinner canola stands did not yield less and that greater branching and increased pod retention at each node compensated so that canola yield was unaffected by stand density – especially when the reduced plant population was uniformly distributed. Growers, though, are cautioned to observe safe rate guidelines published by provincial agriculture departments, as there is a tipping point when canola cannot compensate for thinner stands.

Barley and spring wheat were not affected by P placement, confirming their relative high tolerance of seed-placed P fertilizer, up to a point. At 50 pounds P2O5 per acre, wheat yield started to drop off, while side-banded P yields continued to rise in a linear fashion. This is consistent with other research and recommendations on wheat, where the maximum safe rate of seed-placed P is 50 pounds P2O5 per acre.

“This represented the only instance that side-banded P will allow crops to respond positively to greater rates of P fertilizer,” says Karamanos. “In cereals, we may be missing out on yield by not applying higher rates of P, which could be applied in a side band.”

In these Westco trials, the P was side-banded alone, without additional N in the band. Karamanos says that other Westco research looked at the effects of a “hot” band of N restricting P uptake. He says the research found that only if soils were severely P deficient would there be an issue with P uptake. On a sandy soil, anything over 85 lbs N in a sideband with P could create a problem with P uptake. On clay soils, the cutoff was 95 to 100 lbs N per acre on a severely deficient soil.

“If you are in a situation where your soil is not severely deficient, the rate of N in the side band doesn’t really matter,” says Karamanos.

Another long-term (24 years) Westco rotational study also showed that on a severely deficient soil, less than 8 ppm (16 lb P/ac), seed-placed fertilizer did provide a yield benefit, but only in the first three to four years. After that period, side-banded fertilizer performed just as well.

“The moral of the story is that we have to look at crops and the sensitivity of crops. It is not necessarily that the P has to be placed with the seed. Side banding is just as, or in many instances, more effective than seed-placed,” says Karamanos. 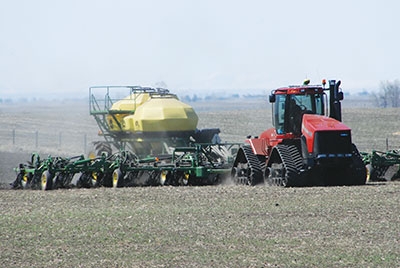 In many cases Place phosphorus (P) nutrition with the seed: that’s been the mantra for decades.