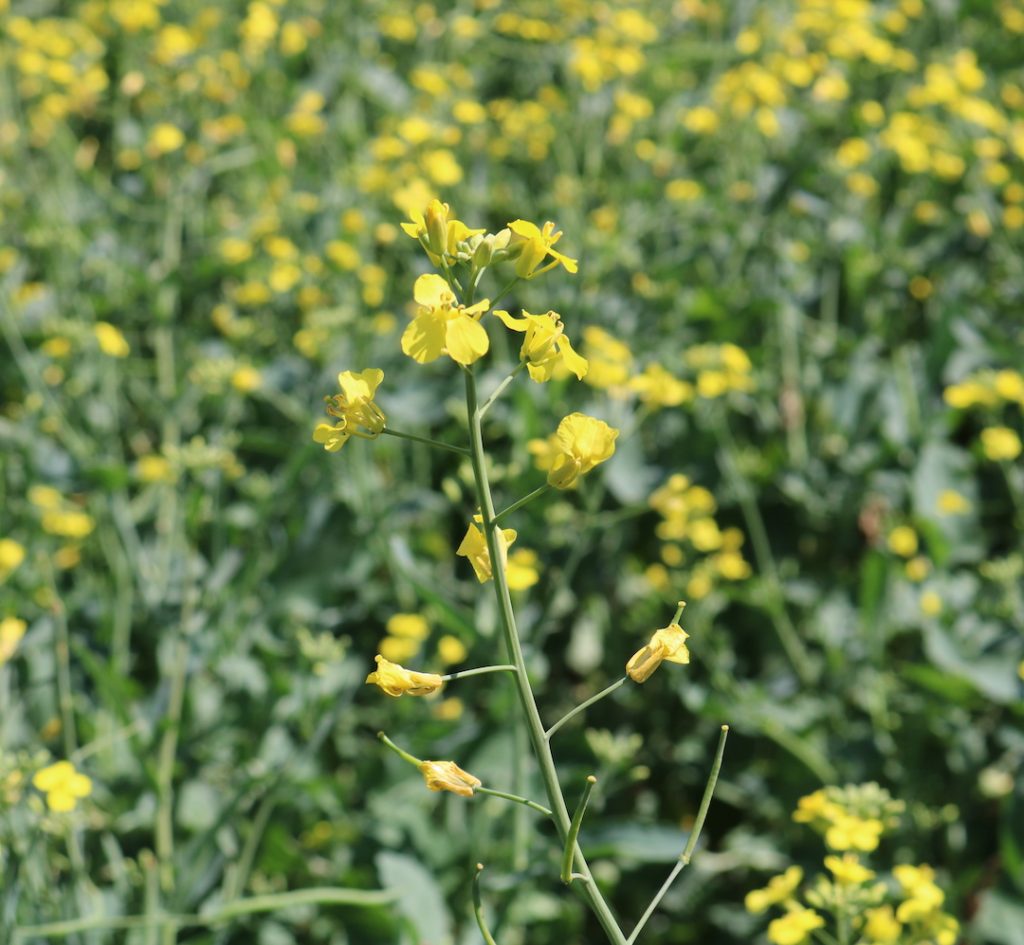 Canola is one of the best known GM crops on the Prairies. Research indicates pro-GM food messages to consumers are more effective if they highlight the direct consumer benefits of these foods. Photo by Stephanie Gordon.

For people in agriculture, there are some compelling arguments in support of growing genetically modified (GM) crops. For instance, research shows GM crops have resulted in substantial production increases, and those increases have made a significant contribution to improving global food security. GM crops also have environmental advantages, such as decreased use of chemical insecticides and herbicides and reduced tillage. But how can consumers be convinced to buy GM foods?

To help answer this question, David Zhang and his research group at the University of Saskatchewan have recently been working on a series of connected studies looking at different aspects of this issue. These studies have been funded through the Social Sciences and Humanities Research Council of Canada, Genome Canada, and the Saskatchewan Ministry of Agriculture’s Alliance for Food and Bioproducts Innovation program.

“A lot of people from the scientific community – in food science, plant science, and so on – are all saying that GM foods are a good thing. But report after report says that consumers are very lukewarm at best and resistant at worst toward this kind of product offering. So I started looking into it,” says Zhang, an associate professor of management and marketing at the Edwards School of Business in Saskatoon.

One of his first studies on this issue investigated the presentation and communication of marketing information about GM foods. “We found that most of the current communication [in favour of GM foods] is focusing on the benefits for producers and the public good, not benefits for consumers,” he says.

“However, when you look at the dynamics of the consumption of GM foods, you start to realize that the people who bear the risk – the perceived risk, or unsubstantiated potential risk, or whatever that risk might be – are the consumers. And they are the ones paying for the product.” So in effect, the marketing messaging is indicating an imbalance: the producers get the benefits of GM technology, and the consumers bear the risk.

So Zhang’s team conducted a study to look at the effects of different marketing messages on consumers’ acceptance of and willingness to pay for GM foods. They surveyed 750 Canadian consumers, splitting them into three groups.

One group saw advertisements promoting benefits of GM foods that might indirectly appeal to consumers, such as eradicating hunger and increasing farmers’ profitability – messages similar to those currently used by GM food proponents. The second group saw ads for non-GM foods focusing on direct consumer benefits, like better taste and enhanced nutrition. And the third group saw ads for GM foods that promoted both direct and indirect benefits to consumers.

As expected, participants in the second group were willing to buy and pay more for the non-GM products with direct benefits to them.

“People would usually interpret this negative willingness to pay as a rejection, but I would look at that differently. I interpret the negative willingness to pay as a consumer demand for a share of the value that is created by the technology,” Zhang notes. “For example, in other industries that are using more efficient technologies for production of goods, like the electronics industry, the production and profitability increase for the industry, and then over time the cost to consumers is reduced as well. I think the value creation of the new technology should be shared.”

Interestingly, participants in the third group were more willing to accept GM foods and were even willing to pay more for such products.

“When we presented messages that this GMO [genetically modified organism] product would benefit you the consumer directly by better nutrition or whatever, and it would also at the same time increase yields and provide additional food security for the all humankind, then the response was very positive.”

In fact this group’s responses were similar to the responses for the group shown the ads for non-GM foods with direct consumer benefits.

When Zhang made public presentations about this study’s results, some audience members commented that they felt consumers were being ‘selfish’ by putting personal concerns over societal concerns like feeding the hungry. So one of Zhang’s graduate students conducted a study to see whether responses to the GM food ads might depend on a person’s own value system and cultural beliefs.

Surprisingly, the researchers did not find many significant differences between people with different values and beliefs. As you might expect, participants who said they were very individualistic, with a strong focus on their individual wellbeing, were looking for direct personal benefits from the food products. But equally, participants who said they had a strongly collective perspective, with a focus on the group over the individual, were also looking for direct personal benefits when it came to buying food for their own consumption.

This additional information reinforces the earlier finding: pro-GM food messages to consumers are likely to be more effective if they highlight the direct consumer benefits of these foods.

In another intriguing study, Zhang and his research group conducted a meta-analysis – an examination of data from many different studies conducted by other researchers – that examined the attitudes of Chinese consumers to GM foods. The Chinese studies had been conducted over the past 20 years, and Zhang’s group looked for trends in consumer acceptance of GM foods over the two decades.

Zhang notes, “One model that has been put forward as a logical flow of progress over time is that we educate people about the different attributes and benefits [of GM food], then we educate them that there is not a lot of risk associated with it, and eventually their attitude will improve. And once their attitude improves, then their purchase intentions will improve.”

But when Zhang and his group looked at the Chinese data, they found one critical difference from this model.

“We found that yes, over the past 20 years, the level of knowledge has improved: Chinese consumers now know more about GMOs. And there has been a reduction of the differences in knowledge between the big cities and the rural communities, so the information is spreading. We also found that attitudes have improved somewhat and people are more open to the idea that GMOs are okay,” he says.

“But what is interesting is that the intention to purchase GMOs has not increased. In fact it has decreased dramatically over the past 20 years. People are more aware of it and they are okay with it, but they won’t buy it.”

More research needs to be done to determine the reason for this trend, but Zhang proposes a couple of possible reasons. “One is that consumers are not always rational. Sometimes we as consumers process information, but we focus on one thing and forget about the other factors. For example, the risk might become the hot-button issue, and once that idea is initiated, nothing else matters,” he says.

“The other possibility is that as income increases, and hunger is no longer the primary concern and a few cents don’t really matter much in the equation, then risk aversion becomes more important in choosing between different food options. Again, we know this occurs and we know Chinese people’s incomes have increased over the past 20 years. So perhaps hunger is no longer the primary concern and other concerns have risen to the top of the agenda, and that has contributed to the reduction of willingness to pay for GM foods.”

Zhang is working with another one of his graduate students on research to explore how pro-GM food messaging might be enhanced.

“We’ve found that the anti-GMO camp have used creative and, I would argue, very effective ways to get their message across. One example is their use of metaphors to grab people’s attention and make people elevate their perceived connectedness to the information that is provided.”

He explains, “GM food is a complicated issue, but by using metaphors, they don’t need to say a lot. For instance, when they call a GM food ‘Frankenfood’, they don’t have to say what a Frankenfood is, and they don’t have to make arguments about why you shouldn’t buy GM foods, which possibly could lead to counterarguments. Instead, just by the mere mention of this kind of metaphor, they plant a seed in your mind. Then you start filling in the blanks about why GMOs are a bad thing. And you will feel strongly about your interpretation of the metaphor because of your pleasure in solving the puzzle about what that metaphor means to you. That is a very strong persuasion technique.”

Zhang also points out, “The current pro-GM marketing strategy for many in the industry involves literally going down the list of reasons why consumers should choose GM foods. And sometimes that can be boring, and sometimes people may start to lose interest halfway down the laundry list.

“So perhaps pro-GM messages could sometimes use a metaphorical approach, presenting GMOs as something that people can relate to positively. And then maybe people will have a more positive reaction to GM foods.”

As a result, Zhang and his student are investigating the potential to use these types of communication methods for pro-GM messages.

Suggestions for the agriculture industry

Based on what he has learned so far, Zhang has two suggestions for the agriculture industry. The first is aimed at the plant scientists, food scientists and other researchers working on developing GM foods. “I would like to see more work on creating new variations of products that have direct, tangible benefits for consumers. We have seen many advances like crop varieties that are more nutritious, fruit that is sweeter, veggies that are bigger or better tasting, but not necessarily in a GMO context. I would like to see more of those types of end-user benefits in the context of GM foods,” he says.

His second suggestion is for the people involved in advertising and communication about existing GM foods. “You should be highlighting the direct benefits that the product would potentially bring to consumers.”

Zhang gives the example of a GM fruit variety that doesn’t go brown. In the usual industry-centric advertising about GM foods, the messages about this product would focus on benefits like a longer shelf life and less shrinkage during transportation. “Those are good attributes, but they primarily benefit the industry – the producers, distributors, wholesalers, retailers – not the consumers directly. Why would I as a consumer want to buy fruit that has been sitting there for a very long time?”

Instead, he recommends that the marketing messages showcase the consumer benefits of non-browning fruit. For instance, an ad might compare three alternatives: an ugly brown fruit salad; a non-brown fruit salad loaded with chemical preservatives; and a beautiful, preservative-free fruit salad made with always-fresh fruit.

So, one key to changing negative consumer attitudes towards GM foods is to put more emphasis on direct consumer benefits right from the product development stage through to the marketing of the final product.