June 22, 2015 - Wheat midge, a non-native pest that feeds on developing wheat kernels, is a serious economic threat to farmers, especially in Manitoba and Saskatchewan. The earliest recorded detection in Western Canada was in 1901, with the first major outbreak in Saskatchewan in 1983.

Today wheat midge (Sitodiplosis mosellana) is a growing problem in Alberta, including Peace River country, and is now starting to attack Montana's wheat crops. Luckily for those farmers, Agriculture and Agri-Food Canada (AAFC) researchers know how to reduce its impact.

Bring in the biological controls: Parasitoids

Parasitoids are organisms that live on or in a host and consume it until it eventually dies. Parasitoids that feed on midge have long been known in Canada, with the most widespread type (Macroglenes penetrans) controlling an average of 31.5 per cent of the wheat midge across Saskatchewan. The estimated value of the parasitoid, due to reduction in insecticide costs in Saskatchewan alone, was estimated to be in excess of $248.3 million in the 1990s. The environmental benefits of using a natural predator are a bonus.

In the 1990s, AAFC researchers worked with researchers in Switzerland to bring another midge-attacking parasitoid to the country. Called Platygaster tuberosula, this parasitoid was released in prime wheat midge country in eastern Saskatchewan. Through the 2000s, the population grew and has been co-habitating well with the other wheat midge parasitoid. AAFC researchers also developed a refuge (an interspersing of susceptible plants in resistant wheat) strategy for the parasitoids and released midge-tolerant wheat varieties during this time.

Entomologists at Montana State University have seen Canada's success with parasitoids and will visit the Saskatoon Research Centre in early July to collect two species of parasitoid wasps from last year's wheat fields (also known as emergence sites). The timing of their hunting trip is critical, as the parasitoids are only in their adult wasp phase for less than two weeks, which is dependent on seasonal temperatures.

AAFC entomologists will benefit from a successful collection by the Montana team by receiving more data on how these introduced parasitoid populations are faring, the economic impact, and the preservation of the species into the future.

Farmers must be vigilant when dealing with wheat midge

While parasitoids may seem like a panacea, they must be carefully managed and considered just one of many ways farmers can control wheat midge. The right environment, including frequent crop rotations, applying chemicals at the right time if economically viable, and following other recommended agronomic practices go a long way in supporting the parasitoid population.

"Our continued efforts at conservation will be important into the future. Namely, it is important to chemically control wheat midge only when it is economic to do so and only during the susceptible stage in wheats (between heading and flowering), and to implement the 'refuge' approach when growing midge tolerant wheat varieties," says Dr. Owen Olfert, research scientist - invasive insect pests and biodiversity, AAFC, Saskatoon, Sask. 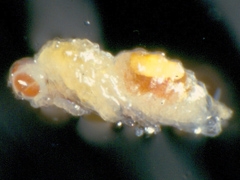