What would the late John Harapiak think of this: Nitrogen (N) losses with banded N that are greater than broadcast N. Harapiak championed deep banding N as a way to improve N-use efficiency and crop yield back in the late 1970s and 1980s, based on many years of research at Western Co-operative Fertilizers (later Westco), the former fertilizer arm of the three Wheat Pool grain companies. His “Fertilizer Forums” promoted the benefits of deep banding over broadcast N. However, new research is starting to show that shallow banding less than two inches deep may incur some volatilization loss.

“The research showing nitrogen losses with shallow banding isn’t contradictory to John’s research, but rather a continuation of the story,” says Rigas Karamanos, a long time Westco researcher who worked with Harapiak and who is now with Koch Agronomic Services in Calgary. “Deep banding was considered to be three to four inches deep, but now many farmers are banding less than two inches deep, and we are finding that banding shallow can expose the nitrogen to volatilization losses.”

In 1985 Harapiak published the average ratings from 28 trials between 1977 and 1980. It showed that a pre-band application of N had a relative yield 25 per cent higher than pre-seed broadcast. Additionally, Westco research looked at N banding at varying depths, and found that banding at depths of four to five inches was as effective as banding at seven to eight inches deep. But practically because of machinery capabilities, the recommendation was to band N about two inches below seeding depth – or about three to four inches – which provided the same benefits as going deeper.

Other research further expanded on the best time and placement method for N fertilizer. An Alberta Agriculture and Forestry document shows that banding produces the best results (see Table 1). Other provinces have similar guidelines with slight variations.

“Deep banding was primarily done in the fall as a means to spread out the workload, but also to preserve the spring seedbed. With the move to no-till and applying all the N at seeding, that has meant some farmers are banding N at depths less than two inches because they want to go fast and get the crop in the ground quickly,” Karamanos says. “It was assumed that shallow banding would be just as efficient, but research is starting to show the N might be at risk of loss. The belief that ‘if it’s in the soil it’s safe’ may be misguided.”

This drive for seeding efficiency is causing researchers to question the efficacy of shallow banding. The cracks in the notion that shallow banded N was safe appeared in a study by Philippe Rochette with Agriculture and Agri-Food Canada in Quebec City. The research found that urea banded 1.5 to two inches deep at 125 lbs N per acre had higher volatilization loss than broadcast incorporated urea at the same depth or even broadcast unincorporated. After 25 days shallow banded urea had lost over 25 per cent of applied N. Broadcast urea treated with Agrotain urease inhibitor had the lowest losses at around five per cent.

Concentrated shallow N bands increase ammonia losses
So what’s going on here? Karamanos explains that when urea is banded into the soil, it is converted to ammonium-N (NH4+) in the presence of the urease enzyme. The concentrated band causes the pH of the soil surrounding the band to rapidly rise. The higher pH results in more of the ammonium-N converting to ammonia gas (NH3), which can be lost to the atmosphere. In Rochette’s research, banded urea increased the pH of the acidic soil at the 0 to 1.5 inch depth from 6.2 to 8.7 over the first five days before it gradually trended downward to about pH 7.2 after 25 days.

A demonstration study by the Ontario Ministry of Agriculture, Food and Rural Affairs at Ridgetown Diagnostic Days, Elora FarmSmart Expo and Eastern Ontario Crop Diagnostic Days in Ontario in 2010 also highlights the challenges of
shallow banding.

UAN liquid N was side-dress, shallow banded with a coulter one inch deep but the band opening did not close sufficiently to cover the UAN. As a result, the shallow band lost 12 per cent more than UAN surface-applied, but UAN side-dress banded at the three to four inch depth had very low losses.

The report concluded that when evaluating ammonia loss from UAN injection at side-dressing, the losses from standard injection (three to four inches deep) were very low, while the surface applied and shallow injection with poor band closure resulted in very high losses. While the demonstration was done to illustrate the dangers of poor coulter and injector set-up in side-dressing corn, it does support the notion that shallow band N is at risk of ammonia loss because the concentrated band can increase the soil pH in the area around the band making it more susceptible to volatilization loss.

At Manitoba Agriculture, Food and Rural Development, soil fertility specialist John Heard also had similar findings as the Ontario study in a demonstration in 2012. Similar to the Ontario demonstration, dribbling UAN into an open, moist slot had the highest relative loss compared to deep banding or surface application.

“This banding was actually opening up a crease through dry soil, dropping liquid UAN onto moist soil below and not closing the trench. So of course N losses were high – as moisture evaporated. However, there was no moisture at the soil surface – so surface UAN losses were not as high,” Heard explains. 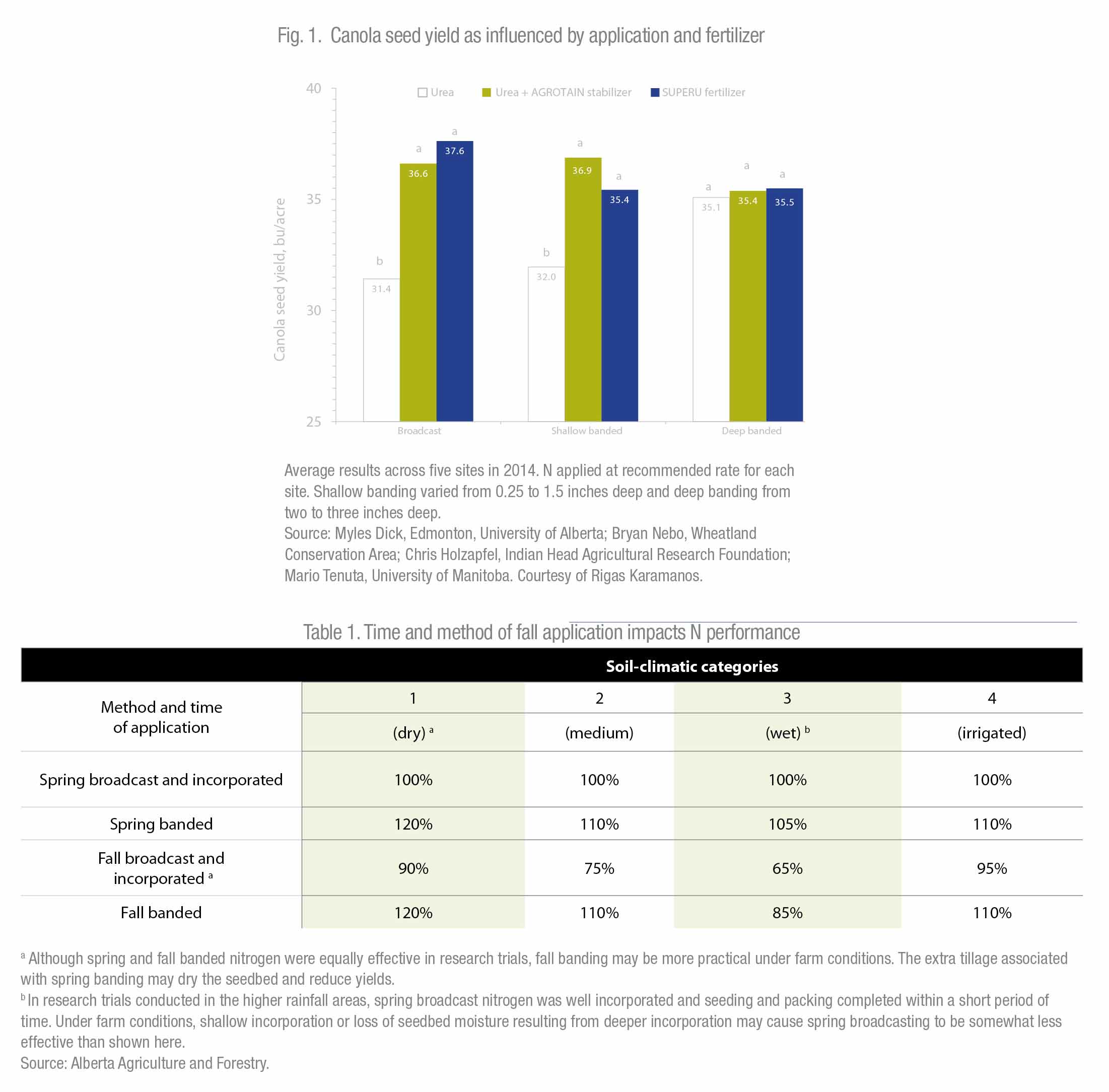 Preliminary Western Canada research finds some loss
Karamanos initiated a research trial in 2014 at five sites across the Prairies at Swift Current and Indian Head, Sask., Breton, Alta., and Carman and Kelburn, Man. In 2015 he had seven sites, one in Alberta, four in Saskatchewan and two in Manitoba. He compared urea, urea+Agrotain, and SuperU fertilizers. Agrotain is a urease inhibitor, and SuperU is a nitrogen fertilizer (46 per cent) with a urease and nitrification inhibitor – both from Koch Industries. The fertilizer was broadcast, shallow banded at 0.25 to 1.5 inches deep, or deep banded at two to three inches deep (initial depths before packing).

His preliminary findings from 2014 (2015 results are still being analyzed) are similar to the Quebec findings. Shallow banded urea was subject to loss but banding two to three inches deep meant similar yields to applying urea with the enhanced efficiency products (see Fig. 1).

Heard also conducted several demonstrations that measured ammonia loss from banded N in 2015.  He worked with two farmers who used SeedMaster and Seed Hawk drills, which typically band N 1.5 inches to the side and 0.75 inches below seed placement. In both cases, the fertilizer was banded about four inches deep, but after packing, the fertilizer was approximately 1.5 inches deep.

“We didn’t find any losses at these two sites. For these farmers under their seeding conditions, they were reassured they weren’t losing N at the depth they were banding,” Heard says. “I think as this type of research moves forward, we are going to have to define what shallow banding means and at what depth do the losses become unacceptable.”

Karamanos cautions his research trial results are preliminary, but the trend is there for continuing to look at N fertilizer placement. He says the potential for loss may be there, and is greater than deep banding, but losses may not occur every year or in all conditions.

If indeed the research finds that banding N less than two inches deep contributes to losses, farmers will look for ways to minimize the losses, including banding deeper at seeding, using urease inhibitors in shallow banding, or potentially broadcasting N with a urease inhibitor. And this continuing story about banding N would probably be just the way Harapiak would have liked to see his work evolve. 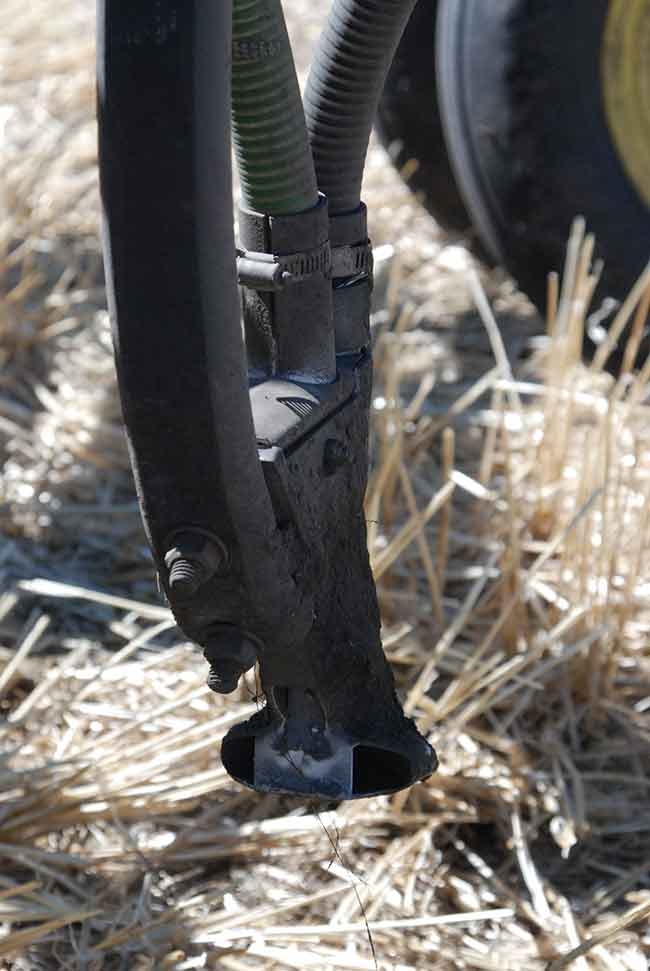 Deep banding three to four inches deep eliminated losses. What would the late John Harapiak think of this: Nitrogen (N) losses with banded N that are greater than broadcast N. Harapiak championed deep banding N as a way to improve N-use efficiency and crop yield back in the late 1970s and 1980s