Features Agronomy Storage
Separating the wheat from the chaff

Dr. Digvir Jayas, vice-president (research and international) and distinguished professor at the University of Manitoba, outlined how forced air ventilation can be used during a presentation made to the Brazilian Postharvest Conference in Maringa, Brazil in 2014. The results (Singh, C.B., D.S. Jayas and R. Larson. 2015. Assessment of fan control strategies for in-bin natural air drying of wheat in Western Canada. Canadian Biosystems Engineering, 56:3.25-3.36) are summarized here.

“Considerable research related to cooling and/or drying of grains by forcing air through bulk grains has been reported and continues to be reported in published literature. Although the process is simple and works well when properly designed and implemented, this simplicity also leads to a lot of misunderstandings about the process,” Jayas says. “Therefore, many systems get designed to force less than optimum amounts of air to complete the task.”

The definitions
Aeration is the forcing of small amounts of air (1 to 3 L/s per m3 of grain) to typically cool grains after harvest using ambient air at temperatures below grain temperature during cooler hours of the day. The aeration can also be used to eliminate temperature gradients within bulk grains and thus to reduce moisture migration, remove spoilage odours from grains, remove fumigants from grains and remove small amounts of moisture from warm grains such as during dryeration (defined below). In colder climates such as in Canada, aeration could also be used to reduce grain temperature to below 10 C to reduce insect activity and population growth. Under Canadian conditions, aeration during winters (when temperatures are below -20 C) can be used to kill all life stages of insects in stored grain.

Chilled aeration is the forcing of chilled air (1 to 5 L/s per m3 of grain), conditioned using a chilling device (air conditioning unit), through bulk grains. The purpose of chilled aeration is to reduce the temperature of the grain below 10 C for slowing insect activity and population growth. Chilled aeration can also be used to store wet grain without deterioration for two to three weeks during which it can be dried to safe moisture contents for storage.

Natural air drying is the forcing of ambient air (10 to 25 L/s per m3 of grain) to decrease the moisture of grain to safe storage levels. The amount of air required increases if the initial moisture content or ambient relative humidity are high, or if ambient air temperature is low. The latter two are dependent on weather conditions following grain harvest.

Near-ambient air drying is similar to natural air drying but air temperature is a few degrees (up to 5 C) above ambient conditions which can be caused by frictional losses from the fan motor assembly when air is pulled over these.

Low-temperature air drying is similar to natural air drying but air temperature is 5 C to 10 C above ambient conditions which can be caused by adding supplemental heat from any source such as electricity, propane, natural gas, wood or solar panels.

High-temperature air drying is the forcing of air (15 to 30 L/s per m3 of grain) at 50 C to 250 C to remove moisture content from grain to safe storage levels. The air temperature and amount of airflow depend on mechanisms of dryers (e.g., concurrent, countercurrent, cross and mixed flow) as well as the initial moisture content of grain and grain type.

The equipment
The main components of the forced air systems are: a flat-bottom storage bin containing a deep layer (more than one metre deep) of grain, a plenum to introduce air into the grain bulk, a fan and duct arrangement to force air through the bulk grain, and vents to exhaust the air once it has passed through the grain. A plenum with a fully perforated floor over concrete (or solid) foundation and levelled grain surface provides most uniform airflow distribution in the grain mass. Thus, fully perforated floors are commonly used but several partially perforated floors are also used in flat-bottom bins. (See Fig. 1 below.) Many farms also have hopper-bottom bins, which are equipped with different configurations of perforated plenums to introduce air into the grain.

The area of partially perforated flooring through which air can be introduced into the bulk grain should be sufficient to avoid formation of stagnant zones in the bulk grain. The size of perforations in the floors should be small enough to support the smallest-seeded grains to be stored in the bin and the number of perforations should be enough (equivalent to >10 per cent of the perforated floor area) to cause minimum pressure drop across the floor.

The fan should be sized properly to ensure sufficient airflow through grain at its maximum depth and for a grain which offers maximum static pressure at that airflow rate while taking into consideration a thorough understanding of type of fan and its characteristics, i.e., relationship between the airflow rate (L/s) supplied by the fan against different static pressures.

The amount of airflow from the fan decreases as the static pressure increases. Thus, a fan sized for shorter depth may not dry grain in the expected time if grain depth is increased. Similarly, a fan sized to provide a certain airflow rate, say for wheat, will not provide the same airflow rate for canola because pressure drop per unit length of canola is 2 to 2.5 times more than for wheat, and fan output would be lowered considerably at the increased pressure offered by grain for all fan types.

The vents should be enough in number and size to avoid stagnation of air in the bin and thus cause minimal back-pressure to be overcome by the fan.

The appropriate amount of airflow through grain ensures proper drying in the specified period. The excess amount of airflow will dry grain sooner but may also result in more non-uniformity in grain moisture content with continuous airflow. Grain mixed with fines (particles smaller in size than grains) offers more pressure drop per unit length than clean grain, and the moisture content of grain also affects pressure drop (Moses et al., 2013). Therefore, a good estimate of static pressure in order to properly size the fan should consider all of the factors that affect pressure drop across grain.

Also, measured fan characteristics, if available, should be used in sizing the fans because at times the values reported by the manufacturers give higher air flow rates than the measured on-site values for the same static pressure. If the difference between measured and reported values is large, then a fan sized using manufacturer’s data will be undersized for actual drying conditions.

Drying zones
In a system with air moving vertically upwards, the bottom layer dries first while the top layer stays close to initial moisture content. As drying progresses, more layers from bottom to top dry, but sometimes re-wet if air relative humidity of incoming air is greater than the equilibrium relative humidity of grain moisture in the layer.

Control strategies
There are many control strategies which can be used for turning the fan on or off during drying, but the best strategy should be the one that requires the least energy for both the operation of fan and the supplemental energy if used; results in most uniform drying; minimizes over-drying and spoilage of grain; and, completes drying within the specified period.

The examples of different fan control strategies are:

The best strategy can be selected by running simulations using historical weather data for multiple years (> 25 years) for several locations based on different climatic zones of a region, with different initial harvest moisture contents, different harvest dates, different amounts of airflow rates through different grains, and for different control strategies.

*Concepts are synthesized from many documents and authors of those documents (too numerous to mention by name) are gratefully acknowledged. This paper also summarizes the work of many graduate students who were supervised by Dr. Jayas and were supported by research grants held by him from many funding agencies including the Natural Sciences and Engineering Research Council of Canada. Many students received funding as part of the University of Manitoba Graduate Fellowship. 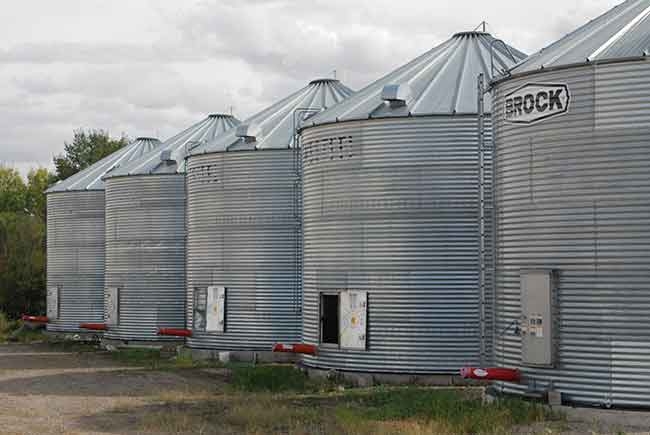 Conditioning grain in bins brings many complexities. When did using forced air through a grain bin become so complicated?