What if corn breeders had access to molecular markers for qualities like Gibberella ear rot resistance and kernel dry down rate? Researchers at Agriculture and Agri-Food Canada’s Ottawa Research and Development Centre (ORDC) have begun to understand the molecular mechanisms influencing these traits, which means corn breeding is about to get smarter – and faster.

“We’re always trying to develop new inbreds of corn with resistance to Gibberella ear rot, so we have several lines developing in our pipeline over the next few years,” says Lana Reid, a research scientist with expertise in corn breeding and genetics.

“We’re the only public breeding program in Canada that releases public inbreds, and the demand has been increasing.”

ORDC’s previous releases include CO441 and CO449, which have the highest Gibberella resistance of any publically released maize lines in the world. This year, the centre is releasing the first lines they’ve ever developed with common rust resistance. Within the next several years, Reid says the ORDC will release between 10 and 20 lines with resistance to common maize diseases.

Reid has collaborated with French, Spanish and Chinese researchers in analyzing the biochemical mechanisms for resistance. “Why is something resistant? Why is it so resistant? These are people coming forward saying this is why,” Reid says.

But important discoveries are being made right at ORDC. Linda Harris, a research scientist in cereal/fungal genomics, is working with Reid on an industry-driven improved corn genetics project. Harris uses next-generation sequencing technology to map Gibberella ear rot resistance in maize.

“A number of different sources of resistance have been identified in cereals, maize and wheat, but we don’t know the exact mechanism of resistance at the molecular level,” she says.

A few years ago, Harris crossed CO441, which has good silk and kernel resistance to ear rot, with B73, the susceptible United States inbred that is the source of the public maize genome sequence. Using a large hybrid ear resulting from that cross, Harris developed 410 separate lines from the seeds of the ear, where each line was descended from a single seed and has a different homozygous mosaic background – or a different mix of the parents’ genetics.

“We screened those 410 lines for silk and kernel resistance over several seasons, used the low-cost genotyping by sequencing method to obtain over 1000 molecular markers across the genomes, and then we looked to see which regions of the genome were responsible for resistance,” Harris says.

The project, which is funded by Growing Forward 2 and the Canadian Field Crop Research Alliance, which includes the Manitoba Corn Growers Association, began in April 2013 and will continue to March 2018.

So far, their findings have been promising.

Mapping resistance
Aida Kebede, a post-doctoral fellow at ORDC, is looking for regions of the genome responsible for resistance. She identified 10 genomic locations providing Gibberella resistance, of which four were common between silk and kernel modes of entry. And she also found some genotypic correlations between disease severity and agronomic traits – meaning that agronomic traits have a role to play in disease resistance.

In other words, Gibberella ear rot resistance and agronomic traits like kernel dry down are interlinked.

To analyze the expression of these traits in maize, Kebede conducted a field experiment for two years before extracting RNA samples. Now, Kebede is using RNA sequencing to try to get to the heart of the relationship between disease resistance and agronomic traits.

Kebede says breeding for Gibberella ear rot resistance is intense, requiring a great deal of resources and human labour. If kernel dry down rate can be used as an indirect selection for Gibberella resistance, the breeding process will be streamlined by reducing the cost for independent disease screening experiments.

Harris says the project is still at the validation stage, but the team hopes their work will soon result in molecular markers that Reid can incorporate into her breeding program. “It’s very labour intensive to screen for resistance. If we can pre-screen for certain markers that would be much easier,” Harris says.

Kebede is hopeful that the program will result in a more efficient breeding process. “Finding the chromosomal regions and the candidate genes will speed up the breeding process, so that transferring resistance genes to hybrid corn will be much easier. That is the achievement. And farmers will get resistant hybrids much faster than before,” she says. 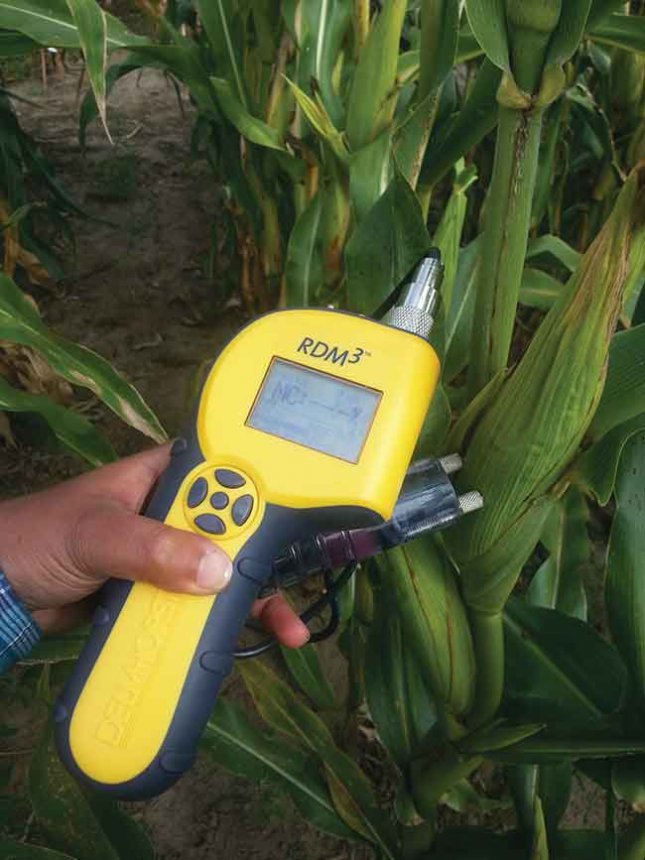 Aida Kebede What if corn breeders had access to molecular markers for qualities like Gibberella ear rot resistance and kernel dry down rate? Researchers at Agriculture and Agri-Food Canada’s Ottawa Research and Development Centre (ORDC) have begun to understand the molecular mechanisms influencing these traits
Print this page