It’s a mixed bag of progress as planting season gets underway across the Prairies, with some producers seeding and others seeing snow. However, with abnormally dry conditions across Western Canada, the predicted snow and rain storms, and the moisture they bring, are welcome news.

In Manitoba, favourable weather and field conditions have allowed seeding operations to begin in most areas, according to the province’s latest crop report. Spring cereals and peas are being seeded in the Southwest, Central, Interlake and Eastern regions; while corn and fababeans have been seeded in the Central and Interlake regions respectively. Manitoba Agriculture is reporting that winterkill in cereals and forages is low in most regions, with some damage assessments in the Eastern region. However, low soil moisture reserves are looking for spring rain to ensure adequate regrowth for pastures and forages.

Manitoba’s Fall Soil Moisture Survey gives producers a good sense of the amount of moisture within the root zone just prior to the winter months and provides a good indication of what can be expected in the spring. The Soil Moisture map from the fall of 2018 shows several wet spots, but most of Manitoba has less than 150mm or between 150 – 225 mm of soil moisture available.

The low soil moisture conditions are seen in other parts of the Prairies after a particularly dry 2018. As of March 31, 2019, the Canadian Drought Monitor shows abnormally dry conditions for the southern Prairies, with moderate drought conditions in northern Alberta and southeastern Saskatchewan. 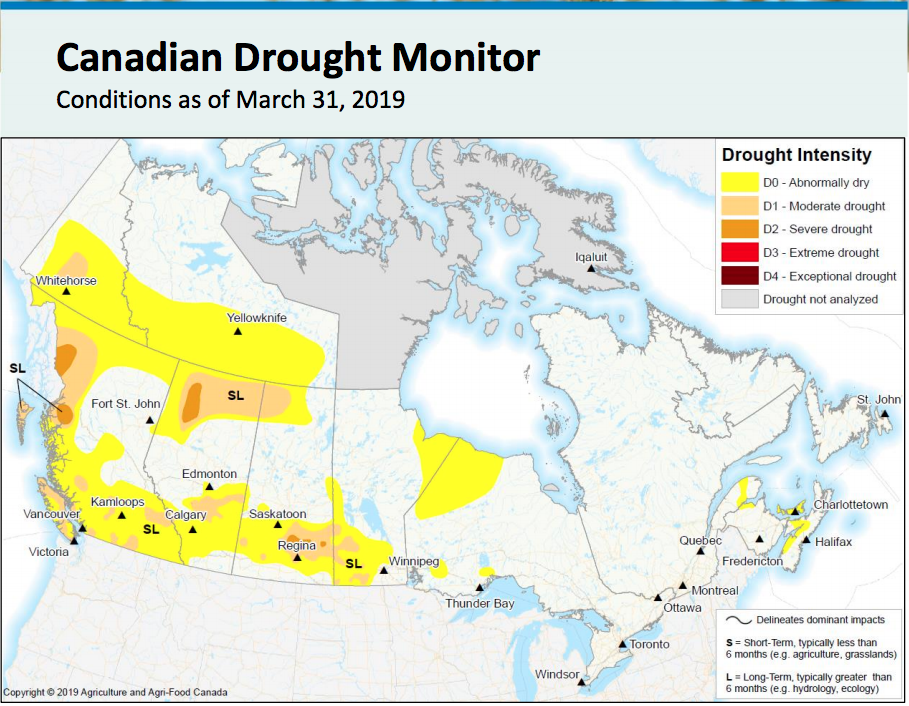 Dry conditions have been a particular concern in south and central Saskatchewan, with fire risks being alerted across the province and a large grass fire affecting Biggar, Sask. in late April. While fire risk in most parts of the province have been downgraded, conditions remain very dry and as of April 26, 115 rural municipalities and 23 towns and villages have a outdoor fire ban in effect. No farm buildings were reported to have been affected by the fires.

Seeding in Saskatchewan is off to a good start and farmers have been able to seed five per cent of the 2019 crop, ahead of the five-year average of three per cent, according to the province’s latest crop report. Field activities such as harrowing, rock picking and fertilizing are taking place, and many more producers have stated seeding will begin in the coming weeks once weather conditions improve.

Much of the southern and western regions of Saskatchewan received a combination of snowfall and rain in the last week of April. Field conditions across province have improved with this recent moisture and cropland topsoil is rated as one per cent surplus, 62 per cent adequate, 30 per cent short, and seven per cent very short.

While seeding is off to a slow start, it could continue to progress slowly as The Weather Network predicts more snow and below-seasonal temperatures for parts of the Prairies. Parts of Alberta, in particular, endured blizzard and winter storm conditions in the last week of April. By the time the snowstorm slowed, areas within Alberta were reporting 10 to 30cm of snow had fallen. Edson received 20cm of snow, Red Deer received 17cm, and Carrot Creek in central Alberta reported 30cm.

Despite this, with abnormally dry conditions over much of the Prairies the May moisture is welcomed prior to seeding. The snow also provides insulation for soils.

The Weather Network is predicting more snow and similar conditions for the first weekend of May, especially in the northern parts of the Prairies, while thunderstorms are predicted for areas such as southern Alberta and southern Saskatchewan.