A healthy, uniform canola plant stand is one of the keys to establishing high yield potential – that’s generally accepted knowledge in the canola industry. And farmers routinely use fungicide seed treatments to help control the seedling disease complex that cause seed decay, damping-off, seedling blight and root rot.

But how impactful are these seedling diseases, and can other management practices help to mitigate their effects? Those are questions that Alberta Agriculture and Forestry (AAF) researcher Sheau-Fang Hwang set out to understand in a series of greenhouse and field trials from 2007 to 2012.

“Seedling blight has a substantial impact on stand establishment and productivity of canola on the Canadian prairies,” Hwang says. “The causal agent of seedling blight of canola at many sites is Rhizoctonia solani, but Fusarium avenaceum and Pythium species are also important.”

Information from the Canola Council of Canada indicate that seed and seedling losses from these diseases tend to be highest under cold wet conditions or when the seedbed is not firmly packed under dry, cool conditions. Not surprisingly, these conditions are common for canola producers who seed early.

Hwang works at AAF’s Crop Diversification Centre North in Edmonton. In 2007, she initiated two trials to look at the effects of seeding date, seed size, seeding depth and seed treatment fungicides on seedling blight of canola. One study looked at R. solani, and the other looked at F. avenaceum and Pythium ultimum. She wanted to find out how impactful the diseases were on canola; how effective fungicide seed treatments were; and if manipulating seeding date, seed size or seeding depth could reduce seedling diseases.

Seeding date
In the seeding date field trial, soil inoculation with R. solani reduced seedling emergence by 96 per cent in 2007, 98 per cent in 2008 and 91 per cent in 2011. Yield reductions were 81, 87, and 93 per cent respectively, relative to the non-inoculated control.

“Seedling blight of canola caused by R. solani can result in poor stand establishment and severe yield loss in Alberta when soil populations of the pathogen are high and conditions are conducive for infection,” Hwang reports.

She adds seedling emergence was greatly reduced in R. solani inoculated plots for all seeding dates, not only those associated with low temperatures or high moisture.

Inoculation with F. avenaceum reduced seedling establishment by more than 50 per cent each year, with corresponding reductions in seed yield ranging from 20 to 86 per cent over the four years of the study in 2007, 2008, 2009 and 2012. Seeding date did not have a consistent effect on seedling blight in trials inoculated with F. avenaceum.

Similarly, with Fusarium and Pythium species, seed size did not affect seedling establishment or seed yield.

Seed depth
In the field trials, two seeding depths were compared at 0.6 inch and one inch. Seeding depth did not affect seedling emergence or severity of root damage caused by R. solani, F. avenaceum or P. ultimum. However, seeding shallow into a firm, warm, moist seedbed is recommended as a good practice for fast, uniform stand establishment.

In the F. avenaceum and P. ultimum trials, canola seedling establishment and seed yield were substantially increased by seed treatment with Prosper FX or Helix Xtra. Both fungicides contain metalaxyl, which has activity against Pythium spp. and R. solani. In the trials inoculated with F. avenaceum, Helix Xtra increased yield by 32 per cent and Prosper FX by 38 per cent, although the difference between the two fungicides was not statistically significant. In the trials inoculated with P. ultimum, seed treatment with Helix Xtra increased seedling establishment by 300 per cent and seed yield by 81 per cent compared to the inoculated, non-treated fungicide seed (Prosper FX was not compared).

“These studies emphasize the importance of fungicidal seed treatments in stabilizing canola stand establishment under seedling disease pressure,” Hwang says. “The observation that P. ultimum is more active at early seeding, while both F. avenaceum and R. solani appear to be favoured by warm soils, indicates that the manipulation of seeding date will not substantially improve canola stand establishment and yield. In addition, manipulation of seeding depth and seed size is unlikely to significantly improve seedling emergence under heavy disease pressure.”

Hwang’s research supports the use of fungicide treatments, but also indicates that more than one species is involved in the seedling disease complex. Based on this research, growers should select a broad-spectrum fungicide with multiple modes of action that control Rhizoctonia, Pythium and Fusarium species. 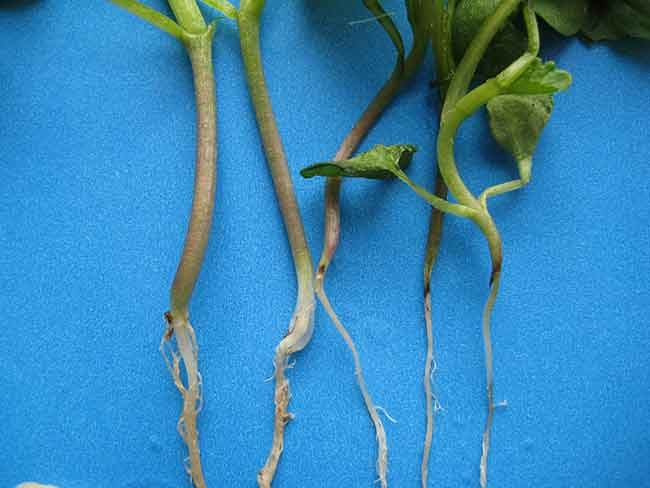