Savings in seed, fuel, and fertilizer. 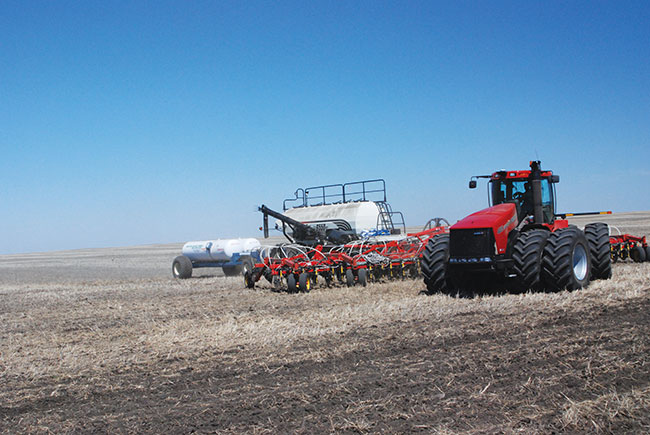 Overlap can occur at headlands, as well as on irregular fields and on fields with obstacles. Photo by Bruce Barker.

Overlap while seeding is a common frustration for farmers, especially on irregular fields and on fields with obstacles like potholes, powerline right-of-way, and rock piles. Over the last 14 years, automated sectional control technologies have been introduced to farmers in Western Canada to help reduced overlap. New research from Prairie Agricultural Machinery Institute found that overlap can be reduced with hefty savings in crop inputs and even greenhouse gas emissions.

“As machinery gets bigger, overlap becomes an even bigger issue,” says Nevin Rosaasen, policy and program specialist with Alberta Pulse Growers. “We got involved in the research because we wanted independent research that could measure the amount of overlap, and how reducing it could reduce crop inputs and greenhouse gas emissions.”

Funding for the PAMI research came from Alberta Pulse Growers, Alberta Wheat Commission, Canola Council of Canada, Olds College, Vaderstad Industries with Canadian Agricultural Partnership funding through Alberta Agriculture and Forestry. The project originally had three phases, but only the first two were completed. The final reports can be found on Alberta Pulse Growers’ website at albertapulse.com/research/sectional-control-technologies.

Phase Two assessed the cost savings and potential environmental effects when using sectional control technology. Three different air seeders of 60-, 84-, and 100-feet width were assessed for overlap at headlands and moving around obstacles. Pea and canola were sown to investigate differences in input savings for large and small seeded crops. Actual measurements from air drill monitors were compared to theoretical measurements. Draft measurements were also conducted.

The main findings of Phase Two weren’t that surprising. The amount of overlap that occurs is higher with wider implements, and the more obstacles in a field, the greater the overlap. How those results translate to the real world depends on the shape of a field and how many obstacles are in a field.

“If I was to provide an estimate, I would say the average overlap on the Prairies is five-to-eight per cent,” Rosaasen says. “On a perfectly square field, you’ll see some overlap on the headlands and maybe on the last pass of the field. But in other areas, like where I farm with my brother at Preeceville in northeast Saskatchewan, certainly some fields have 12 per cent overlap with all the potholes and sloughs.”

“We saved 22 acres of overlap where we weren’t putting on seed and fertilizer. That’s a significant savings,” Rosaasen says.

The research also found a difference in overlap between canola and pea seed. There was more overlap with canola compared to pea. Because of the small seed and lower fan speed, it took longer for canola to clear the distribution system, resulting in canola being seeded further into the overlap.

PAMI’s research also found that monitors can’t be trusted when measuring the amount of overlap. It found that monitors typically underestimate the amount of overlap. For example, on a 160-acre square canola field with an 80-foot air drill and no obstacles, the monitor tested measured 0.13 per cent overlap, but actual field measurements were 1.38 per cent.

Significant cost savings
Phase Two research also estimated the cost savings that can be achieved with sectional control based on 2020 input prices.

“With sectional control, you can see a return on investment in year one. With an overlap of eight-to-11 per cent, we penciled out a savings of $45,000 to $50,000 on 2200 acres,” Rosaasen says. “That is just the fertilizer, as costs have increased almost three-fold this past season.”

The Phase Two report includes a chart of input expenses and the cost savings on a 160-acre field at overlap levels of two, five, 10, 15 and 20 per cent overlap. The savings are calculated for seven different crops and three soil zones. For example, canola sown in the Black soil zone on a field with 10 per cent overlap would have an input cost savings of $3184 based on 2020 input prices.

Phase Three of the project was what had the grower commissions most interested in. It was to look at the greenhouse gas reduction benefits of sectional control. The theory was that by reducing overlap and double application of nitrogen (N) fertilizer, nitrous oxide emissions could be reduced. Carbon emissions could also be reduced with a reduction in fuel consumption.

“We were hoping to be able to develop a way to estimate the reduction in greenhouse gases with the implementation of sectional control, but ran into issues with funding for the project. The idea was to come up with a way to estimate the carbon offsets that a farmer could earn with sectional control, to set the stage to build a regulated carbon offset protocol,” Rosaasen says.

“I think it is still a good objective because if you can reduce overlap from eight per cent to one per cent, that can be a significant savings in greenhouse gas emissions.”