Ontario crop researchers are putting the Greenseeker technology under the microscope to see if it can work for the wheat crop.

They’re testing its ability to analyze the nitrogen (N) needs of the crop, which would help farmers apply the right amount of fertilizer.

Peter Johnson, provincial cereal specialist with the Ontario Ministry of Agriculture and Food and Ministry of Rural Affairs, along with Dr. David Hooker of the University of Guelph, Ridgetown Campus, is leading trials to adapt the system to Ontario’s conditions.

Johnson’s goal is to increase profits for farmers by applying higher N rates to areas where the crop will respond while reducing the rates where there’s a lower response.

“At the end of the day, we’re trying to figure out how to have better-targeted nitrogen applications, more yield where possible, less environmental impact where the yield doesn’t have that potential, and more dollars in the grower’s pocket,” says Johnson.

The Greenseeker system from Trimble Agriculture uses optical sensors with an integrated application system to measure crop status and variably apply the crop’s nitrogen requirements. The technology works in real time, allowing the operators to make variable rate app-lications on the go. The sensor uses light-emitting diodes to generate red and near-infrared (NIR) light. The light is reflected off of the crop and measured by a photodiode at the front of the sensor head. Red light is absorbed by plant chlorophyll and healthy plants absorb more red light and reflect larger amounts of NIR than those that are unhealthy.

The reflectance values are used to calculate the Normalized  Difference Vegetation Index (NDVI), which is an indirect measurement of the crop’s above-ground growth. By comparing the NDVI of the crop being evaluated to that of an N-rich strip in the field, the technology can be used to respond to field variability.

Ontario researchers are working with an algorithm that was created at the University of Kentucky for soft red winter wheat. Johnson says the trials have been designed to evaluate the algorithm and adapt it to Ontario field conditions.

According to previous research in Ontario’s fixed rate trials, the wheat crop shows a response to 150 pounds of nitrogen 60 per cent of the time. With the Greenseeker’s ability to vary the application rate, Johnson is hoping to apply less nitrogen but still match the yield response of a 150-pound application.

In the first year of the trials in 2013, the system didn’t produce a positive economic response. Johnson suspects that they didn’t set the target rate high enough.

“In many fields, a fixed rate with a higher rate than what a Greenseeker applied was our most economical rate,” he says.

The target was set at a higher rate in 2014, but Johnson was not comfortable with the much higher amount of nitrogen that was applied, which reached 200 pounds in some areas.

While it didn’t achieve the desired results, Johnson is still intrigued by the system.

“I would look at the field, walk it and see a nice uniform field, and then you get the NDVI map and there were all kinds of differences,” says Johnson. “How real are those differences? We don’t know that.”

Dr. Lloyd Murdock, a soil specialist at the University of Kentucky, had a similar experience when writing the algorithm. Murdock received a grant to run experiments with the Greenseeker, which was developed at Oklahoma State University.

Murdock says farmers were generally doing a good job of estimating the amount of N needed for the crop by counting the tillers and looking at the colour.

The method, however, is highly subjective and doesn’t address the variability in the field. “You have an instrument that could actually look at the crop and see what it is doing and make that assumption, not on a subjective factor, but on the factor on how it has grown and what it’s done,” says Murdock.

He evaluated the technology using algorithms developed in Virginia and Oklahoma. Calling the initial results “OK,” he notes that they couldn’t beat the results of the old system.

The researchers applied less N using the two algorithms, but the yields were lower. “When we did the economics, we were getting less money. So it became apparent to us that the algorithm has to be a regional thing,” says Murdock.

In a process to regionalize the system for Kentucky (which took approximately four years), the researchers conducted several small plot trials with different rates of N applied at different times around the jointing stages of the crop. They used hand-held Greenseeker units to record the readings that were then used to develop the algorithm and realize the technology’s potential of applying N more effectively. The algorithm was then tested on farmers’ fields and was found to be better than the old method by raising the yields and economic returns.

“Two years ago, when we had a lot of N carryover from a poor corn crop and lodging of the wheat plant . . . that year was terrible,” recalls Murdock. “But if you used the Greenseeker, it picked up that difference and didn’t put much N on. It’s based on the fact the technology is better than our eyes.”

With a yield gain of about five to seven bushels per acre, Murdock notes that the $20,000 Greenseeker system isn’t for everyone.

Farmers who have 1,000 or more acres and who plant wheat every year would be more likely to see a quick return on the investment.

Johnson’s team is also seeking ways to regionalize the algorithm for Ontario. They’re using hand-held units to record NDVI readings from sites that have received various amounts of N, a method similar to the Kentucky algorithm. The results would then be correlated with the yields.

“If we get enough of these sites, maybe we can actually find out what that curve should look like under Ontario conditions,” adds Johnson.

Another important factor is to ensure that nutrients such as sulphur and manganese aren’t deficient. The Ontario researchers learned that the Greenseeker will read them as a nitrogen deficiency and apply N where it won’t help at all. “We need to make sure that we solve those issues before the Greenseeker technology is going to do what we want it to do,” says Johnson.

In addition to the Greenseeker technology, they’re also flying unmanned aviation vehicles with multi-spectral cameras to see if that might be a more effective way of gauging the variability in the fields.

“Putting a prescription map into an applicator might be just as effective, or even more effective than trying to read it on the go because there is always the challenge of the lag time between the sensor readings and when we change the rate,” says Johnson. “It’s quick, but is it quick enough? There are lots of questions we’re still trying to address.” 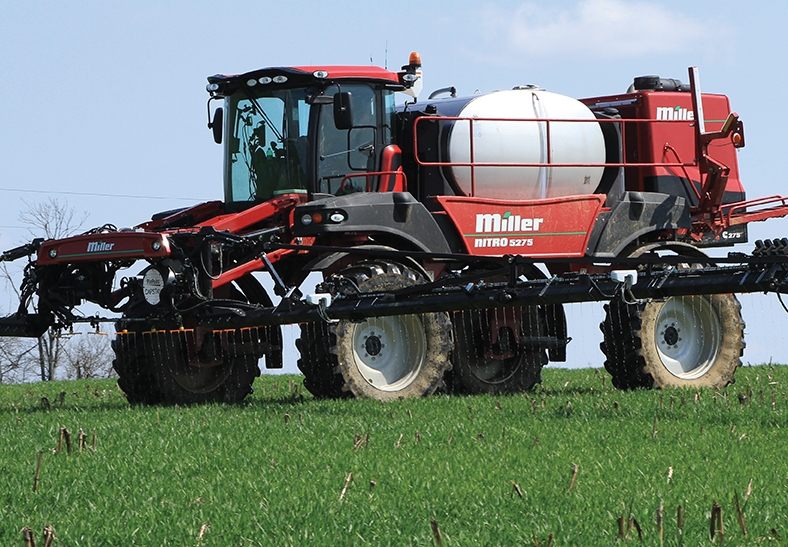 A 120-foot boom equipped with six Greenseeker sensors moves through a wheat field. The system senses the colour and biomass of the crop and sends a signal to a rate controller to adjust product rates up or down. Ontario crop researchers are putting the Greenseeker technology under the microscope to see if it can work for the wheat crop.