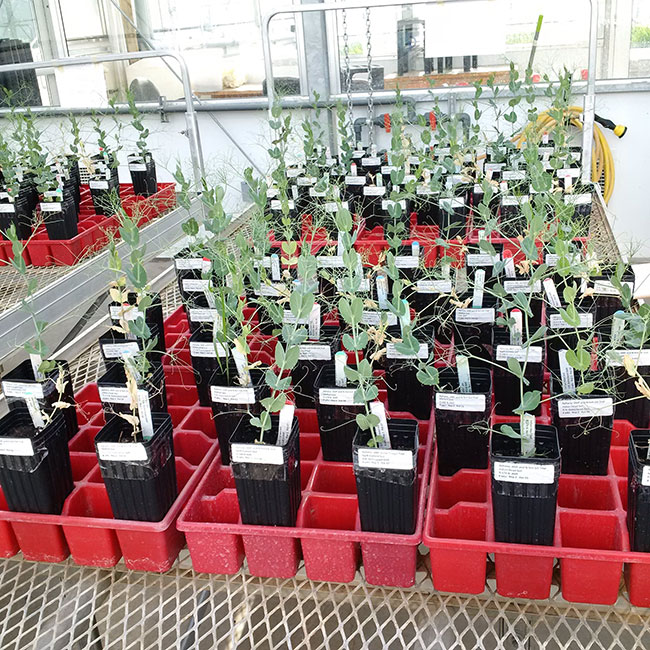 Six- to eight-year crop rotation to manage root rot in pea and lentil crops is a long rotation. But that’s about the only option that pulse growers have when it comes to managing the devastating disease. So, researchers continue to look for control options that can help reduce the damaging impact of the disease.

“Root rot is an important and intractable issue for pulse growers. There is no genetic resistance currently available, and seed treatments are only effective on some of the pathogens and only provide protection for a few weeks after seeding,” says Michelle Hubbard, research scientist with Agriculture and Agri-Food Canada in Swift Current, Sask. “It’s a problem with not a lot of solutions.”

Root rot in pulses is caused by a complex of pathogens including Aphanomyces euteiches, Fusarium species, Pythium species and Rhizoctonia solani. Hubbard, along with colleagues at AAFC research stations in Indian Head and Melfort, Sask., investigated the potential for nitrogen fertilizer application or inoculation with Arbuscular mycorrhizae fungi (AMF) as possible solutions to help pea and lentil crops resist root rots.

Hubbard says nitrogen fertilizer was investigated because some research had indicated that it could cause a “woodiness” of the roots that might impede pathogen penetration and colonization of the root. Nitrogen fertilization could also help improve growth if nodulation was poor. On the other hand, it has been shown to interfere with nodulation, and Rhizoctonia levels on soybean have been found to be higher when grown on high N fertility soils.

In the research literature in other parts of the world, AMF inoculation has been shown to reduce Aphanomyces colonization and growth losses, and may also improve nutrient acquisition and improve abiotic stress tolerance.

“We thought it would be worthwhile to see if either of these two crop inputs could help manage root rot, and if there would be any detrimental effects,” Hubbard says.

The research was conducted in 2018 and consisted of a greenhouse experiment and field trials. In order to ensure root rot levels were high in the plots, pea was grown continuously in the years leading up to 2018. Treatments included inoculation with AMF compared to no AMF, and zero, 60 and 120 kilograms per hectare (kg/ha) of actual N fertilizer application. CDC Meadow pea and CDC Maxim red lentil were grown in the field trials. All treatments were inoculated with a granular rhizobial inoculant.

For the greenhouse trial, soil was collected from the top 20 centimetres at each research site. Peas were grown in small containers, and were well-watered. The greenhouse trial was conducted to ensure that conditions were conducive to root rot development – something that couldn’t be guaranteed under field conditions.

Hubbard says that the Melfort soils had by far the worst root rot infestations. In the greenhouse, all the plants died. At the Melfort field site, she says the plants looked reasonably healthy, but root rot was fairly well-developed in the roots. Pea plants were also more severely affected than lentil in Melfort, possibly because the root rot strains had been selected for the previous pea crop rotations. Indian Head and Swift Current had lower levels of root rot overall.

Inoculation with AMF did not reduce root rot severity or improve plant growth at any of the three sites or in the greenhouse trial. 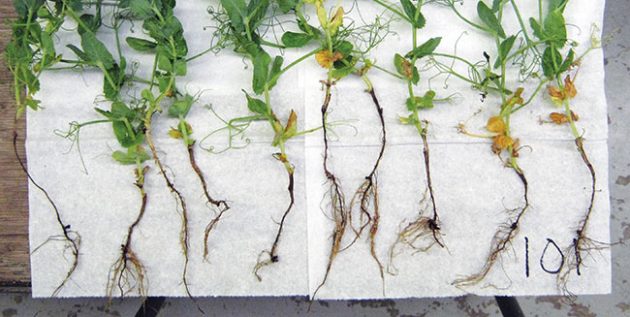 Nitrogen provided mixed results
Application of N fertilizer produced a mixed bag of results. A compounding factor was that, generally, nodulation was poor at all sites. At Indian Head, nodulation was rated at about 3.5 out of 10 on the control plots, and Indian Head had better nodulation than the other sites.

In Indian Head, the 120-kg rate had significantly lower root rot than the control. In Melfort, where the root rot levels were the highest, N application had no significant impact on root rot severity. Nitrogen application also decreased nodulation levels at Melfort in lentil but not pea. In the greenhouses trial, nitrogen did not impact nodulation levels, which, despite very good growing conditions, still had poor nodulation ranging from less than 1 to 4 (scale 0 to 10).

“Based on the results of the research, I really wouldn’t recommend the use of nitrogen or AMF inoculations to manage root rot,” Hubbard says. “These two inputs are added to a list that were tried as a management strategy but didn’t work. The search continues.”