High-value specialty spice crops like coriander and caraway are important diversification options for growers in Saskatchewan. However, one of the biggest challenges in growing a profitable crop is blossom blight disease, which can cause significant yield and quality losses for growers. Through a buyer levy program developed and implemented by a group of Saskatchewan spice buyers and growers, and managed by the Herb, Spice and Specialty Agriculture Association (HSSA), an important research program is underway at the University of Saskatchewan to address the disease.

“In order for Saskatchewan to continue to be a major world player with these crops, a focused effort to address this disease issue is critical,” says Connie Kehler, executive director of HSSA. “Market demand and good crop pricing are there, however this disease is squeezing growers in the market because we don’t have enough production. The early research we did several years ago needs to be refreshed to help us understand the complex of pathogens making up the blossom blight disease. The solution to the problem will be a three-way approach including fungicides through the minor use program, robust crop rotations and ultimately, disease resistance.”

In 2015, a three-year research project was initiated to focus on identifying the predominant fungal and bacterial species of pathogens associated with blossom blight in caraway and coriander, and confirm their contribution to the disease. Led by Sabine Banniza, professor of plant pathology at the University of Saskatchewan, a second component of the project is to evaluate a germplasm collection curated by Plant Gene Resources of Canada for disease resistance traits that could become the foundation of a breeding program for coriander and caraway crops.

“One of our main objectives is to get a better understanding of what organisms are causing the disease throughout the production area,” says Cheryl Armstrong-Cho, a research assistant for the project. “We are using a systematic approach to survey the crops throughout the flowering period to determine which organisms make up the complex causing the disease. We completed disease surveys in 2015 and 2016, and were very fortunate to have Saskatchewan Crop Insurance staff assist with the surveys, increasing the amount of area we could cover. In 2015, there wasn't a lot of disease, however in 2016 we saw a very different picture so we really want to understand what pathogens are major players. We will continue to conduct disease surveys in the 2017 growing season.”

Generally, blossom blight in coriander is believed to be caused primarily by Aureobasidium sp. However, it is also caused by Ascochyta sp. (the primary cause of blossom blight in caraway), as well as various Fusarium species, and Botrytis cinerea and Sclerotinia sclerotiorum. Unfortunately the disease is very complex, particularly in coriander, and some of the organisms are unfamiliar or even incorrectly named, adding to the complexity.

“Proper identification of unnamed pathogens is not a quick, simple process and unfortunately it is not an easy message to communicate,” Armstrong-Cho says. “In caraway, the pathogens we have observed may be what was described before as Ascochyta, but in coriander the picture is more complicated. In 2016 one coriander pathogen was predominant across the growing area, but in a few sites other pathogens may have been at play as well. This mixed bag of pathogens makes disease management that much more difficult.”

The disease surveys in 2016 included the collection of additional agronomic information, like previous crops grown and field history. Armstrong-Cho says the disease doesn’t follow a lot of patterns that are easily picked up and there’s a lot not understood in terms of how the disease spreads (how it overwinters in caraway, for example), among other factors. Once the pathogens causing the disease are properly identified, then progress can be made in breeding or spraying programs.

“We will be repeating the disease surveys in 2017, but also focusing more on lab analyses and germplasm evaluation,” Armstrong-Cho says. “Seed increases have been conducted by Plant Gene Resources of Canada, and the next step is screening for disease resistance. With multiple pathogens causing disease, particularly in coriander, determining the screening process to use is challenging.” Once materials with disease resistance traits are selected, longer-term steps can be taken towards building disease resistance into plant breeding programs for caraway and coriander.

Currently caraway and coriander are grown primarily across the Dark Brown soil zone. “Coriander is a one-year crop, while caraway is grown as a biennial and harvested in the second year,” says Dale Risula, provincial specialist in the crops and irrigation branch of the Saskatchewan Ministry of Agriculture. “In the past, growers often underseeded caraway with coriander, however with the increasing disease concerns, that practice is no longer recommended or used. Growers must also avoid growing other crops in the same [Umbelliferae] family, such as dill, or others that can spread the disease. Pulses and canola may be suitable as candidates for rotations or, in the case of pulses, lentils could be used as a companion to caraway.”

A rotation of two or three years between spice crops can be considered. However, with the recent wet years during the growing season, a minimum of a four-year rotation is recommended. “Crop diversity is also important in reducing the incidence of disease in coriander and caraway; however, it is not without some degree of concern,” Risula says. “Fusarium and Sclerotinia are potential problems with coriander; however, we have not seen any major issues come from these diseases. The most prevalent disease we see in coriander is blossom blight, which affects coriander and caraway alike.”

Through the minor use program, the fungicide Quadris has been available for control of blossom blight in coriander and caraway at early blossom. Another recently registered product is Serenade Max, which a few growers have experimented with and indicated they were pleased with initial results. The products are registered for slightly different organisms causing blossom blight, with Quadris registered for Aureobasidium sp. and Serenade Max for B. cinerea and white mould (S. sclerotiorum). Serenade Max can be applied more than once a season. Growers regularly using registered fungicides should consider alternating available product chemistries to reduce the potential risk of fungicide resistance, which can happen in any crop.

“Without the buyers implementing their levy, we wouldn't have been able to go ahead with this important research,” Kehler says. “In the long term, this project along with minor use program additions, will hopefully enable industry to grow and meet the demand for these crops. It will enable Canada to become a more stable long-term player in the strong specialty caraway and coriander spice markets.” 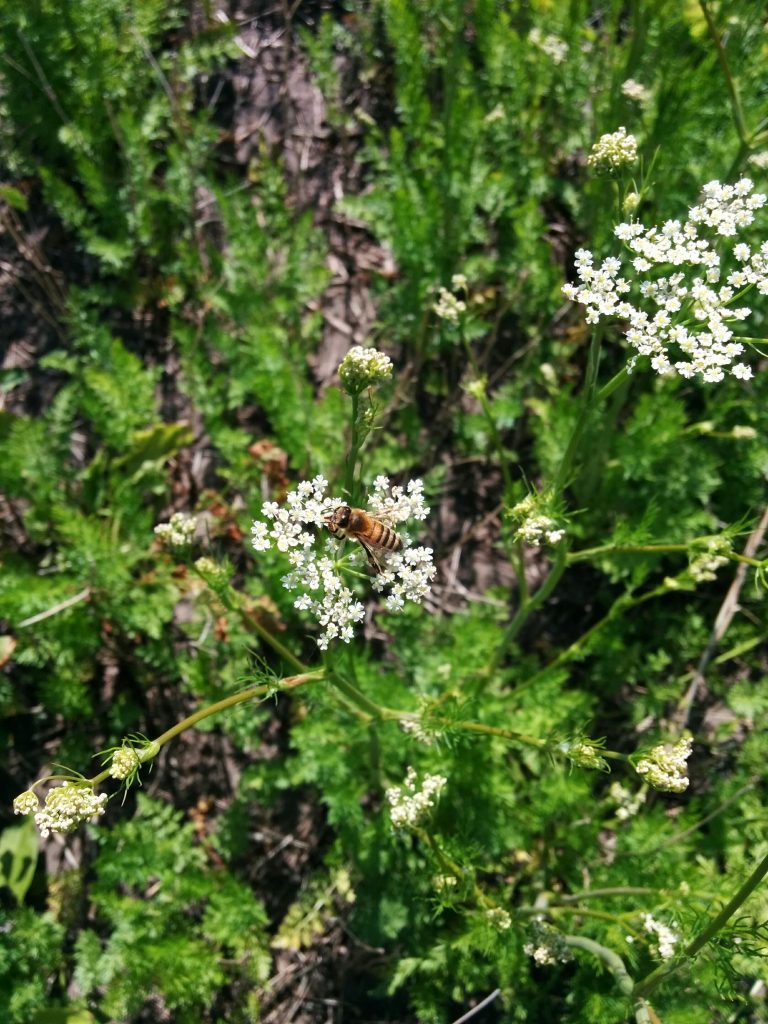