Know the enemy. That’s the goal of a project now underway in Ontario. In this case, the enemy is soybean disease – a continually changing foe, with new pathogen species spreading into different growing areas and new strains evolving to overcome control measures. 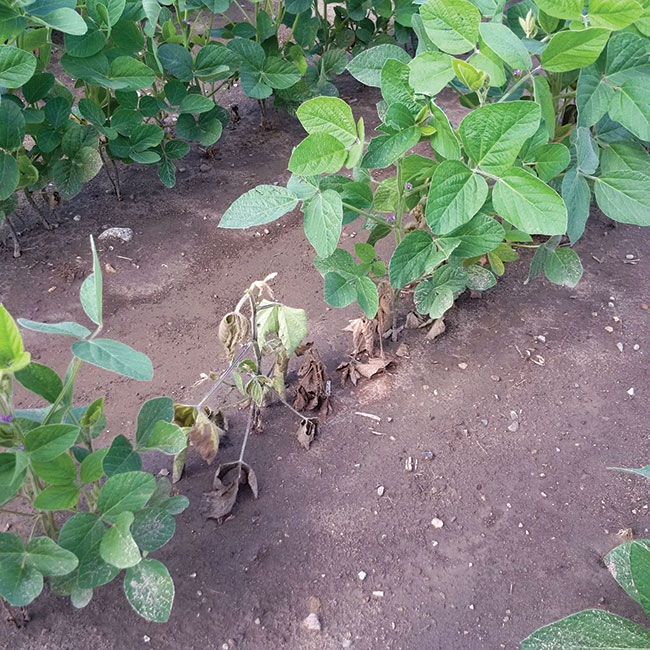 Phytophthora root rot has been in Ontario soybean fields since the 1950s and occurs across the province’s soybean growing areas. Know the enemy.

Owen Wally, a field crop pathologist with Agriculture and Agri-Food Canada (AAFC) at Harrow, Ont., is leading the project with the goal of providing up-to-date information on soybean disease distribution and to start assessing disease risk levels for the province’s growing areas. Results from the project could help breeders, researchers and growers to improve soybean disease management.

A key component of the project is to survey Ontario soybean fields to determine the distribution and levels of soybean pathogens. Wally and his research team are surveying many fields, especially in southwestern Ontario. They also have co-operators going to fields in other parts of the province. Wally notes, “We have pretty good coverage in the south and the east, but we don’t have as many co-operators in the northern part of Ontario. We also get some samples from Quebec, mostly in the western part of that province.”

The project, which runs from June 2016 to March 2019, is funded by Grain Farmers of Ontario, with additional support from the federal government and soybean growers under the Growing Forward 2 program.

In the survey, Wally is looking for all types of soybean pathogens, but he has a particular interest in root pathogens. He explains, “A pathogen like Sclerotinia sclerotiorum, which causes white mould in soybeans, is essentially everywhere and its airborne spores can travel for miles, so white mould’s occurrence is more dependent on the year-to-year variability in the environment. The occurrence of a root disease like sudden death syndrome or Phytophthora root rot in a crop is more dependent on whether or not the pathogen is actually in the field to begin with.”

When the surveyors go to a field, they collect soil samples and, if plants are showing disease symptoms, they collect samples of the plant tissues. Wally notes, “We are trying to get a snapshot of the disease situation at each location at least twice over the three years.” So far, they have surveyed over 100 fields in 2016 and about 120 fields in 2017.

“Last year was very dry so most of the surveyed fields didn’t show a lot of disease symptoms,” he says. “But even in the fields that didn’t show any symptoms, we were still able to detect a lot of the different root pathogens within the soil.”

The regional distribution patterns vary from pathogen to pathogen, as can be seen in the 2016 data for Phytophthora root rot, sudden death syndrome and soybean cyst nematode.

Phytophthora root rot is caused by the oomycete Phytophthora sojae, a fungus-like microbe. This pathogen has been a problem in Ontario for years; it was first observed in southwestern Ontario soybean fields in 1954.

“In 2016, we found the Phytophthora root rot pathogen throughout pretty much the whole province. We found it even in fields that would be low risk because they have the wrong soil type for the disease [which tends to occur in poorly drained clay soils]. So, in years when the weather favours this disease, like 2017 where the spring was really wet, you would get a lot of this root rot.”

Sudden death syndrome, caused by the fungus Fusarium virguliforme, is a relative newcomer to Ontario. Symptoms of this disease were first noticed in 1993 in Kent County, and the pathogen was confirmed in 1996 in Essex, Kent and Lambton counties. The 2016 survey found that the pathogen’s spread was still limited. “Sudden death syndrome was only in the southern-most part of southwestern Ontario, up to Elgin, Oxford and Norfolk counties, and usually in the lighter soils,” Wally says.

Soybean cyst nematode is a soil-dwelling, microscopic plant parasite. In Ontario, it was first detected in 1988 in the Chatham area. Since then, this pest has been spreading across the province’s soybean growing areas with the movement of infested soil.

Wally is collaborating with his AAFC-Harrow colleague, Tom Welacky, on the nematode species collected in the survey. The 2016 survey showed that, although soybean cyst nematode can be found in most soybean growing areas, the highest levels are in the southwest. Wally says, “There are some pockets of it in other soybean growing areas where there are lighter soils. We didn’t find very much of it out near the Ottawa Valley or in Quebec. For the most part, soybean cyst nematode is still more of a southwestern disease. I think it is at lower levels in the other growing areas because they haven’t been growing soybeans nearly as long. [So, the potential disease risk could be quite high in those areas], but it might take quite a few years before they build up a lot of pressure.”

DNA-based analysis
Some of the project’s pathogen analysis, especially for the soilborne pathogens, is done with a DNA-based approach. This approach allows Wally’s team to identify and quantify many of the soybean pathogens down to the species level, but not to the strain, race or pathotype level.

“We extract DNA from the soil sample, and then we use what is called quantitative PCR [Polymerase chain reaction] to determine how much of each pathogen’s DNA is in the soil. Then, by looking at standard curves, we can tell roughly how much of the pathogen is present in the soil,” Wally explains. “Using these molecular techniques, we can process up to 200 samples in a day, whereas if we used cultural methods [growing the pathogens in the lab], it would take us a month to do 200 samples. It definitely speeds things up.”

As part of the project, Wally and his team are fine-tuning these procedures for more efficient analysis of large numbers of soil samples and to provide faster reporting of the results. “We are optimizing the extraction methods for getting the DNA out of the soil samples, which vary from soil type to soil type. We are trying to come up with a standardized method that will work for all the different soil types, and we’ve had pretty good success with that,” Wally says. “And we’ll be determining the minimum amount of a pathogen that needs to be present for us to detect it accurately in a sample and the highest level that we can detect and quantify accurately in a sample.”

Risk assessment
Wally and his team have also started to work towards predicting disease risks in the different soybean growing areas and identifying ways to proactively manage those risks.

“Currently, most of our work on this is in the greenhouse. We take soil from the field and sterilize it using heat sterilization, and then we inoculate it with a known amount of the pathogen. (For example, so many spores of a fungus.) Then we plant soybeans in the inoculated soil, and we see how long the disease takes to develop under the different levels of the pathogen,” he explains. “That will enable us to come up with the amount of the pathogen that needs to be present in a field [to start causing symptoms in soybeans].”

Next steps
Once the current project is completed, Wally hopes to continue and expand this research. “We have put in proposals to look at this issue in more detail. We are also hoping to collaborate with people in Quebec and Manitoba, as well as throughout the north central United States, to get a broader outlook on the distribution of the different diseases and a better idea of where the diseases are moving, especially as soybeans continue to move into areas with shorter and shorter growing seasons,” he says.

“If we know how far and how fast these pathogens are spreading, then we might be able to reduce some of the potential risks [by more proactive development and adoption of appropriate disease-management practices].”