Mario Tenuta is on the lookout for soybean cyst nematode (SCN) in Manitoba. In 2015, Tenuta, Canada research chair in applied soil ecology, and professor at the University of Manitoba, wrapped up a survey that began in the fall of 2014.

The results of that survey were encouraging. "Right now we don't have a documented case of SCN in Manitoba – that's what our research has been showing," he says. "I'm expecting the nematode to come to Manitoba at some point; it's present at the border with three North Dakota counties in certain fields. So I'm expecting it here soon as we have more soybean years in fields."

Soybean cyst nematode is a plant-parasitic nematode that has devastated soybean fields in South America and Asia, and since the 1950s, the United States, where damages can total more than $500 million per year.

While SCN is a major concern in Ontario and recently Quebec, the disease is still absent from Prairie fields. But Tenuta says it will arrive in Manitoba within six to seven years.

Tenuta's lab is the SCN survey headquarters for Manitoba. "We are very fortunate to have Mario's expertise in the area of SCN – he's our one and only SCN guy in Manitoba," says Laryssa Grenkow, research technician for the Manitoba Pulse and Soybean Growers (MPSG).

In addition to support from MPSG, Tenuta's SCN survey project is funded by Agri-Food Research and Development Initiative and Western Grains Foundation.

Along with the survey project, Tenuta is conducting nematode work across Canada with partners Tom Welacky, an Agriculture and Agri-Food Canada research biologist in Ontario, as well as Albert Tenuta, the field plant pathologist for Ontario (and Mario's brother). Among other projects, they are developing new methods for quantification of SCN, including a state-of-the-art species-specific quantitative polymerase chain reaction (PCR) test. That research is funded by Pulse Canada/Saskatchewan Pulse Growers Pulse Science Cluster 2 of AAFC's Growing Forward 2, with industry contribution from MPSG.

Survey results
Tenuta says his team intends to move from a yearly SCN survey to a survey every two to three years, to allow time to analyze results and focus on the latter project in quantification and method development.

Last year, the team processed samples from 50 fields. They targeted fields that have had more than three years of soybean – not necessarily consecutively, he explains, but at some point in the fields' history. "You need to have soybean history for the pest to build up its numbers so we can detect it," he says.

The fields were all located further from the Red River than in the previous survey, as it had focused on that region.

They were unable to find SCN, although they did discover the occasional cyst nematode of other types. "Even those that we did find, the numbers were very small, one or two cysts. If we have an infestation, we'll be coming up with dozens of cysts in a sample, maybe even hundreds. But we're not finding any of that. So far, they're not pests at all. So that's a good thing."

While SCN's progress to the Prairies is inevitable, Tenuta says it is possible to limit its distribution as well as its damage to crops.

A big part of the team's work involves spreading awareness about the disease. "Part of this project is getting out there and talking to growers on tours, field days, and so on," he says.

One important result of that awareness should involve implementing biosecurity measures. "You should have a protocol for each of your fields. Don't move soil between fields, and don't bring soil from the U.S.," he says. "If you've been in fields in the U.S., or if you've purchased used equipment from the U.S., be especially careful. Between fields, limit the carryover of soil, don't drive over fields if you can help it, keep quads from going between fields, and power wash tires, implements and so forth. Be very careful in terms of that transfer."

Growers should also teach themselves to recognize the disease and to know, in particular, what infected roots look like. Tenuta's team has been traveling with jars containing roots infected with SCN to show growers. His lab is willing to inspect suspect fields and analyze samples even between survey years.

The use of resistant varieties will also help slow the buildup of SCN when it hits. In Ontario, Tenuta says the disease took a greater toll than it needed to. "They'd had it for years, but there wasn't a response until there was a yield impact. In Manitoba we don't want to get there. It will be a lot easier for us to control the disease if we jump on it fast. Then growers can put in proper rotations," he says.

Grenkow says though the survey has moved to a two to three year frequency, SCN is definitely on MPSG's radar in the province. "We know it's right across the border and we'll have to be proactive about it. Right now I think every chance we get we're bringing up the story and reminding farmers to look out for it," she says. 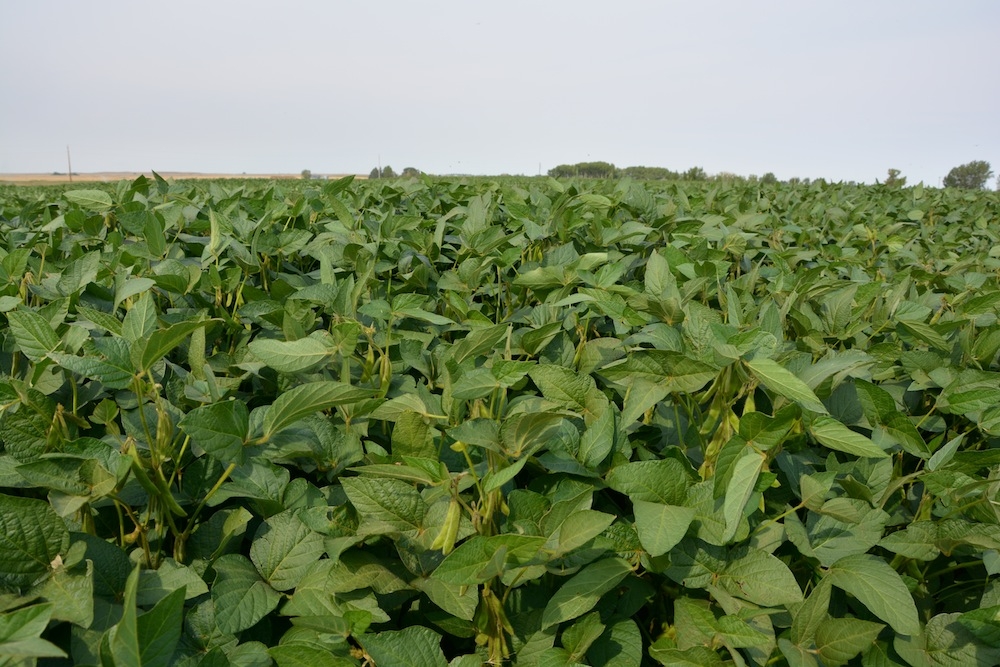 While SCN is a major concern in Ontario and recently Quebec SCN surveys in Manitoba.