Cereal grains and other major food crops can become contaminated with mycotoxins, which are naturally occurring toxins produced by mold that grow in certain conditions. Some of the mycotoxins familiar to the grains industry include Ochratoxin A, Deoxynivalenol (DON) and others, which are not only regulatory and international trade concerns, but also potential health issues. Mycotoxins can develop at various crop stages, pre-harvest, harvest and in storage, but cannot be detected visually and have no taste or smell. 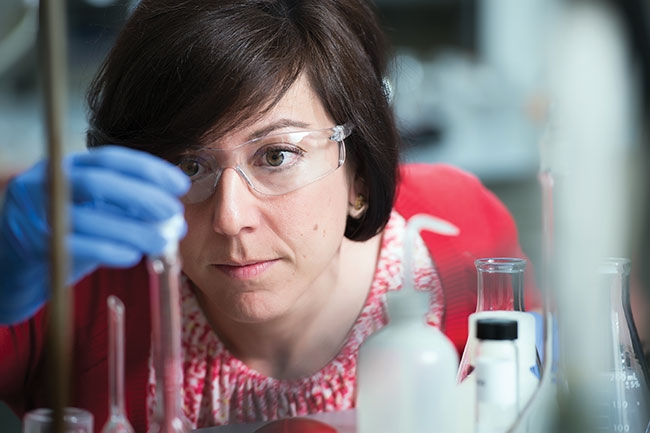 Professor Maria DeRosa working in her lab at Carleton University. A quick and inexpensive visual test for mycotoxins.

Recognizing that testing crops and foods to ensure low levels of mycotoxins is a difficult and often expensive undertaking in laboratories, industry is looking for simple, inexpensive tools to detect and screen for mycotoxins. Maria DeRosa, professor and research scientist at Carleton University, is leading a research project developing quick low-cost tests for mycotoxins that could be used at the farm or grain elevator with minimal training or resources. In particular she is working on a prototype to test for Ochratoxin A (OTA), one of the most abundant food-contaminating mycotoxins, which is found in cereals and cereal derived products, as well as other commodities including coffee, cocoa, wine and spices. This mycotoxin can cause health problems in humans and animals, such as kidney damage and potential human carcinogenicity.

“In previous research, we were working on developing small nanoparticle-based detectors for use in testing for health parameters for cancer, blood sampling and other factors,” DeRosa explains. “We discovered various aptamers, which are small pieces of DNA that are good at recognizing and sticking or binding to target molecules even when they are in a sea of other competing materials. We have identified specific aptamers that are able to quickly recognize and bind to targets such as drugs, proteins, toxins and other factors. This property has been used in a range of sensing applications, including detection based on fluorescence, polarization, energy transfer, and colour change. They can also be used as receptors in diagnostics and sensor devices, which led us down the path to develop a tool to detect mycotoxins in crops, food or even in blood samples.”

DeRosa’s first mycotoxin project focused specifically on OTA mycotoxin in agriculture crops, with the goal to try and develop an inexpensive but robust method of detection. A search through millions of pieces of different DNA resulted in successfully finding an aptamer that would stick to OTA. Using nanotechnology and different particles that glow or change color depending on the environment, researchers were able to determine this technology would work for the detection of OTAs. Metal nanoparticle based colorimetric assays have received considerable attention due to the low cost, simplicity and convenience of these methods.

“Having developed a prototype, our current three-year project is focused on scale-up and validation of this detection or mycotoxin test strip technology,” DeRosa says. “We have narrowed down what we think is the best way to make these tests, and have developed two different test strip approaches or assays using gold or silver nanoparticle-based detection using the OTA aptamer. Similar to a pregnancy test method, the test strip changes color if the results are positive. For example, a grain elevator sample may be able to be developed from the grain dust as a load of grain is being dumped, with a drop of water and then put on the test strip to look for a color change. Both methods are inexpensive, simple, rapid to perform and produce results visible to the naked-eye.”

Next steps
The next step was to develop a cost-effective method to scale-up the technology and produce large batches of the test kits. Equipment has recently been put in place at the university to reliably reproduce hundreds of the test kits at a time. “With scalable test kit technology in place, we are now ready to go beyond lab samples and validate the test strips on real field samples. We are collaborating with another researcher who is working on a different OTA project with a collection of wheat and corn grain samples from multiple locations, and validating our test strip using these large batch, field scale samples. By the end of this final year of the current project, these results will provide a go or no-go decision to our research. We are optimistic that this test strip technology will work on these field samples, but the results of these trials will help us find out for sure.”

If the results are a “go” decision, DeRosa anticipates engaging in another project in 2019 to move outside of the lab completely and into the field in grain elevators and on farms. This will provide the opportunity to validate how user-friendly the technology is outside of a controlled lab and its capability under different environments and uses. “If we are successful, then we really have developed a test kit or tool that will help farmers and the entire supply chain,” DeRosa adds. “A quick and inexpensive visual test will help everyone along the supply chain make better decisions and save money. The test strips are expected to be able to be used at different stages along the supply chain from raw materials to food products, and possibly even consumers. Although the test strips will help with monitoring, screening and general decision-making, they will not completely replace expensive laboratory testing that may still be required on questionable samples or in specific situations.”

Professor Maria DeRosa working in her lab at Carleton University.

Other potential advancements to the test strips could include improving the sensitivity of the test strips to be able to detect specific levels of mycotoxin contamination. DeRosa has also been in discussion with computer scientists about the potential for developing an app that could provide more advanced visual assessment beyond what the human eye is able to see. She is also looking at extending the technology to other mycotoxins of concern, or perhaps even test kits or other tools that could identify multiple toxins at one time in specific commodities. The goal is to design a versatile system that can be used to develop multiple tools and technology to address industry problems in the field.

“So far through our research, we have learned how to identify the right aptamers, how to put these test strips together, which nano particles work best and strategies for detecting OTA,” DeRosa says. “Therefore, it shouldn’t take us as long to apply the technology platform to other mycotoxins in the future, such as Aflatoxin B1, Zearalenone and Deoxynivalenol (DON). This will also help industry be better prepared for potential new mycotoxins or other threats that may move in as a result of climate change or other factors. We have also developed a scalable manufacturing process for the test kit technology, which we expect can be moved out to commercial production in the near future. Our goal is the use science to design a detection system that can make food more affordable and help farmers in Canada, at the same time as save lives in other parts of the world.”