Features Agronomy Fertility and Nutrients
Save on K

If you have been applying potash to spring wheat, you might want to have a serious look at whether it pays. Research has consistently shown that applying potash to wheat in many areas of the Prairies doesn’t provide a yield or economic response on soils with adequate potassium (K) fertility.

The majority of Prairie soils have adequate K levels, as the soils are relatively “young” and based on glacial till soils containing clay that is naturally high in K fertility. Soils deficient in K are generally coarser (sandy) in texture, in the Gray soil zone, or on peat soils.

“The K fertility calibration work done in Western Canada comes up with a figure of 125 ppm as a critical level for when potash might be needed,” Rigas Karamanos, of Koch Fertilizer Canada in Calgary, Alta., says.  “If someone is telling you that you should be applying potash at 350 or 400 pounds per acre [175 to 200 ppm] criteria, then you should be skeptical because they are changing the criteria, and I am not aware of any new calibration work done recently in Western Canada.”

Fertilizer calibration establishes a relationship between a given soil test and the yield response from added fertilizer. It is done by conducting intensive field trials, analyzing soil fertility levels and crop response to applied fertilizer. Much of the K calibration work was done on the Prairies in the 1980s and 1990s.

Karamanos recently published research on applying seedrow K to hard red spring wheat on soils measured with adequate K fertility. He published the research to summarize research trials conducted by Westco Fertilizers, by colleagues Norm Flore and John Harapiak. The research trials were part of a bigger multi-year study with 80 trials on barley, 47 trials on wheat, nine on canola and 12 on pea.

The results for the other crops were published in the Canadian Journal of Plant Science in 2014. Karamanos also wanted to add to the discussion around the recent trend of applying potash, even if soil test levels show adequate fertility above 125 ppm.

Two field experiments with a total of 39 sites were conducted over four years in the early 1990s on soils exceeding the 125 ppm critical level. While the trials are 20 years old, Karamanos believes the results are still valid today, as the agronomic methods used in the trials are consistent with many of today’s practices.

Plots were seeded to a depth of approximately 2.5 cm with a conventional hoe-type drill with bolt on double shoot openers with 17.8 cm spacing. Banded treatments placed fertilizer 2.5 cm to the side and 2.5 cm below the seed. Pest control was conducted using best management practices. Wheat varieties grown were Roblin, Katepwa or Conway.

The analysis of the experiments found no advantage to adding K fertilizer to K sufficient soils.  Karamanos says in the first experiment, days to maturity and yield for wheat were statistically similar whether or not KCl was applied in the seed row. Additionally, there was a statistically significant yield decrease for the Roblin wheat variety as a result of seedrow placement of low rates of potassium fertilizers.

In the second experiment, wheat yield and maturity did not respond to treatments including KCl, K2SO4, or CaCl2 fertilizer applied in the seed row, and did not differ from the check where no K fertilizer was applied. Based on this research, Karamanos questions the practice of recommending or applying seedrow K fertilizer to hard red spring wheat when soils are sufficient in K fertility.

“Twenty per cent is one in five times. When you are at 20 per cent, that is just a random event and can’t be attributed to the fertilizer treatment,” Karamanos explains. “That’s why we do statistics and use 95 per cent probability [P<0.05] as statistically significant.” 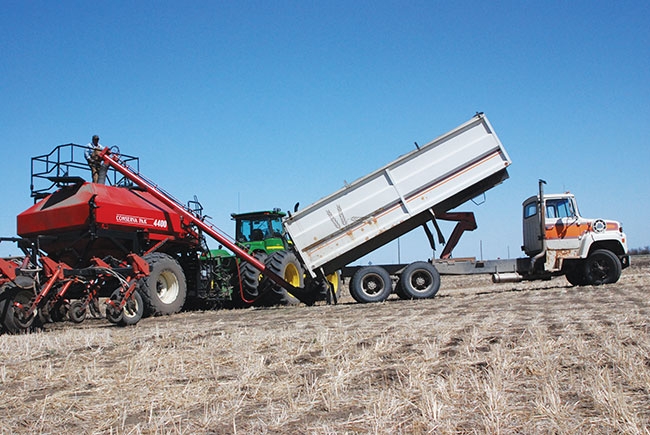 Most Prairie soils do not require potash fertilizer. If you have been applying potash to spring wheat
Print this page