June 2, 2016 - Pea leaf weevil: A survey is being conducted to assess levels of damage and determine distribution. The survey is being conducted primarily in southwestern Saskatchewan, but also as far north as Kindersley/Outlook, and east to mid-way between Swift Current and Moose Jaw. Early reports are of high levels of feeding in several areas in the southwest. Seed treatments are considered the most effective control for the pea leaf weevil; however, if 30 per cent of plants are showing damage, especially damage on the newest leaf or "clam" leaf, a foliar spray could be required. If plants are very young, they are more vulnerable to heavy feeding pressure. Pea plants can outgrow damage once they are past the sixth node stage. Later in the season the larvae can cause damage to the plants by feeding on the nitrogen fixing nodules. Research at Agriculture and Agri-Food Canada (AAFC) suggests that after the 5th node stage, the addition of nitrogen will be of more benefit to protecting yield than an insecticide. Application of an insecticide can only control adult weevils and does not control the eggs laid and subsequent larvae.

Cutworms: Cutworms have been reported in several areas of the province. Affected crops have included pea, lentil, wheat, oats, barley and canola. Due to favourable climatic conditions, cutworms appear to have developed faster than in previous years. Some of the earlier species, like army cutworm, may already be nearing pupation. The immature stages are capable of causing more damage than the younger instars. If damage is significant and re-seeding is an option, seed first, then spray an insecticide registered for cutworms in the applicable crop. Recommended economic thresholds for cutworms are:

Flea beetles: There have been reports of high feeding pressure by flea beetles in some areas. Foliar spray has been required in some cases, as the action threshold of 25 per cent leaf tissue removed was reached. When considering insecticides for control, keep in mind any restrictions associated with the active ingredient (generic products will have the same active ingredient), including maximum number of applications and maximum amount of chemical that can be applied per season. It is still early, and insecticides may be required for other insect pests, such as cabbage seedpod weevil, that will appear later in June and early July.

Tent caterpillars: Tent caterpillars have been reported on trees in high numbers across the province, primarily in urban areas, parks and shelterbelts. Although there have been reports of the caterpillars in alfalfa and canola, feeding damage will not be significant. There may be some reduced radial growth or branch morality, but established trees will be able to recover from feeding damage. Bacillus thuringiensis var. kurstaki (Btk) is the recommended control product for the tent caterpillar, as it is specific to moth and butterfly larvae (caterpillars). Btk is not considered dangerous to pollinators, as they are in a different insect order than moths and butterflies. The kurstaki strain of Bt has an ingestion mode of action, and is not toxic to the bees that may be foraging especially in flowering trees. Although other chemical insecticides are registered, they tend to affect a broad spectrum of insects, including foraging pollinators. 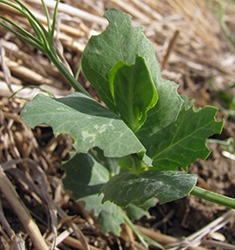 Pea leaf weevil damage that was seen two weeks ago in the south-west. Note there is recent feeding damage on the clam leaf. Saskatchewan insects update.