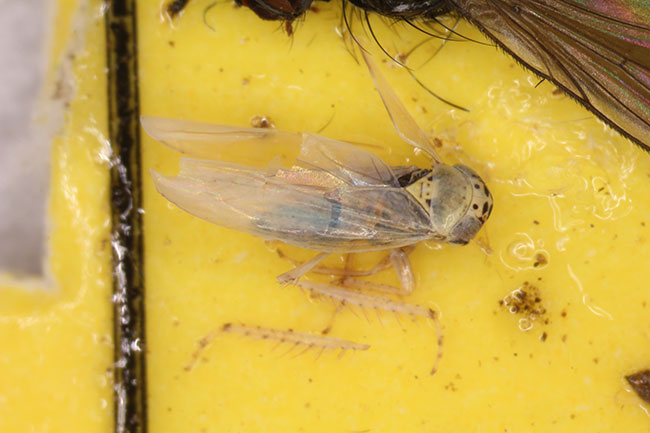 Yellow sticky cards can be placed in fields to detect leafhoppers. Photo courtesy of AAFC Saskatoon.

Saskatchewan Agriculture is now asking farmers to sign up to allow the province’s agricultural department and its partners to conduct crop and pest surveys.

The pest monitoring program provides information for producers and the gathered information is also used to create forecast maps, guide research decisions, detect or track new or emerging pests, and support management decisions. The Ministry of Agriculture partners with Saskatchewan Crop Insurance Corporation, Agriculture and Agri-Food Canada, the University of Saskatchewan, grower groups, the Saskatchewan Association of Rural Municipalities, and contractors and volunteers to execute this program.

Prior to this update, for weed, insect and disease surveys, Saskatchewan Agriculture and its partners would go into randomly selected fields as part of their pest monitoring program. However, if monitoring traps were being set up in a field, they would ask for permission from a producer.

Now, Saskatchewan Agriculture is switching to a “permission-based survey system” and is explicitly requesting that producers sign up through an online form to allow for access onto their land for the province’s pest monitoring program. The sign-up form asks for a producer’s contact information, their rural municipality, and allows the option to mark which crops have been included in the rotation.

“Several of our most important pests of field crops in Saskatchewan are invasive. This means that the locations where these organisms are found can expand quickly,” the website states, justifying why it’s important for producers to sign up to participate in the program. The information produced from the program includes everything from pest watch reports to a clubroot survey.

The update to the program is in response to a new Saskatchewan law, passed on May 16, 2019, that requires people looking to access privately owned rural land to first get permission from the landowner. Other provinces are currently following a similar trajectory when it comes to revising their own trespassing laws. Currently, Ontario is in the process of passing its own legislation that tightens the rules around trespassing on rural land and interfering with livestock transportation. Alberta introduced similar legislation, Bill 27, two weeks ago that would double fines and potentially give jail time to trespassers.