Research is laying the groundwork for managing these often undetected or misdiagnosed pests. 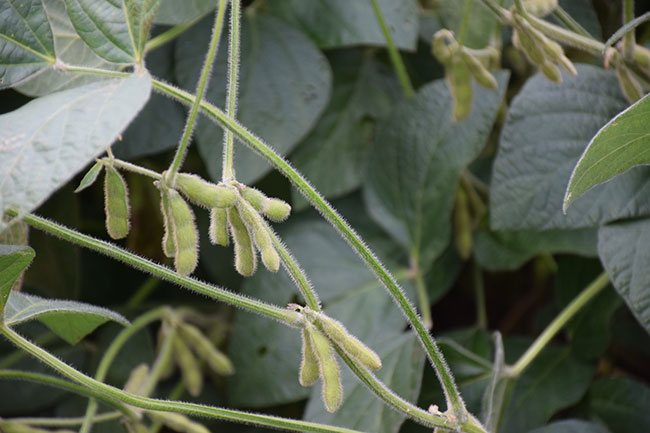 Mario Tenuta is leading a study to determine the effect of the Pratylenchus neglectus nematode on soybean crops. Photo by Top Crop Manager.

Nematodes are often overlooked as a possible concern for Canadian crops, especially on the Prairies.

“Farmers don’t come to us and say, ‘I’ve got a nematode problem’ because the visible symptoms of nematode impacts are very subtle,” explains Mario Tenuta, a professor of soil ecology at the University of Manitoba. “So, we have to go looking for nematode problems.”

Tenuta is now leading a five-year project (2018 to 2023) to look into nematode problems on Prairie pulse crops.

“Not much is known about nematodes on pulses on the Prairies. However, we know from other areas of the world that nematodes can seriously impact pulse yields, and pulses have been grown on the Prairies for long enough that populations of nematode species that attack pulses might have built up to damaging levels.”

His project aims to improve understanding of the possible threat from these microscopic, worm-like plant parasites and to lay the groundwork for reducing the spread of these pests, decreasing the risk of yield impacts and preventing market access issues.

Spotlight on the root-lesion nematode
Tenuta’s current project builds on the findings from previous studies by his University of Manitoba research group and his western Canadian colleagues.

For example, from 2014 to 2016, they surveyed 93 yellow pea, chickpea and lentil fields in Alberta, Saskatchewan and Manitoba, sampling pulse plants, weeds and soils in these fields. They found 20 genera of plant-parasitic nematodes in the surveyed fields. Several fields had high enough numbers of some of these nematodes to potentially cause problems for pulse crops and/or crops grown in rotation with pulses.

One of the most concerning nematodes found in the survey is Pratylenchus, the root-lesion nematode. Through molecular analysis, Tenuta’s group has identified the Pratylenchus species on the Prairies as Pratylenchus neglectus. He says, “We found this nematode in about 20 per cent of the surveyed fields. Moreover, in some fields, it occurred in pretty high numbers, particularly in Alberta.”

Like other root-lesion nematodes, Pratylenchus neglectus causes root damage, such as brownish lesions, fewer root hairs, and reduced lateral roots, in susceptible hosts. This damage can reduce the transport of water and nutrients to the aboveground parts of the plant, leading to symptoms like stunted plants, yellowing foliage, and lower yields. The nematode’s feeding damage can also provide entry points into the root for other pathogens.

To find out whether Pratylenchus neglectus is an issue for Prairie pulses, Tenuta’s group has been working on various studies with Syama Chatterton and Frank Larney at AAFC Lethbridge, Alta., and Tom Forge at AAFC Summerland, B.C.

Tenuta’s group assessed the nematode’s ability to attack and reproduce on chickpea, lentil, pinto bean, soybean, yellow pea, canola and spring wheat in a growth chamber study. Because earlier studies by various researchers had shown that different crop varieties may have different susceptibility levels to the nematode, this study used the variety most commonly grown on the Prairies for each of the seven crops.

“We found that Pratylenchus neglectus really liked to grow, reproduce and build up its numbers on soybean,” Tenuta notes. Although canola, chickpea, pinto bean and wheat were also good hosts to the nematode, soybean was clearly the “winner” in enabling the nematode to increase its population rapidly.

“As a result of those findings, we are now investigating whether this nematode is building its populations high enough to reduce soybean yields,” he says.

“So in 2019, we started a field study at AAFC’s Lethbridge station. I call it a micro-plot study because we are using very small field plots where the AAFC group added the nematode to the soil and then planted the soybeans in that soil. Then they came back and retrieved the soil and the plants, and we did the analysis for the nematode.”

As in the growth chamber study, the 2019 field data indicated Pratylenchus neglectus could reproduce on soybean and reduce the growth of soybean plants. Unfortunately, an early frost meant that soybean yield impacts could not be reliably determined that year. The researchers didn’t conduct the study in 2020 due to COVID restrictions, but they plan to continue it in 2021.

The nematode’s ability to increase its numbers on soybean plants also has implications for other crops in soybean rotations. Tenuta explains, “If the numbers build up to 1,000 or 2,000 of these nematodes per kilogram of soil, we think Pratylenchus neglectus could be problematic for a wide range of crops. I suspect this is the situation with potato, where potato production is affected when this nematode is at very high levels in the soil.”

Tenuta’s group is also continuing to conduct host studies with different crop types. Rotations with non-hosts could be a useful tool in controlling Pratylenchus neglectus because this nematode cannot persist for long periods in the soil without hosts.

He concludes, “Within two years, we expect to have much more information on the damage caused by this root-lesion nematode, its importance in Prairie pulse production and how to manage it with crop rotation.” 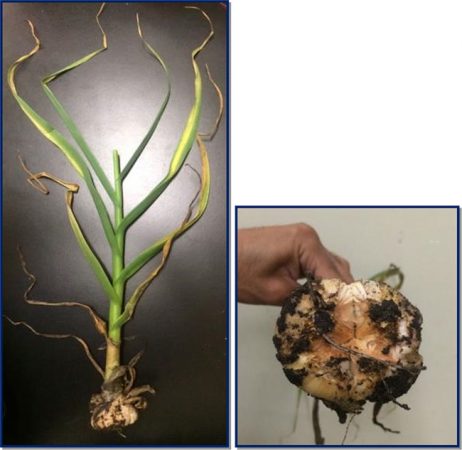 Disentangling a Ditylenchus duo
In recent years, Tenuta’s research group has been tackling – and resolving – a serious nematode issue for yellow pea exports from the Prairies.

“The stem and bulb nematode, Ditylenchus dipsaci, is a quarantine pest. That means many countries, including Canada, do not allow the importation of soil or plant materials, including grains, that contain this nematode,” he explains.

“A nematode species that was thought to be Ditylenchus dipsaci was found at a very small frequency in Prairie field pea shipments to India. India enforced the quarantine very strictly, and those shipments had to be diverted to other ports and fumigated, which was very costly. Furthermore, it delayed delivery of the shipments to India, which sometimes meant the contract terms weren’t met.”

Tenuta’s group worked with the Prairie pulse grower associations and Pulse Canada on this issue. First, his group collected samples of peas, weeds and soils from yellow pea fields across the Prairies. When they found Ditylenchus nematodes in a sample, they used molecular identification to determine the specific Ditylenchus species because several Ditylenchus species look really similar to Ditylenchus dipsaci.

They discovered that the Ditylenchus nematode in Prairie pea fields is actually Ditylenchus weischeri.

Then in a greenhouse host study, Tenuta’s group determined Ditylenchus weischeri does not attack peas, other pulses or other Prairie field crops.

However, it really, really likes Canada thistle. “When we surveyed thistle plants across the Prairies, we found that almost every plant had Ditylenchus weischeri,” Tenuta notes.

“We published our findings and informed CFIA and AAFC. CFIA altered their analysis of export shipments to recognize the weischeri nematode. Previous exports reported to have dipsaci were reanalyzed and were actually weischeri. To my knowledge, CFIA hasn’t found dipsaci in pea exports.”

Tenuta’s current project includes further Ditylenchus research. “Although we were a little set back by COVID, we are now screening other crop types, particularly vegetable crops, to see if any of them are susceptible to Ditylenchus weischeri. We just want to be even more confident that this nematode is not an issue for agricultural crops.”

His group is also working on Ditylenchus dipsaci, the quarantine pest. “This nematode can be devastating for onions, garlic, and other bulb crops like ornamentals such as daffodils, and there can be issues on alfalfa. It is a very serious problem in garlic fields in Eastern Canada and the northeastern United States,” he notes.

“Although not much garlic is grown on the Prairies, there is some. So I was concerned that some local garlic growers might get Ditylenchus dipsaci in their fields, and that it might spread from there by wind or machinery to neighbouring pulse fields.”

Tenuta’s group issued a call to Manitoba garlic growers to find out if any growers were having possible Ditylenchus dipsaci symptoms in their garlic. “A couple of growers contacted us, and we got samples of their garlic. The garlic bulbs were devastated, rotting and chock full of the dipsaci nematode. It turns out that these growers were getting their garlic cloves for seed stock from Ontario,” he explains.

Tenuta’s group hopes to conduct workshops or online presentations for Prairie garlic and onion growers about this issue, to help these growers and ensure that dipsaci doesn’t get into Prairie pulse crops.

“With just a small investment of time and effort in getting the word out to the folks who grow garlic and onions locally on the Prairies, we can safeguard a very big pulse market,” he says.

Tenuta’s research includes another important pulse nematode: soybean cyst nematode (see “Forewarned is forearmed: Soybean cyst nematode in Manitoba” originally published in the December 2019 edition of Top Crop Manager). He notes, “Manitoba has a few fields with this nematode. Right now, the numbers are really low and not affecting soybean yields. But the nematode will definitely spread. So we are continuing our surveys to determine its distribution and population levels. And we are continuing outreach to soybean growers about managing the pest, including biosecurity to limit its spread, crop rotations and resistant soybean varieties.”

Tips for pulse growers
“Scouting for nematode problems is tough. They can be very difficult to diagnose. In general, nematodes tend to cause a weak-performing crop,” Tenuta notes.

With root-lesion nematodes like Pratylenchus neglectus and other nematodes that attack plant roots, he suggests looking for symptoms related to poor root health like stunted or yellowing plants, delayed canopy closure, patchiness of problematic areas in the field, and low yield in those areas. You can also dig up the affected plants and look for symptoms like root lesions, root rots, lack of fine roots, and in the case of soybean cyst nematode, small cysts on the roots.

For nematodes that attack plants’ aboveground parts, such as some Ditylenchus species, look for symptoms like stem twisting or swelling.

Many dfferent problems can cause weak-performing crops, and it can be challenging to find a commercial lab set up to identify different nematode species. So if you see possible nematode symptoms in your pulse field, Tenuta suggests contacting your provincial crop production specialist or diagnostic lab, or your provincial pulse grower association. If they think your plants may have a nematode problem, they can contact Tenuta to arrange for sample testing and diagnosis.