Surveys of sunflower rust in Manitoba show variations in the predominance of different races from year to year, but the overall trend is towards races with greater virulence. 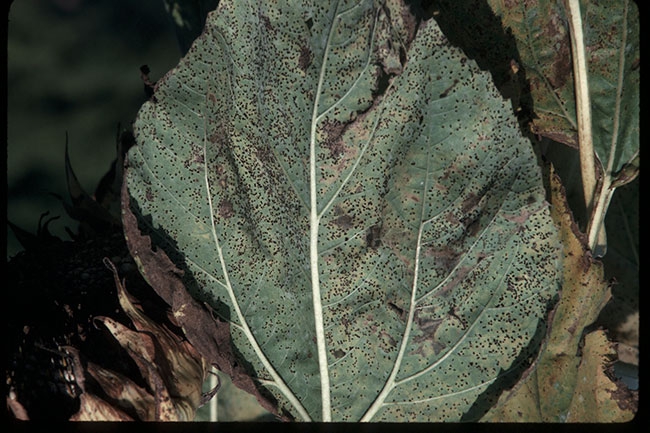 Sunflower rust is one of the main diseases affecting sunflower crops in Manitoba. Heavy infestations cause serious reductions in sunflower yield and quality. The impact of the disease increases when the infection starts early in the growing season, when warm, moist conditions occur during the summer, and when sunflower hybrids susceptible to the prevalent rust races are grown.

“Susceptible hybrids may reach greater than 50 per cent yield loss due to sunflower rust in some years,” says Khalid Rashid, a research scientist with Agriculture and Agri-Food Canada (AAFC) in Morden, Man. He leads the annual sunflower rust surveys.

Those surveys show the disease occurs in the province every year, but in some years it is worse than others. In the last 10 years, the most severe, widespread epidemics occurred in 2008 and 2009. During this decade, Rashid has also seen an increase in the severity of local sunflower rust outbreaks, with the outbreak location varying from one year to another depending on factors like local weather conditions.

“In a lot of years, sunflower rust can be really hit and miss,” says Anastasia Kubinec with Manitoba Agriculture. “But there is always some area where, probably around the middle of July, all of a sudden growers are saying, ‘There is rust in the field, flowering hasn’t even started or it has just started, and we really need to get something done now.’”

Disease detail
Sunflower rust is caused by the fungus Puccinia helianthi. This pathogen is specific to cultivated and wild sunflowers and does not affect other crops.

Rashid explains that the pathogen has five spore stages. “During the summer, the rust propagates itself asexually in the brown stage, which is called the uredial stage. Almost every week to 10 days, you get a new cycle of inoculum in that asexual stage.” Because these brown spores are clones, one generation is genetically the same as the next, although mutations can occur occasionally.

If conditions are warm and humid, this brown stage can produce millions of spores in each cycle. Infection can occur when the temperature is between about 13 C and 30 C, but more infection occurs if the temperature is around 20 C to 25 C. High humidity or overnight dews are necessary for the spores to germinate and infect leaves. “Quite often we get enough dew in the summertime; about six hours or so of dew would be enough to get infection,” Rashid says.

After the brown stage comes the black stage. Rashid explains, “Towards the end of the growing season, when the plants start getting mature and the weather starts getting cold, the fungus changes to the black stage – the telial stage.” This is the overwintering stage, which survives on sunflower stubble.

In the spring, the telial spores germinate, giving rise to two spore stages including a stage that involves sexual reproduction, where genetic recombination and hybridization between different races of the pathogen can occur.

Next comes the aecial or orange stage. Aecial spores usually infect the cotyledons of sunflower plants. These orange spores live for only one cycle and produce the brown spores.

A key aspect of the pathogen’s life cycle is that it can propagate itself sexually and asexually on sunflower. In other words, sunflower rust does not require an alternate host, unlike the cereal rust pathogens; for instance, the sexual phase of wheat stem rust has to occur on barberry plants. So, compared to cereal rusts, sunflower rust has a much greater chance of completing its sexual life cycle. As a result, it has a much greater probability of producing new races, some of which could be more virulent than the existing races.

Not only can new races develop locally, but they can also blow into Manitoba from the United States, which has a much larger sunflower production area and, consequently, a greater potential for generating new races.

Race trends
“Usually when we do our disease surveys in the summer, we collect samples of rust from any rust-infected sunflower crop that we see,” Rashid says. To determine the races in those samples, Rashid’s team inoculates isolates from the samples into an international set of nine sunflower genotypes. Depending on the reaction of each of these differential lines to an isolate, the researchers can determine the race of that isolate.

“Usually we see between at least five and 10 prevalent races every year, although it varies from year to year. Some of those races might have been present in the previous year, and some could be new races,” he explains.

“Races are designated following an international system that uses a three-digit number; the higher the digits, the more virulent the race. In 2016, the most prevalent race in Manitoba was 777, and the next most common race was 735, followed by 727, then 357 and 377.” Over about the past 15 years, the races in the province have gradually shifted from race groups 100 and 500 towards race groups 300 and especially 700.

It is a continuous challenge for breeders and plant pathologists to keep up with the changing races of sunflower rust. They have to look for and test new sources of resistance against the latest rust races and to move those new resistance genes into superior sunflower hybrids, all of which can take many years.

“We do not produce any sunflower seed in Manitoba for seeding; all our seed comes from the United States. So sunflower breeding is a collaborative effort between us and the sunflower industry in the U.S. – the USDA [United States Department of Agriculture], seed companies, breeding companies, and universities in North Dakota, South Dakota and Minnesota,” Rashid  says. “Our rust disease information feeds back to them so they know what rust resistance genes to include in their future hybrids. And under the umbrella of the National Sunflower Association of Canada, hybrids are tested in Manitoba and recommended to growers.” Hybrid testing is done in Manitoba because it is Canada’s main sunflower growing area.

The National Sunflower Association of Canada (NSAC) currently has a program to develop new confection sunflower hybrids for Manitoba, and one of the program’s main objectives is to improve rust resistance. “The program has fully incorporated a new gene for rust resistance (R13) into the program. R13 is considered to be significantly better than R12 in terms of the level of resistance conveyed,” says Darcelle Graham, NSAC’s executive director.

“The hybrids that are being developed are currently not available for purchase; however, as we continue to move lines through the various testing streams, our goal is to release a hybrid that has both downy mildew and rust resistance on a long seed type confection sunflower,” Graham says.

R13 is reported to be highly effective against many rust races, including races found in Manitoba, like 777.

The black spore stage is the overwintering form of the pathogen

Managing sunflower rust
“The tell-tale sign of rust is the pustules on the leaves,” Kubinec says. She is describing the uredial stage, with its reddish brown pustules that speckle the leaves. This is the key stage to monitor for making decisions on fungicide applications.

The pustules first appear in the lower canopy and gradually move up towards the head with each new cycle of infection. Kubinec notes that sometimes, especially when the disease is lower down in a dense canopy, growers may not notice the symptoms until they walk out of the field and see the rusty hue on their clothes. She adds, “When the pustules are halfway up the leaves you’ll probably start to notice them. When the pustules get up towards the leaves right around the head, the disease is really obvious.”

As more and more pustules appear on the plant, the impacts on the leaves and the rest of the plant increase. “In the first cycle of infection, there may not be much disease. But during the growing season, there is continued cycling of the infection. By the end of the season, under severe conditions, rust pustules might occupy 50 per cent of the leaf area,” Rashid notes. “With a heavy infection, the plant turns brown and dries up, looking as if it has been burnt.”

If pustules are found on the lower leaves, then growers should check the field every few days to monitor the progress of the disease in order to make spray decisions. He says, “If you spray when it’s too early in the season and the disease is too light, then you’re not going to get much benefit from that application.”

“When you should get concerned about sunflower rust is when it becomes economical to spray,” Kubinec says. “That’s when the four leaves just below the head have a rust pustule incidence of five per cent or more and the crop is less than R6; we have charts that show what five per cent looks like. So, if the four leaves have lots of pustules and the crop is just starting flowering, then it’s time to spray.” Otherwise, the benefits from the fungicide application won’t cover the cost of the fungicide and the application.

The economic threshold depends in part on the current price for sunflowers as well as the fungicide and application costs, so the recommended pustule incidence threshold may vary between one and five per cent. Rashid also notes that, if the infestation is very severe and the price for sunflower is high, then it may be worthwhile to do two fungicide applications about two weeks apart.

Spraying at or after R6 does not provide a yield benefit. Kubinec says, “By the end of the season, we tend to see a little bit of rust on most sunflowers. However, at that stage, it is not economical to spray and it’s far beyond the stage where it’s really causing any issues to the crop.”

Rashid’s research on sunflower rust includes conducting fungicide trials in Morden to see which products are most effective in managing the disease. The trials include registered fungicides and also experimental fungicides, to help support registration of new products on sunflower. He notes, “Several fungicides are available that reduce the disease and improve the yield significantly.” He advises growers to check Manitoba’s annual Guide to Field Crop Protection for the fungicides currently labelled for control of sunflower rust.

When a rust infection starts early in the growing season, it has a greater potential for causing more severe impacts because the earlier start increases the possible number of cycles of infection. Early rust infections may start on volunteer and wild sunflower plants that have emerged before the sunflower crop is up. Growers may want to control volunteer sunflowers in fields adjacent to the current sunflower crop.

Crop rotation and field selection are important tools for managing sunflower rust. Rashid says, “The telial stage can survive for about one or two winters under our conditions. That is why we always recommend at least two years between sunflower crops in a field. Also, try to avoid planting sunflowers in fields that are adjacent to fields that had sunflower rust in the previous year.” If local inoculum is produced in the current sunflower field or adjacent fields, the pathogen could start infecting the crop around two weeks earlier than inoculum that is blown into the field from further away. Reducing local inoculum will help reduce early infection.

For now, crop rotation, field selection, and fungicide applications based on economic thresholds are key to managing sunflower rust. And hopefully, in a few years, new rust-resistant sunflower hybrids will be coming along.