Oat breeders and pathologists battle to keep up with the changing races of crown rust. 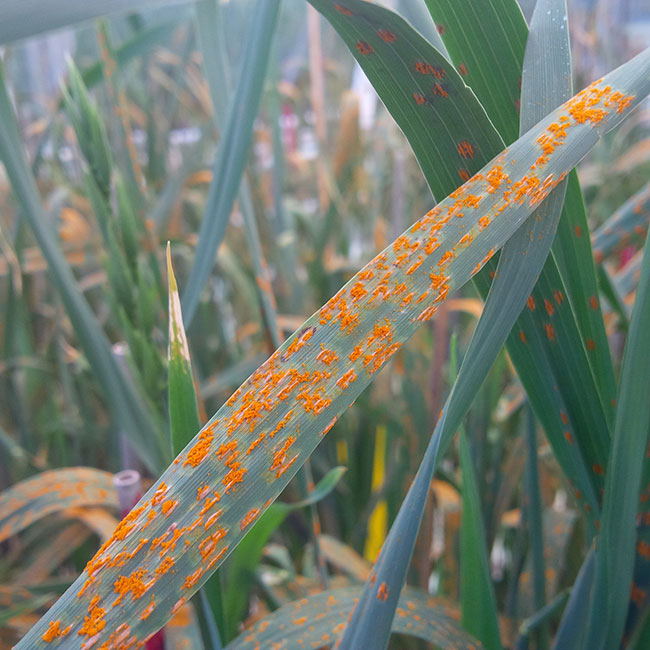 Crown rust is the most important oat disease, affecting both yield and quality. Photo courtesy of Agriculture and Agri-Food Canada.

Resistant cultivars are a great tool for dealing with oat crown rust, but the pathogen is troublingly fast at overcoming resistance genes deployed in these cultivars. Continually fighting back, Prairie researchers are testing the pathogen’s hundreds of changing races for virulence, screening oat lines for resistance to the current races, creating oat varieties with multiple resistance genes, and developing markers for these genes to enable more efficient breeding.

“Crown rust is the most important disease that oat growers have to deal with,” says Aaron Beattie, an oat breeder at the University of Saskatchewan. “It is the most prevalent disease, and it has the biggest impact on decreasing yields. The disease also impacts seed quality, causing a higher percentage of thins and a lower test weight. Both of those factors impact a grower’s ability to get the highest grade for the crop. And if a variety has no resistance to crown rust and a farmer has to use fungicides, then that can delay maturity in the crop, which can impact timely harvest and crop quality.”

“[Crown rust] is the most prevalent disease, and it has the biggest impact on decreasing yields. The disease also impacts seed quality, causing a higher percentage of thins and a lower test weight.”

“Crown rust can cause yield losses of up to 40 to 50 per cent under severe epidemics,” notes Jim Menzies, a plant pathologist with Agriculture and Agri-Food Canada (AAFC) in Morden, Man. “Generally over the last 10 to 15 years, it is estimated that losses caused by crown rust averaged about five per cent per year, with some years being higher, while others are lower. For instance, in 2018, the losses were likely low because of the hot, dry weather.”

The disease is favoured by mild to warm days and mild nights with dews. Infected oat plants develop orange spore-filled pustules, which occur mainly on the leaves. The spores can be carried by the wind for hundreds of kilometres.

Crown rust spores are typically blown northward into Canada each year from oat-growing areas in the southern United States. The Canadian regions most prone to crown rust include Quebec, Ontario, Manitoba and eastern Saskatchewan.

Menzies explains the pathogen’s races in the eastern Prairies are distinctly different from those in Eastern Canada. “For Eastern Canada, the spores come up the eastern seaboard of the U.S. For the eastern Prairies, they come up through the Great Plains. So the two populations are affected by different selection pressures.” Most of the oats produced in North America are grown in the Prairies and the Great Plains, so the pathogen population that follows the western pathway is probably exposed to many more crown rust resistance genes. As a result, the Prairies have more complex races of the pathogen that have evolved to overcome various resistance genes. However, in Eastern Canada, buckthorn is much more common than on the Prairies, so the crown rust population in the East has more races that arise through sexual reproduction.

AAFC personnel have been conducting crown rust surveys in Canada since 1929. The surveys monitor the incidence and severity of the pathogen, identify the pathogen’s races to see if current oat varieties have effective resistance against these races, and determine which resistance genes should be incorporated into new varieties. Menzies has been leading these surveys in recent years.

Rust pathogens have a reputation for diverse populations with many races, but Menzies says the oat crown rust population is probably the most diverse.

“About 80 per cent of the 700 races were detected only once in these six years of the survey. Races that were identified more than once were quite rare compared to what you would find with other pathogens. The most common race we observed was found to be only about three per cent of the isolates we tested.”

“This major change has resulted from the cultivation of oat lines possessing Pc91 in the eastern Prairies on large acreages, such as HiFi and Souris. This has resulted in a heavy selection pressure on the pathogen population to adapt by selecting for races with virulence to Pc91.”

He adds, “This type of selection pressure has been seen before. It led to the pathogen population evolving in the 1980s and 1990s when oat lines with the resistance genes Pc38 and Pc39 were released and grown on large acreages in the eastern Prairies and the U.S. Now, virulence to Pc38 and Pc39 is found in close to 100 per cent of all isolates collected in the eastern Prairies.” 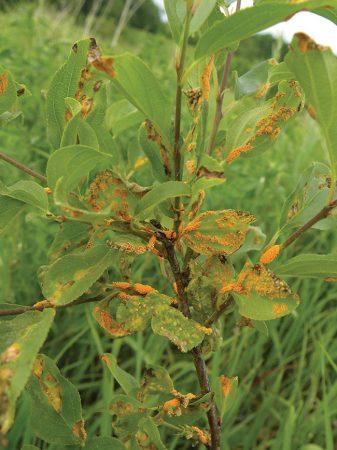 The crown rust pathogen can reproduce sexually on buckthorn, its alternate host. 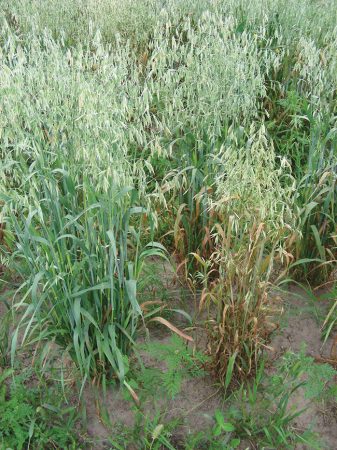 Beattie’s oat lines are screened for their response to crown rust in several crown rust nurseries, including this one in southern Ontario. Photo courtesy of Duane Falk, University of Guelph.

Given such a rapidly evolving crown rust population, Menzies explains that oat breeders need to use several strategies to try to prolong the effectiveness of resistance genes. One approach is to use multiple resistance genes in an oat variety. Another strategy is for breeders to use two or three different resistance gene packages in their oat breeding programs.

“Adult plant resistance is not as strong as seedling resistance, so the pathogen is able to cause some disease on the oat plant, but not a lot.”

Using all these strategies for durable resistance really increases the challenge for breeders. Menzies says, “The more resistance genes a breeder tries to use and the more complex the combinations, the greater and more difficult the work becomes. And it becomes very difficult to assess if the new oat lines have all the different resistance genes you are trying to incorporate into them, and if not, which resistance genes the lines actually have.”

Most of the crown rust resistance genes that Beattie uses in his own oat breeding program are from North American breeding programs. “The pathologists and breeders in both Canada and the U.S. have been the ones working on crown rust the longest and with the most intensity. We don’t find a lot of useful germplasm coming out of Europe, Australia or South America,” he says.

“The breeding program in Brandon, Man. [led by Jennifer Mitchell Fetch with AAFC], works quite heavily on crown rust resistance. And the University of Minnesota, North Dakota and Wisconsin are all really good places to find rust-resistant germplasm.”

Beattie notes that many of the crown rust resistance genes can ultimately be traced back to various wild relatives of cultivated oat (Avena sativa). “Many of the genes that we are using these days have come out of species like Avena sterilis, Avena strigosa or Avena magna. Breeders and pathologists have spent quite a number of years bringing those resistance genes from wild sources into the tame gene pool so the breeders can use them.”

Menzies’ research group evaluates crown rust resistance in oat lines for a number of breeding programs in Eastern and Western Canada each year. “This data is used by the breeders in making decisions on which lines should be promoted through their breeding programs. It is also used in the registration process in evaluating new oat lines for their suitability for registration in Canada. Also, the crown rust ratings for the different varieties published in the provincial seed guides every year are the data that we provided to breeders on the relative resistance of their lines to oat crown rust.”

Beattie is currently leading a five-year project to develop DNA markers for crown rust resistance genes. Breeders use markers to rapidly screen breeding materials for specific traits in the lab, rather than having to take weeks or months to grow seeds into plants and check them for the traits.

Beattie explains that crown rust markers are really helpful in his breeding work. “Especially in this part of Saskatchewan, we don’t always see much crown rust. So in years when there is no crown rust infection pressure, we can’t tell whether or not the lines carry resistance [just by looking for symptoms in the field]. But by using markers that are tied to particular resistance genes, we can select for lines carrying these genes even in the absence of disease pressure,” he says.

“Also, markers allow breeders to incorporate two or three different sources of resistance into the same variety. If you’ve got a marker specific to each of those genes, you can select for each gene in your germplasm. In contrast, if you see a resistant line in a disease nursery, you can’t tell if the line carries just one of those genes or two or all three of them.”

Beattie’s group at the University of Saskatchewan is collaborating on the project with Menzies and Mitchell Fetch with AAFC in Manitoba, and with Kathy Klos, a scientist with the United States Department of Agriculture in Idaho. They are also working with a number of groups from other countries on the project. They have divvied up more than 20 crown rust resistance genes and will be developing markers for as many of these genes as possible.

“The project includes some older seedling resistance genes that have been around for a while and some newer ones that maybe haven’t been introduced into oat varieties yet, and also some adult plant resistance genes. We hope to develop markers that will allow breeders to introduce new genes more easily into future varieties,” Beattie says.

“This project will also give us some information about how the old genes relate to the new ones because we are unsure if some of the older genes are actually the same as some of the newer ones.”

Menzies adds, “From a pathologist’s point of view, developing these markers will aid us in the identification and development of new resistance gene sources because we can quickly screen the sources to find out are if they are new genes or just different combinations of already known genes. That allows us to move forward on some of these new sources if we think they could be effective.”

For this marker project, the researchers inoculate various oat populations with certain crown rust races and assess the populations for disease reaction. Using the DNA from these oat populations, they can identify the genomic locations of the resistance genes and then develop markers for the genes. The goal is to develop reliable, high-throughput marker assays so breeders will be able to quickly check thousands of oat lines for the presence of each resistance gene.

Researchers are striving to meet the ongoing challenge posed by the rapidly changing crown rust pathogen population, to ensure that Prairie growers have access to crown rust-resistant oat varieties – the most effective and economical way to control this important disease.