In July 2011, Iowa State University researchers reported finding field-evolved resistance to Bt corn by the Western corn rootworm (WCR) in some Iowa fields. For Ontario corn growers, the Iowa situation underlines how crucial it is to take steps to slow development of insect resistance to their Bt products.

In both Canada and the US, corn with insecticidal proteins from the bacterium Bacillus thuringiensus (Bt) is widely grown to manage a number of important insect pests. Cry3Bb1, introduced by Monsanto in 2003, is a major Bt toxin for rootworm control and is in products such as YieldGard VT Triple.

Dr. Mark Lawton, Monsanto’s technology development lead in Eastern Canada, considers the Iowa case to be “an alleged field-evolved resistance.” He says, “We’re working with Dr. Gassmann to understand exactly what is happening in that area where he made those observations. We have some additional studies going on in collaboration with him. We do know the area where he made the observations is a part of Iowa with intense corn-on-corn production. As well, there are pretty high populations of corn rootworm in the area, testing the corn year after year. From our end, the jury is still out on whether it’s resistance or just the plant being overwhelmed by the high rootworm population. That’s what the additional studies are going to help clarify.”

Whatever the outcome of these additional studies, Lawton says, “Whether it’s weeds or insects, in a biological system things can evolve and adapt. The Iowa situation is a good reminder about the importance of insect resistance management.”

“I think the Iowa State study should be an important wake-up call for Ontario,” says Jocelyn Smith, program lead in Insect Resistance Management (IRM) at the University of Guelph’s Ridgetown Campus. “We may have taken for granted how well Bt corn products have worked for us to date. We do not expect widespread rootworm resistance in Ontario in the near future, but there are lessons to be learned from these reports.”

Risks for rootworm resistance
All of the problem fields in the Iowa study were planted to corn for at least three years in a row, which encourages high rootworm populations. “Adult corn rootworm beetles lay their eggs in corn fields in the fall, the eggs overwinter there, and the larvae hatch in the spring. The larvae need corn roots to feed on to survive, so planting a crop other than corn following corn will ensure the death of most larvae,” explains Smith.

Secondly the problem fields were planted to the same Bt protein for at least three years in a row. “One of the major factors affecting the speed at which resistance develops is how much pressure you put on the target population. Planting the same toxin year after year in the same field is maximum pressure,” says Dr. Christian Krupke, an entomologist from Purdue University in Indiana.

The most commonly used Bt proteins for rootworm control are Cry3Bb1 and Dow AgroSciences’ Cry34/35. In the Iowa study, the rootworms from the problem fields did not have enhanced survival on Cry34/35 corn. Krupke says, “Neither of those toxins are high-dose, but Cry3Bb1 has been around longer and planted on more acres than Cry34/35. Therefore the overall selection pressure may have been higher for a longer period of time for Cry3Bb1.”

The fact that the Bt toxins for rootworm are not high-dose increases the risk of resistance. “The low- to moderate-dose rootworm toxins may kill about 95 percent of the insects, but five percent of a population of rootworm beetles is actually a large number of insects and some of those could be carrying genes for resistance,” says Smith.

“If whatever is helping the rootworm survivors to survive is heritable, then they have a chance to mate and produce offspring that are also survivors, and so on. This is how resistance develops. For this reason, the refuge is critically important for these particular toxins,” explains Krupke. “We need to have susceptible, unexposed individuals to dilute any resistance gene or genes.”

As most growers are aware, a refuge is a portion of a Bt field planted to a similar corn hybrid that does not have the insecticidal protein. Although the farmers in the Iowa study were not asked about their refuge practices, the researchers note that only 50 percent of Bt corn planted in the US Midwest complies with refuge requirements, so it may be that insufficient refuge plantings contributed to the Iowa situation.

Smith identifies a further concern: “From some of the initial research on rootworm resistance to Bt corn, it appears as though the genes for resistance may not be recessive.”

If the resistance genes are dominant instead of recessive, then inheritance of those genes is more likely to occur.

Another factor pointing to the likelihood of rootworm resistance eventually occurring in corn fields is that researchers have already created resistance in the lab. “After just three rootworm generations, a group of researchers in Missouri was able to develop resistance to the Cry3Bb1 toxin in the lab/greenhouse environment,” says Krupke.

Furthermore, the corn rootworm seems to have a talent for developing resistance. Smith says, “Historically rootworms have been very good at becoming resistant to different control measures used against them. For instance, there are multiple insecticide groups that they became resistant to in the US where, year after year, growers used either soil or foliar insecticides to control the larvae or adults.”

There is also a rotation-resistant rootworm variant in some areas of the US Corn Belt. “In some of the states where they have a two-year rotation of corn and soybean, rootworm beetles will lay their eggs in soybean, resulting in problems in first-year corn,” explains Smith. “Dr. Art Schaafsma (from the University of Guelph) and I have been monitoring for that variant in Ontario for quite a few years. We think it may be here, but it is not yet at levels that would create an economic problem in Ontario.”

What growers can do
One of the main advantages for rootworm control in Ontario and many Corn Belt states is that corn-on-corn cropping is not as common as it is in Iowa. Smith emphasizes, “Crop rotation is still our best method to control corn rootworm in Ontario.”

Another key practice to slow development of resistance is to follow the Bt refuge requirements. Krupke says, “The Iowa situation underscores how important the refuge is. Something is going on in Iowa and we have anecdotal reports from other areas in the Midwest. There’s no reason why Bt resistance could not happen in other areas. Iowa is not so different in terms of growing practices and pest pressure, that the rest of the Corn Belt can just say, ‘It could only happen there.’”

Monsanto’s Lawton describes some recent developments that are making it easier for growers to comply with refuge requirements. “For the first-generation Bt technologies that have been available for a number of years, farmers are required to plant a 20 percent structured refuge - where the refuge is planted separately from the traited product. We now have next-generation Bt proteins for both above-ground insects and below-ground insects. When you combine the two in the same product, you have dual modes of action: two different proteins that work on the same bug in two different ways. That reduces the probability of resistance developing, allowing farmers to reduce their refuge from 20 percent to just five percent of their planted acres.”

Growers can also slow the development of resistance by varying their control methods. “That could include alternating the different Bt traits for rootworm, using stacked traits, or soil insecticides, and seed treatments may be effective when you have smaller populations of rootworm,” says Smith.

For Krupke, another other key message from the Iowa study for growers is “vigilance.” He explains, “The only reason we are even discussing the situation in Iowa is because corn growers were alert and they contacted members of industry and extension educators and eventually the word made its way to a scientist at Iowa State. With all the corn fields out there, we need producers to be watching their own fields. And when something is going on, they should not be afraid to follow up and ask questions and see if in fact they do have an issue.”

If Ontario corn growers see severe insect damage when scouting in a Bt field, Smith suggests they contact their seed company representative to confirm that the plants are expressing the desired trait, and let extension personnel from the Ontario Ministry of Agriculture, Food and Rural Affairs (OMAFRA) and the Canadian Corn Pest Coalition (www.cornpest.ca) know about the situation. 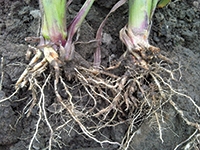 Severe injury by corn rootworm can cause lodging. In July 2011