Features Harvesting Soybeans
Rolling without stones: to roll soybeans or not to roll?

The pros and cons of land rolling non-stony soybean fields in Manitoba. 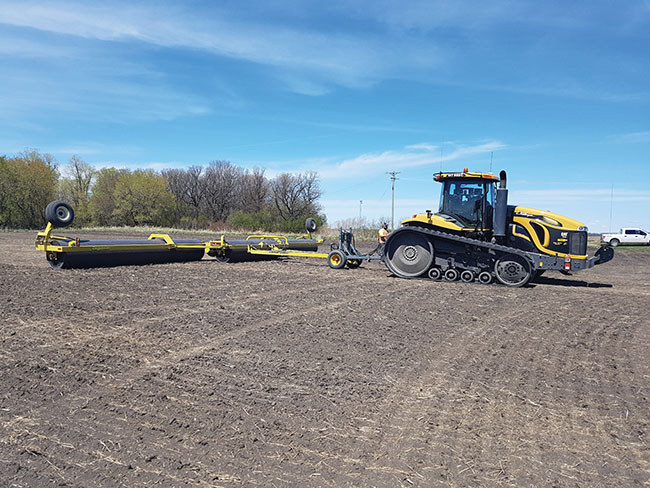 Land rolling has obvious benefits for managing stones in soybean fields. But should you roll a field that isn’t stony, where the risk of combine damage from stones is very small?

The Manitoba Pulse & Soybean Growers (MPSG) is hoping to answer that question through two complementary studies.

As growers know, land rolling pushes stones into the soil and flattens clods and crop residues, reducing the risk of costly damage to the combine header as it runs close to the ground to pick up the lowest soybean pods. By reducing this risk, rolling may allow faster combine speeds, may make conditions less stressful for the combine operator, and may reduce earth tag in the harvested grain. Also, rolling may improve the seedbed in some situations.

However, rolling also heightens the risk of wind erosion, increasing the potential for dust storms, topsoil loss, soil nutrient loss, and abrasion of crop plants by wind-blown particles. Rolling after the soybean crop has emerged can damage some of the plants. And rolling adds another cost to soybean production and takes up time during the busy spring season.

“Land rolling of soybean fields is a pretty common practice in Manitoba. Many fields have lots of stones that farmers are worried about because of the risk to equipment at harvest time, especially with the low soybean pod height. But we also see that soybean growers like to roll whether or not they have stones,” says Cassandra Tkachuk, an MPSG production specialist.

MPSG’s current recommendations on land rolling are in line with findings from the University of Minnesota, which has done a lot of land-rolling research.

“We recommend that you only consider rolling your field if stones or corn root balls are present, because they can pose a risk to equipment,” Tkachuk says.

“We recommend that you only consider rolling your field if stones or corn root balls are present, because they can pose a risk to equipment,” Tkachuk says.

“Most Manitoba soybean growers roll right after planting, before the crop has emerged, but extension messaging from Minnesota indicates this timing has the greatest soil erosion risk. So if you need to roll, we recommend that you do it either before planting or at the first trifoliate stage, V1. With V1 timing, your crop should be in the clear of the hypocotyl arch stage, which is most prone to breaking, and also of the third trifoliate stage, V3, where the plants are again prone to breakage. Post-emergent rolling should be done during the heat of the day when the plants are limp and less likely to be injured.

“We also recommend that you avoid rolling in windy weather because you are pulverizing the soil at the soil surface, increasing the risk of topsoil loss.”

Tkachuk notes, “The two Manitoba studies are building on the Minnesota research, looking at some of the gaps in knowledge, and adding a Manitoba twist.”

Both studies involve on-farm trials conducted in 2018 and 2019. One study, led by Lorne Grieger with the Prairie Agricultural Machinery Institute (PAMI), is focusing on the economics of land rolling. The other study, led by David Lobb from the University of Manitoba, is examining the wind erosion aspects.

“Both parts of this work – what is your erosion risk, what is the cost of rolling – are things that can help farmers in their decisions about whether or not to roll,” Tkachuk says.

“Both parts of this work – what is your erosion risk, what is the cost of rolling – are things that can help farmers in their decisions about whether or not to roll,” Tkachuk says.

MPSG is coordinating the trials through its On-Farm Network, including helping with trial establishment and harvesting to collect yield data.

The field sites for both studies are in the Red River Valley because much of this region has non-stony soils. Lobb explains, “The Red River Clays, which are the vast majority of the clays in the Red River Valley, have almost no stones. They are clays from the old lakebed [of glacial Lake Agassiz] except for the occasional stone dropped from icebergs floating in the lake 10,000 years ago. But these occasional stones can sometimes be the size of cars.” So the risk of stone damage in fields with these soils is small but not zero. 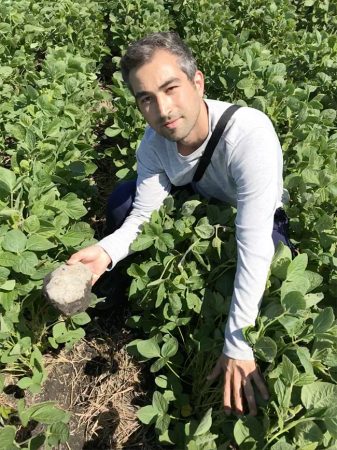 Costs and benefits of rolling

“With our study, we want to give producers who don’t have stony fields some data so they have better information to help them decide whether or not they can skip rolling,” explains Charley Sprenger, the project leader for the PAMI study.

“Their time is very valuable in the spring when they’re trying to get everything seeded, and rolling is one more pass on the field. So we want to determine the true cost of rolling and the economic returns provided by rolling non-stony fields. We want to see if they can skip rolling without sacrificing crop quality and yields, and without affecting harvestability of the field.”

That year, they evaluated the rolling operations at three sites (East Selkirk, Elm Creek and Dencross). They measured things like fuel consumption, draft load, seed-to-soil contact, and seeding depth. And they calculated rental/ownership costs based on the type of rolling equipment and work rate. Agriculture and Agri-Food Canada assessed surface roughness at the sites.

PAMI’s Year 1 report highlights some interesting preliminary results. For instance, the fuel consumption used in rolling ranged from 0.36 to 0.50 litres per acre for a 36-inch roller pulled by a 200-horsepower and 450-horsepower tractor, respectively. The average cost of rolling was $3.53/acre, based on ownership/rental costs for a roller being about $74/hour.

In Year 1, combine header losses showed no clear trends: at one site, the rolled plots had lower losses; at another site, the non-rolled plots had lower losses; and at the third site, there was no significant difference between the two treatments. As well, there was no significant difference between the treatments at each site in terms of the average combine operating speed and the combine operators’ experiences with handling the equipment.

“From the harvest data last year, it was pretty inconclusive whether rolling had any effects on harvesting in non-stony fields,” says Sprenger.

“From the harvest data last year, it was pretty inconclusive whether rolling had any effects on harvesting in non-stony fields,” says Sprenger.

“This suggests that whether or not you roll a non-stony soybean field comes down to producer preference. A lot of times, rolling provides reassurance that you might be able to drive a little quicker because you are not worried about having the one stone in the field go through the combine.”

In Year 2, the PAMI team collected rolling data at Elie, Brunkild, and Sperling. They hope to get back to all three sites for harvest measurements despite the poor fall weather. Those planned harvest measurements include a site with post-emergent rolling (rolled in late V2) so they may be able to get some data on this type of rolling.

Also in Year 2, PAMI asked the producers to try some ‘gear up, throttle down’ strategies during rolling. Sprenger says, “We noticed in Year 1 that fuel consumption during rolling was fairly high or they were using power units that were larger than required. If producers decide to roll, we want to find strategies that will reduce their power consumption.” 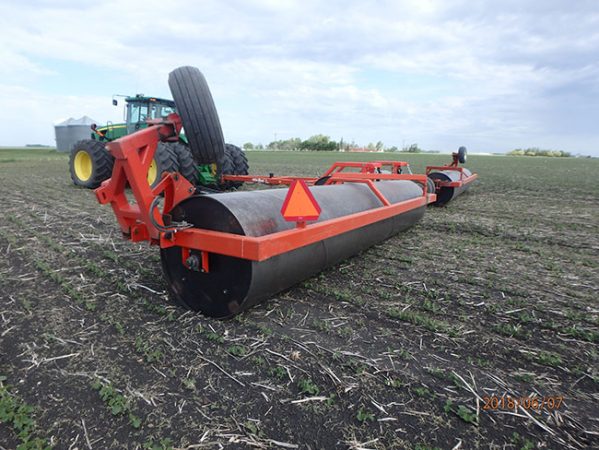 Post-emergent rolling at the first trifoliate stage is another option for soybean growers.

“In the Red River Valley, and across the Prairies, in the winter we often see what we call snirt [dirt on snow], which is one key sign of wind erosion, and in the spring we sometimes get dust storms,” says Lobb, an expert in soil erosion. “Soybeans have a greater risk of wind erosion because of the lack of crop residue. MPSG was concerned that farmers who roll their soybean fields are increasing their risk of wind erosion and therefore exacerbating what is perceived to be a major problem.”

Lobb explains why land rolling increases the wind erosion risk: “Surface roughness is one of the biggest factors affecting wind erosion. All of the little pockets on a rough surface trap material, so the soil doesn’t really start to blow, and if it does start to blow a little bit, the sediments [eroded soil particles] get stuck in the little pockets. So if you smooth the surface, the sediment can move along the surface and contribute to significant wind erosion events, that is dust storms.”

In Year 1 of this study, Lobb and his study team had four sites, which were located across the Red River Valley at Morris, Elm Creek, Dencross and Randolf. It turned out that only two sites had the non-stony Red River Clays.

The other two sites had Scanterbury Clays, which are gravelly or stony in some places. One site in particular was quite stony. Lobb says, “If I were a farmer who had the stony conditions in that field, I would be rolling my land too, regardless of the wind erosion risk. Stones going through the combine could represent days of delay during harvest and thousands of dollars to repair the damage. If you weigh that against the potential increase in wind erosion risk, you are going to worry about the stones going through your combine.”

In Year 2, the study had four sites that were all on fairly similar, non-stony soils southwest of Winnipeg. Two sites were near Brunkild and two were near Starbuck.

Lobb’s graduate student Ehsan Zarrinabadi is running this study. At each site in 2018 and 2019, the study team compared two treatments: 1) pre-emergent rolling; and 2) non-rolled.

The study team assessed the effects of land rolling on the potential for wind erosion, measuring characteristics like surface roughness, stoniness, surface and root zone moisture content, and crop residue cover. They also trapped the eroded sediments from each treatment and analyzed the properties of these sediments such as nutrient levels and particle sizes. In addition, they surveyed nearby roadside ditches for wind-eroded sediment.

As well, the team assessed crop growth and yield. That work included measuring the amount of abrasion of soybean plants caused by wind-eroded particles. Such abrasion can result in increased crop disease and poorer crop growth.

In spring 2018, two severe wind erosion events occurred in the Red River Valley, but they happened before soybean seeding and land rolling. So land rolling did not affect these events. The soil loss impacts of these events were captured through the ditch survey.

The Year 1 results didn’t show any significant differences between the rolled and non-rolled treatments in terms of things like plant abrasion and crop yield. Also, there was too much variability in the amount of wind-eroded sediments to say if the rolled treatments had more erosion than the non-rolled. Lobb notes, “Keep in mind that this is a very limited data set. For Year 1, there were only five plots within two treatments at each of four sites.”

So in Year 1, there wasn’t a big difference between the rolled and non-rolled treatments. If these initial results hold true for Year 2, it will be good news for growers who want to roll fields where the risk of stone damage is minimal.

Over the coming months, the PAMI team and the University of Manitoba team will be completing their analysis and reporting on their MPSG land rolling studies. The new information from these studies on the costs of the rolling operation and how to reduce those costs, and on the effects of land rolling on soil loss, crop yields and harvestability will help growers with non-stony fields in making their decisions about whether or not to roll.

1 Comment » for Rolling without stones: to roll soybeans or not to roll?