According to dealership service departments, repairs can cost more than $50,000 for putting one fist-sized rock through the pickup of a new combine, plus some inconvenience. Generally, it’s worth the trouble to avoid that kind of problem. Until soybeans came along as a major crop, however, the province had very few acres that required putting the header into that on-the-ground high-risk zone.

The rolling option
Preparation is key, and Lange suggests finding a land roller to use in advance of planting. “Sometimes there’s an accessibility issue. Not every farmer owns a roller. But some companies do rent rollers out to growers,” he notes.

Lange tells first-time soybean growers to plan to roll after seeding and before the plants emerge. The rolling could be done within a day or two of seeding, depending on how wet the soil is. You don’t want to roll if the soil is too wet due to compaction issues.

“Unless the soil is really dry, you want to give it time to firm up a little. When you’re planting into moisture, you also are working up a little wet soil to the surface,” he says.

Sometimes he fields questions about roller weight and roller speed. Mostly, he isn’t concerned. “Weight isn’t an issue. Most rollers don’t have the option to add weight with water. If you do have an option to put pressure on the roller, you only want enough pressure to anchor the stones in the ground, fist-sized and smaller. If those are anchored, they won’t be picked up by the header.

“Those that are fist-sized probably cause the most damage. If you don’t get those pushed into the ground, the pickup reel and header probably will pick them up with material you’re taking into the combine. It’s a lot more difficult for a combine to pick up the real big stones.”

Should every acre be rolled every year? Lange says, “A lot of growers do roll every year. Where you may not want to roll is where you’re confident the stones are very limited, and where soil compaction could be an issue.

A second situation arises for some growers, some years, causing them to back off. “Suppose you seed 200,000 plants. A month later, you find that you had some issues and you’re down to 80,000 plants per acre, the lower limit for a soybean crop. Rolling at that time might reduce your plant stand even more, and that becomes an issue. You might argue, ‘I’ll take what I’ve got now in the field rather than reduce my plant stand density even more,’” Lange says.

Situations just like that occurred in 2015. Some growers planted in early May while the soil was relatively cool, but delayed rolling. It stayed cool, and a month went by before they saw green hooks poking above the field surface. At that point, it was good to review why they were rolling.

Why roll soybeans?
Unlike most field operations, growers are not rolling to increase yield. They roll to make the harvest easier and less risky. “Rolling fields after seeding is a way of pushing stones into the soil and anchoring them firmly so the combine header doesn’t pick them up,” Lange says. “Growers who may have just the odd stone in a field still like rolling so they have a nice flat surface for the combine header to go along at harvest time, to get more beans. That way, the header rides really smoothly on that flat surface. There’s no dirt lumps. If everything is nice and flat it allows you to get a few more beans into the hopper.”

Those growers, who don’t have stone issues but still roll the field to create the best possible opportunity for catching bean pods, may get a bit more yield as a secondary benefit.

Growers have two windows for rolling a soybean field: immediately after seeding, and a period generally around the first trifoliate stage.

“Most growers try to roll after seeding. That’s the ideal time, perfect for rolling. Within a day of seeding, once the ground firms up a bit, a lot of growers will go in and roll the field. If you can roll then, that’s the best time to do it.”

After seeding, the ground could be too wet for a roller. And rolling could lead to some compaction issues, especially on clay. Or, after seeding, an inch of rain could bless the field but delay the rolling plan.

“Once the beans are out of the ground, the first trifoliate is the target stage that I shoot for,” Lange says. “However, if all the beans are past the hook stage and you’re at the first unifoliate, you can probably roll then. But, you have to roll on a warm day because those plants need to be pliable when the roller rolls over them.”

In practice, it may take two weeks for the beans to come out of the ground and reach the unifoliate stage. From then, you’re looking at seven to 10 days between stages, depending on growing conditions.

Unless you run into wet weather, try to finish rolling before beans are hitting the second trifoliate.

Timing issues
“If you try rolling when beans are in the hook stage, starting to pop through the ground, you can damage the hypocotyl and break stems. That could lead to a reduced plant population,” Lange warns.

Instead, in the first trifoliate, roll the soybeans on a nice warm day. They’ll recover and the stones will be pushed into
the soil.

“Plants take a while to warm up in the morning. Even though the temperature is warm, you’re better off rolling in the afternoon. That’s going to work a lot better for you. The plant is more pliable when it’s warm,” he says.

Once you do start rolling the new soybean crop, check for damage. “I usually recommend making a pass down the field for 300 or 400 feet, then have a look. See if you’re breaking off any plants. If you’re not breaking plants, you’re doing well.

“If you are breaking plants, assess why. Is it warm enough? Are the plants too big to roll? Are you rolling to get a few dirt lumps or are you rolling for stones? If you are rolling stones, there is almost no choice but to roll. If you’re rolling dirt lumps and breaking stems, you may decide it’s OK to miss rolling this year. You can still harvest nearly all the beans.” 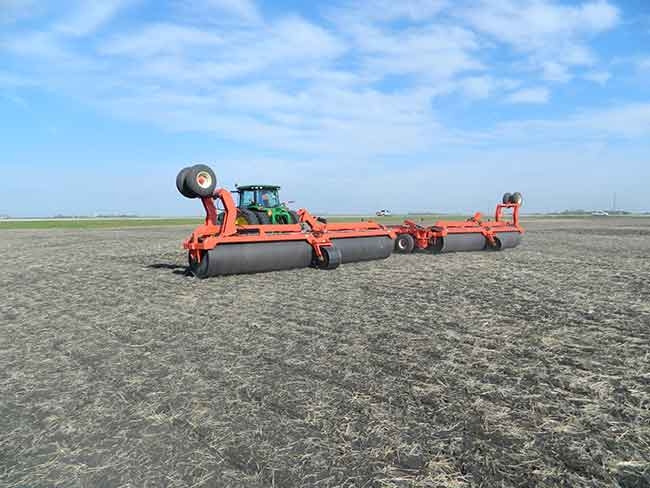 Rolling soybeans can be done within a day or two after seeding. Cost of repairs is one good reason to roll your soybean field next season