Seeking a solution to soybean header losses by raising the height of the lowest pods. 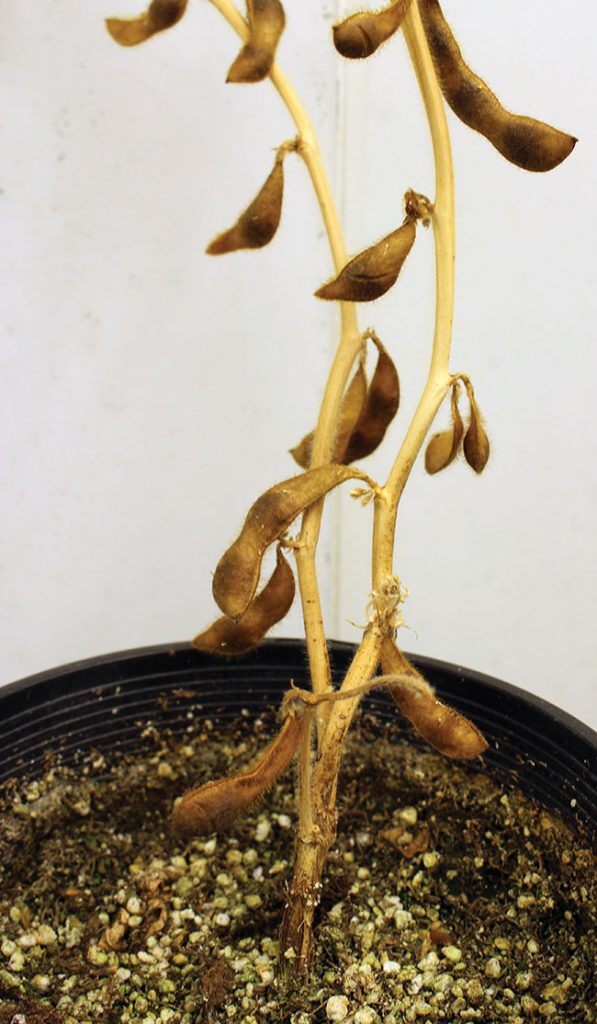 To reduce stubble loss, a Manitoba study is testing PGRs as a way to increase the height of the lowest pods on soybean plants. Photo courtesy of Belay Ayele.

Stubble loss – where the lowest pods on soybean plants remain attached to the stubble after harvest – can be a costly and frustrating yield loss problem. And it’s a problem that is a particular concern with the soybean varieties grown on the Prairies. So a Manitoba research project is determining whether plant growth regulators (PGRs) might offer an effective way to increase pod height.

“Some studies in North America estimate that up to about 20 per cent harvest losses can occur in soybean fields. About 80 to 85 per cent of those harvest losses occur at the header. And one of the main header losses is caused by low pod height. Very low pods cannot be captured by the cutter bar, so those pods usually remain on the cut stubble,” explains Belay Ayele, an associate professor at the University of Manitoba, who is leading this project.

Cassandra Tkachuk, a production specialist with the Manitoba Pulse and Soybean Growers (MPSG), says, “We get questions every year about low soybean pods and what causes the problem and how it can be avoided. Setting the cutter bar low enough to capture really low pods can result in mechanical damage to the equipment from taking in soil and rocks. So growers are looking for other ways to deal with this issue.”

She notes, “With the really dry spring in parts of Manitoba this year, I was hearing some early reports of low pods and worries for the upcoming harvest. But then I also heard reports of high pods.” That prompted Tkachuk to review the findings from many different soybean studies to see what has been learned about the impacts of genetics, environment and management on pod height. These studies include Manitoba research like a 2016 MPSG study comparing pod height across the varieties grown at two soybean variety trial sites in Manitoba and Tkachuk’s master’s research on the effects of plant population and planting date on pod height.

“From what I can tell, there’s not a lot a grower can do in terms of crop management. Pod height is not influenced by factors like planting date, plant population, row spacing [and tillage],” she summarizes.

“Pod height is not influenced by factors like planting date, plant population, row spacing [and tillage].”

“Genetics does play a role in pod height. For instance, we saw some differences between the varieties at the variety trial sites. However, the genetic expression of pod height seems to be influenced by the environment because the varieties behaved differently depending on the site.

“And in terms of environmental effects, there are a lot of unknowns.” For instance, limited information indicates that cool weather during early growth may reduce pod height, but hot temperatures have been shown to reduce height too. Similarly, the effect of moisture is not clear, although some evidence suggests that moisture extremes, either very dry or very wet conditions, might reduce pod height.

“The long-term solution to stubble loss is to breed new soybean varieties that have both early maturity and higher pod heights, so they set their first pods high enough to avoid stubble losses. But breeding new varieties takes time,” Ayele says.

“While we are waiting for new cultivars with both those traits, we can apply some short-term strategies. One strategy is to carefully adjust combine settings, but combine adjustments can only go so far. The strategy that I am looking at is to increase the height of the lowest pods by using PGRs.”

“One strategy is to carefully adjust combine settings, but combine adjustments can only go so far. The strategy that I am looking at is to increase the height of the lowest pods by using PGRs.” 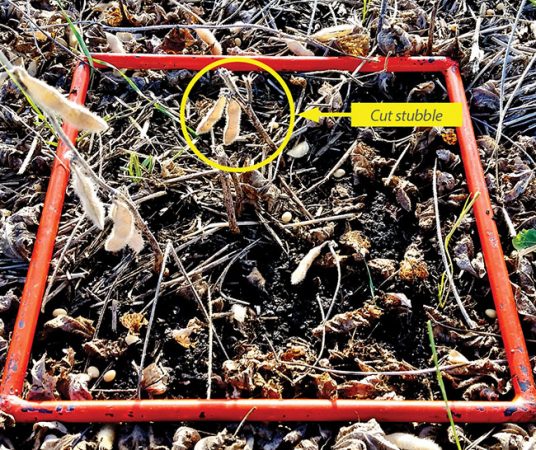 Stubble loss, when pods remain on the cut stubble, is one of four types of header losses in soybean crops. Photo courtesy of Belay Ayele.

Ayele explains that PGRs are synthetic compounds that mimic the function of plant-produced hormones. “Every plant produces plant hormones, but some crop varieties produce more and some produce less. Usually these plant compounds play important roles in regulating a wide range of plant growth and development processes including plant architecture characteristics, such as plant height or podding height,” he says.

However, a plant with an excess of these compounds may have problems with lodging and other negative impacts on its growth and development, and may not mature within the short Prairie growing season.

So Ayele and his research group want to increase the length of the stem only up to the first node.

They are testing a number of PGRs on different soybean varieties with a wide range of pod heights. Working under controlled environment conditions, they have identified promising PGRs and optimized the concentrations of these PGRs. They are currently fine-tuning the applications of these PGRs to make them more efficient and effective.

Their preliminary results show that their approach could work: a PGR seed treatment can increase the height of the plant’s first node without affecting the lengths of the subsequent internodes.

Their preliminary results show that their approach could work: a PGR seed treatment can increase the height of the plant’s first node without affecting the lengths of the subsequent internodes.

Once Ayele’s group has optimized the most promising PGR treatments under controlled conditions, they will test the treatments in the field.

Ayele notes that PGRs are not yet registered for this use in Canada. “We have been in discussion with some companies about the project. Hopefully, if they see promising results from our research, they would be open to pursuing registration.”

This project is jointly funded by MPSG and Ag Action Manitoba, a Canadian Agricultural Partnership program. Tkachuk says, “I think Dr. Ayele’s work on PGRs to increase pod height is another management factor that we definitely need to explore, to see whether PGRs might be something that could work for farmers.”

Tips for now, and looking ahead

At present, the main thing that growers can do about stubble loss is to take steps to reduce their overall header losses at harvest. Tkachuk offers a few tips.

“First and foremost, we recommend direct combining using a flex header – something that can hug a little closer to the contours of the ground.”

MPSG also advises keeping combine speeds below five miles per hour (mph). “Prairie Agricultural Machinery Institute (PAMI) has looked at the effects of harvest speed on header losses. [In a 2016 field trial using an auger header,] they found similar losses between two, three and four mph, but the losses increased at five mph,” she explains.

“[PAMI] found that the use of an air reel, which is an attachment you can put on the header, reduced harvest losses with both types of headers.”

The Harvest Loss tool makes it easier to assess header losses during combining. Ideally, growers would check their losses whenever their field or crop conditions change. Tkachuk says, “We know harvesting can be ‘go’ time; you don’t want to stop the combine to do seed counts. But knowing what kind of losses you’re having at the time of harvest can help you adjust your combine settings more precisely, or maybe decide to slow the combine down a bit more, and just understand how much yield loss you are incurring at harvest.”

Looking ahead, Tkachuk says, “Stay tuned for the results from Dr. Ayele’s PGR work. I’m also hoping other researchers might be interested in looking at the environmental effects on pod height to get a better understanding of that issue.” And of course, soybean breeding to increase the height of the bottom pods in Prairie varieties continues to be an important goal.