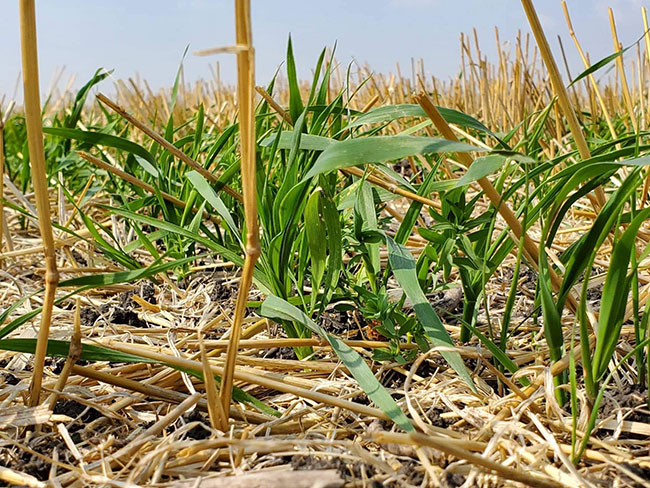 ABOVE: A cover crop of oats, canaryseed and flax in Rosenfeld, Man. Improved soil health was seen as the most frequent benefit by 54 per cent of farmers. PHOTO COURTESY OF CALLUM MORRISON.

To start the voluntary survey, social media was the initial method to contact farmers, and in the end, a good part of the survey came from farmers through social media contacts like Facebook. We also connected to agricultural organizations across the Prairies, and were in more than 80 media publications promoting the survey.

One of the things that had to be decided at the start was how to define what cover crops are. There is a lot of innovation with forages, intercropping, and integrated crop and livestock systems. For the purposes of the survey, we defined it as any non-cash crops that were grown, and did include cover crops that were going to be grazed, green manures, and full season annual forages.

The shortness of the growing season is one of the driving factors in how farmers are doing things differently here. Another part of the challenge on the Prairies for cover crops is the environment, with periods of dryness in the fall making establishment difficult.

The survey results show the diversity of approaches from the early adopters of cover cropping, and some clear trends. The number of farmers responding was roughly one-third in each Province. Farmers were growing cover crops throughout most of the Prairies from Grande Prairie to the Red River Valley. This is an important message for agronomists and farmers to hear – that cover crops are grown in many different areas. 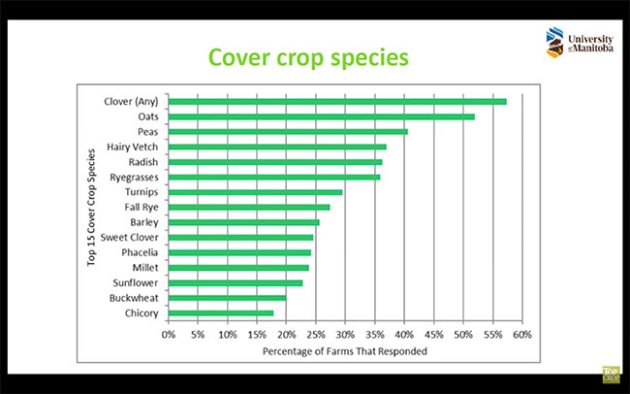 One of the interesting findings was the importance of intercropping for Prairies farmers growing cover crops. A large proportion of farms are establishing their cover crops as an intercrop either at the same time as their cash crop (37 per cent) or by broadcasting their cover crop into their cash crop at some point during the growing season before harvest (14 per cent). It appears that some farmers are using intercropping as a way to get around the short growing season or dryness after harvest.

For termination, farmers are using species that will winter kill (37 per cent). Grazing to terminate cover crops (46 per cent) was also popular. As farmers get more experience, there may more overwintering cover crops that require termination with tillage or herbicides.

Ninety-one per cent of farmers said they saw at least one benefit from cover crops. The most common was improved soil health. They also said they saw increased biodiversity and organic matter, and less erosion. Some of these benefits increase over time, and others might be seen relatively quickly. 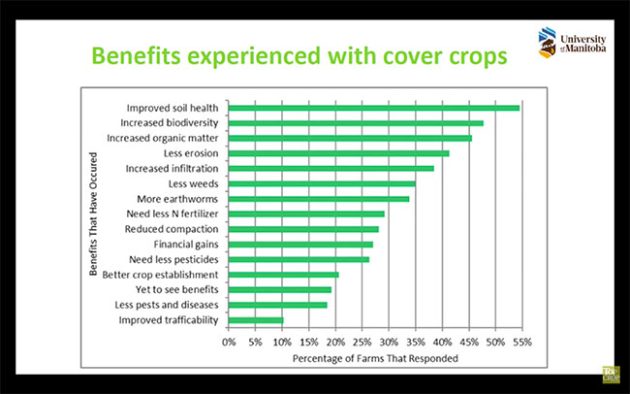 Along with these benefits are real challenges. It is important for farmers to know those challenges, and also for policy makers to understand those as well. The most common challenge was the shortness of the growing season, experienced by 30 per cent of farmers.

Low moisture in the fall was also a challenge for 27 per cent of farmers. The additional costs of growing cover crops (25 per cent) and the impact of cover crop on herbicide choice (21 per cent) were also common problems identified by respondents. It appears these challenges are not insurmountable, and by identifying them, farmers can proactively innovate their way out of those challenges. But it also allows researchers and extension the opportunity to see where research needs to be targeted.

Top 15 problems experienced when growing cover crops
Cover crops are at a very early stage of adoption, and there are a few things that would encourage it. The survey found that top two practices to encourage farmers to grow cover crops were payments for storing carbon (59 per cent) and tax credits for planting cover crops (55 per cent). The implementation of these practices will be complex, but that is where farmers are looking to help cover some of the additional costs of cover crops. 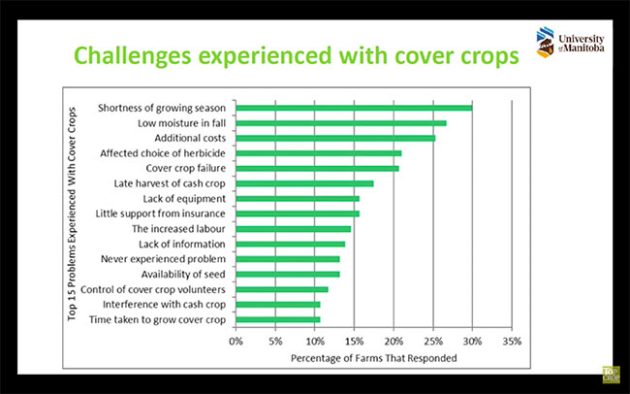 Measures that would enable cover crop use
Other things that can be down to encourage the adoption is investing in research in local regions. Having information that is local would really help farmers. Also, providing technical assistance, access to information and extension, and economic and scientific data to support adoption were also measures mentioned to enable cover crop use. 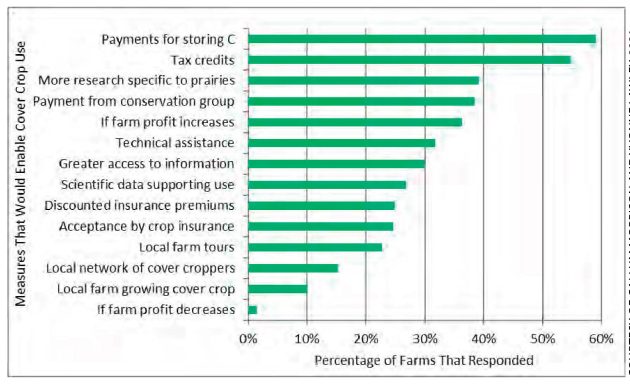 The future of cover crops will be driven by farmers and their connections with each other. Ideas for innovation, how to adapt practices, and how to make it practical for Prairie farmers will help move the adoption of cover crops from the initial stages of early innovation to more wide-spread adoption.