Wheat growers now have great comparative data about which cultivars have the best resistance to the leaf spot complex and common root rot in Saskatchewan’s Brown soil zone. The data come from side-by-side trials at Swift Current to evaluate the disease responses of diverse cultivars of common wheat, durum, spelt and the khorasan wheat Kamut.

Although the study took place under organic conditions, the results are also useful for conventional and low-input production systems. No matter how wheat is grown, resistant cultivars are an important tool for dealing with these widespread and damaging diseases.

“I was interested in this research because of a gap in [disease resistance] information under organic and conventional systems, and because of an interest in assessing disease under organic conditions,” plant pathologist Myriam Fernandez — who led the three-year study — says.

“This study was the first of its kind in North America to provide information on disease resistance and susceptibility in wheat cultivars under organic production. Most organic research on these diseases has been done in Europe on winter wheat,” Fernandez, who works with Agriculture and Agri-Food Canada (AAFC) at the Semiarid Prairie Agriculture Research Centre, notes.

However, even for conventional wheat production on the Prairies, such side-by-side varietal comparison data for these two diseases are not widely available. Fernandez explains, “We update the leaf spot ratings for wheat cultivars in Saskatchewan’s Varieties of Grain Crops publication every year. People who use that publication may think we grow all those cultivars together in the same field and the same year to assess relative reactions to these diseases, but there is no funding or other resources to do that. The data come from different years and different environments [so they are not as accurate as data from side-by-side comparisons]. We used to also provide common root rot ratings for that publication, but I had to stop this testing [some years ago due to lack of funding].”

Varietal information on disease resistance is especially helpful for wheat growers who are looking for alternatives to chemical control of these fungal diseases. “Organic growers can’t use chemicals to control these diseases, and people who practice low-input agriculture would likely be reluctant to use chemical controls,” Fernandez notes.

“In conventional agriculture, it is relatively easy to control leaf spots with foliar fungicides, but chemical control of common root rot is not as easy,” Fernandez says. “A fungicidal seed treatment will protect the crop mostly from seedling blight, so it will help infected kernels to germinate, emerge and survive the first stages of growth. But root rot develops later on, and a seed treatment’s effect is not carried forward to later stages of plant growth.”

As a result, both conventional and organic growers have to rely on resistant cultivars and changes in agronomic practices, like crop rotation, to control common root rot.

Yield and quality impacts
Fernandez explains that the leaf spot complex and common root rot can each have serious impacts on wheat yield and quality.

“The leaf spot complex is one of the most widespread wheat diseases on the Prairies and across Canada. It is called a ‘complex’ because several pathogens are responsible for it including: tan spot caused by Pyrenophora tritici-repentis; septoria leaf blotch complex caused by Phaeosphaeria nodorum, Mycosphaerella graminicola and Phaeosphaeria avenaria; and spot blotch caused by Cochliobolus sativus,” she says.

“Leaf spots can have a significant impact on yield when the flag leaf is moderately to severely infected. In addition, most of the pathogens that cause leaf spots can also infect the heads and kernels, causing problems like black-point and red smudge.

“For example, the pathogen that causes tan spot also causes red smudge, which is mostly a problem in durum. This pinkish discolouration of the kernels can cause serious economic losses because the tolerance for red smudge is very low in the top grades of durum, even though no harmful toxin is involved. Durum with 0.3 per cent red smudge is downgraded from No. 1 to No. 2.”

Common root rot and crown rot are found in most fields and most environments on the Prairies, where they are caused mainly by Cochliobolus sativus and various Fusarium species.

“Common root rot can cause a variety of problems in wheat,” Fernandez notes. “An infection at the seedling stage can cause seedling death and lack of germination and emergence, resulting in lower yields. In addition, a lot of the same Fusarium species that cause root and crown rot also cause Fusarium head blight [FHB]. In a dry year, they might not cause [FHB] but they can cause root rot and crown rot, likely at a higher level because of heat stress. So those pathogens infecting the roots and crowns will be there in the field as a reservoir, ready to cause [FHB] if wet conditions occur.”

In Saskatchewan, the main Fusarium pathogen causing FHB has been Fusarium avenaceum. This fungal species produces mycotoxins, although not deoxynivalenol (DON), which is produced by Fusarium graminearum, the predominant cause of FHB in most other regions.

Fusarium avenaceum is not only a problem in wheat. “This pathogen affects many other crops, including pulses, especially peas and also lentils, and oilseeds like canola and flax,” Fernandez says. “For example, when people practice a rotation of durum – which is more susceptible to Fusarium than common wheat – with peas, lentils or chickpeas, they increase the inoculum of Fusarium avenaceum in the field and then increase the chances of having FHB caused by this pathogen.”

According to Fernandez, Cochliobolus sativus appears to be increasing on the Prairies and in other regions of the world. She notes, “It causes root rot, crown rot, spot blotch on leaves and black-point, so it can infect the whole plant. It can also infect other crops, so crop rotation might not help to get rid of it; in fact, a rotation that also includes barley will cause the situation to get worse because barley is more susceptible than wheat to that pathogen.”

Common root rot can be more of a problem than the leaf spot complex. Not only is it harder to control with fungicides, but growers don’t always recognize that this disease is present in their wheat crop. Fernandez says, “People see the above-ground symptoms but they don’t necessarily realize [that the cause lies below-ground].”

Resistance results
Fernandez and her colleagues conducted the study from 2010 to 2012. It was funded by the former Canadian Wheat Board under its Organic Market Sector Development Initiative.

As expected, there were differences in leaf spot resistance among the different species and cultivars. “Overall, for all cultivars, leaf spot severity was highest in 2010 and lowest in 2012. No cultivar had a consistently low level of leaf spot infection across all years,” Fernandez notes.

She summarizes the varietal results averaged over the three years. “For common wheat, the varieties most susceptible to leaf spot were AC Barrie, CDC Go, Superb and Unity. The ones with the lowest infection levels were AC Andrew, CDC Bounty and Lillian.”

Kyle was the most susceptible durum cultivar; there were no significant differences among the rest of the durum cultivars. Kamut’s response to leaf spot was similar to that for the common and durum wheats.

Again as expected, the study found differences in common root rot resistance among the wheat species and cultivars. She notes, “We already knew that durum wheat was more susceptible than common wheat to root rot, but we didn’t have any information on spelt wheat or Kamut. We found that spelt was the most susceptible to root rot, followed by durum wheat and Kamut, with common wheat having the lowest average severity.”

The root rot results varied quite a bit from year to year. In spelt, CDC Origin had greater root rot severity than CDC Zorba. On average, among the durum cultivars, AC Avonlea, Kyle and Transcend had the highest severity and CDC Verona had the lowest. For common wheat, AC Elsa, CDC Kernen and Red Fife tended to be the most susceptible, and Superb and Unity tended to be the least susceptible.

The study’s results can help organic and conventional wheat growers in the Brown soil zone of southwest Saskatchewan when deciding which cultivars to grow. The weather in the region during the study was wetter than the long-term average, so the results apply best to such conditions.

Because of those wetter conditions, the results may also have some application to the moister parts of the Prairies. “You could possibly extrapolate the study results to other areas, but you would have to be careful because there could be different relative prevalence of the wheat pathogens in other environments and other soil types,” Fernandez says.

Fernandez recently published two papers on this study in the Canadian Journal of Plant Sciences (available online, open access). If funds and other needed resources become available, she would like to continue this research on varietal resistance to these two diseases to build a dataset that covers a wider range of environmental conditions and soil types. 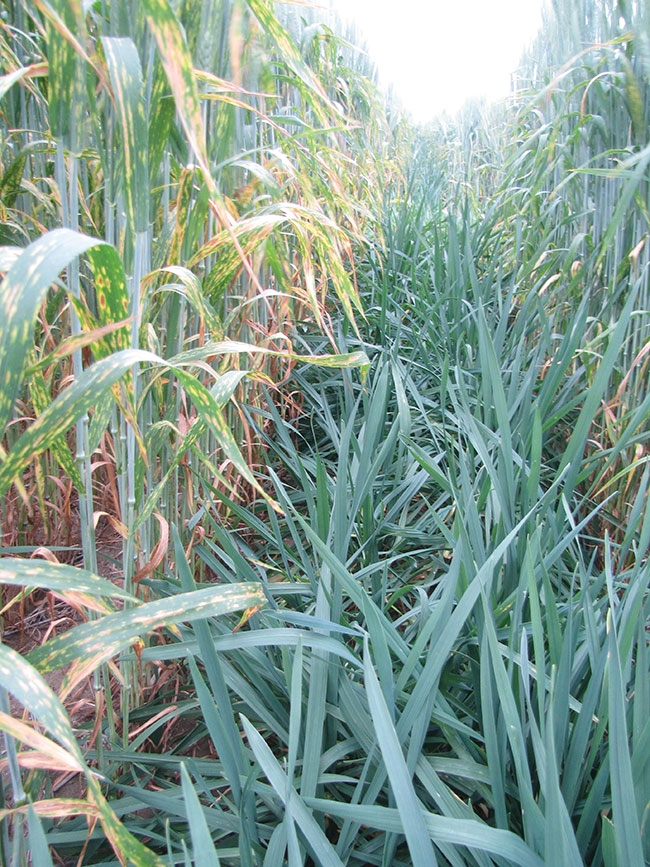