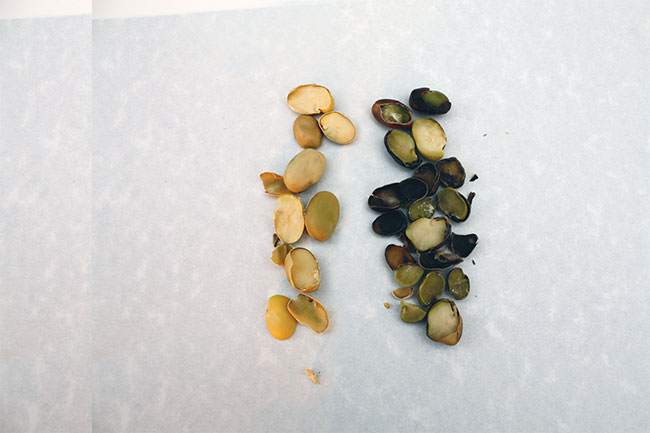 “At first we thought the differences in frost damage could have been because of differences in maturity. Maturity had a little bit to do with it, but it turned out that tannin-type varieties had way less damage than the zero-tannin varieties,” says Henriquez, a senior pulse crops technologist with AAF in Edmonton.

The two experiments were set up to evaluate the adaptability of non-registered European varieties in Alberta and the agronomic performance of newly registered varieties in Alberta. The frost event hit three sites in central Alberta, lasting 13 hours with temperatures dropping to -3 C in Morinville, -5.2 C in Barrhead and -6.5 C in Vegreville. 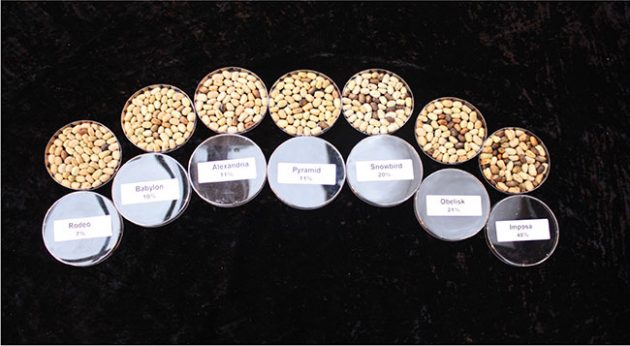 Distribution of frost damage in Experiment 1 and Experiment 2 in central Alberta
“I looked through the scientific literature and found a couple papers in Cryobiology [journal] that linked tannins to frost resistance, but the effects of tannins in preventing frost damage haven’t been studied very much,” Henriquez says.

Henriquez says the papers indicated that a possible mechanism explaining the role of tannins in frost protection is their activity as a supercooling promoting agent or anti-ice nucleating agent (anti-INA), which prevents intracellular ice formation and subsequent damage.

Although the frost event did cause damage to the seed, the average yield from frost-damaged varieties was similar to the other years in Experiment 1 when frost did not occur. Henriquez says the varieties were close enough to maturity that yield was not affected. Other research has found yields are not affected by frost when 30 per cent of the plants had the lowest pods turn black. However, he did observe that as the level of frost increased, the yield of affected varieties decreased, and this occurred more with the zero-tannin varieties. 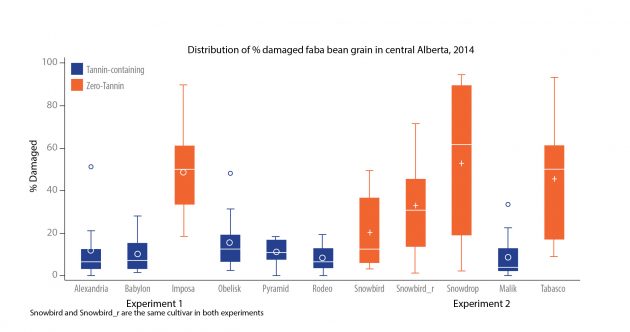 Henriquez says that further research on understanding how tannins help to reduce frost damage could assist plant breeders in selecting for this trait. If combined with earlier maturity, the selection for tannin-containing varieties that are more resistant to frost could reduce the risk of commercial downgrading. In the end, greater frost resistance could help improve marketability to the human and livestock markets.