In high yielding cereal crops, lodging is a common cause of yield loss. Under the right conditions, plant growth regulators (PGRs) can reduce plant height and reduce lodging. Plant growth regulators are synthetic compounds that can beneficially modify plant growth and development. Research continues to help address the many questions around PGRs, including responsive cultivars, appropriate timing, optimal conditions and other factors. 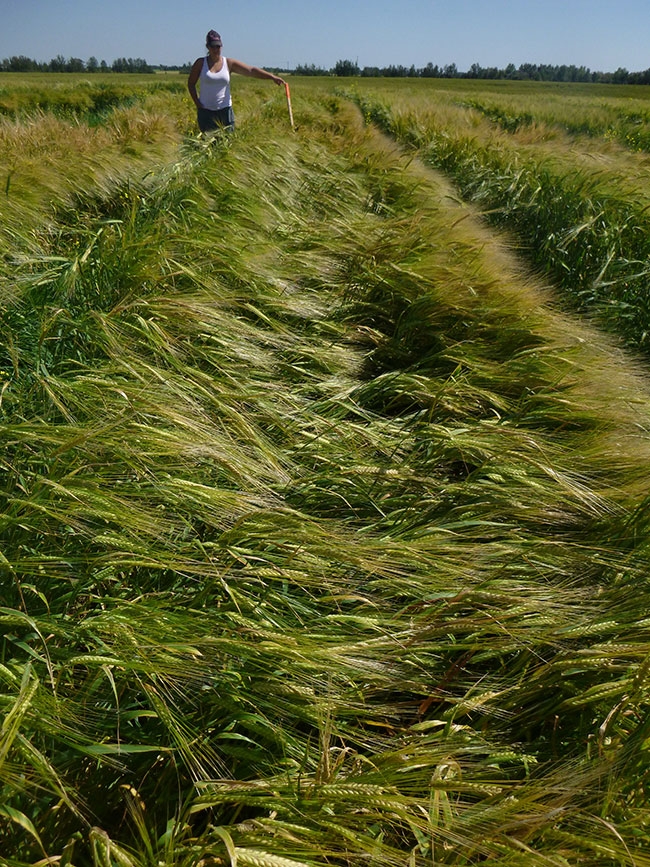 “We have been working on PGRs in overlapping projects for the past four years in all of the cereals,” says Linda Hall, professor and research scientist with the department of agricultural, food & nutritional science at the University of Alberta. “We have consolidated what we’ve learned in these different projects and are using this baseline data in a three-year project to get a better understanding of the potential scope of PGRs, cultivar specificity and appropriate timing. We are building on the combination of some exciting recent results from a large project led by Sheri Strydhorst, Alberta Agriculture and Forestry, Laurel Perrott’s graduate research project and other PGR trials I have completed.”

Researchers now know that different types of cereals respond differently to the various PGRs. As well, cultivars of the same cereal species do not respond equally to PGRs. However, in those cereals where a response was noted, small yield gains were measured in barley and wheat. “We have also determined how to accurately stage the crops when using PGRs,” Hall says. “For PGRs that inhibit gibberellin biosynthesis [chlormequat chloride (Manipulator) and trinexacpac-ethyl], the appropriate stage is when cereals go into the elongation phase. At this stage, gibberellins are active and basically signal the crop to begin expanding the small nodes at the base of the crop, allowing the stem to elongate. This is the appropriate stage for application of PGRs. We can also assume, based on research literature from Europe, that applying gibberellin-inhibiting PGRs at this stage redirects plant resources from stem elongation into other parts of the plant. Therefore, crop height is reduced, while stems and roots may get thicker, lodging may be reduced and yields may increase.”

In this new study initiated in 2017, two PGRs are being compared individually and in combination at various rates on barley, wheat and oat. Hall notes that as researchers they are trying to explore the potential scope and outer limits of using PGRs, so some of the research trials and rates are practices that are not recommended and that growers would never do. Trials are being conducted at three central Alberta locations including St. Albert, Barrhead and Vermillion. The PGRs being evaluated include chlormequat chloride (Manipulator), currently registered for use in wheat in Canada, and a new product, trinexapac-ethyl, which is not yet registered for use in Canada. The PGRs are being applied individually and in combination at varying rates from 0, 25, 50, 75 and 100 per cent of recommended rates, resulting in 25 different rate combinations. Various factors including crop height, lodging, maturity and crop yield are being measured.

“The various treatments were designed to show trends in the crops at the different locations,” Hall says. “We have most of the data analyzed for barley (CDC Copeland) and have some very interesting results so far based on this first year. The trials showed that chlormequat chloride on its own only provided a small height reduction in barley, something we expected from other research. On the other hand, trinexapac-ethyl alone did provide a decent response in height reduction, ranging from two to 11 per cent across the three locations. Surprisingly, when we applied a reduced rate of each PGR together in mixture, we consistently got a very short compact crop, with height reductions ranging from 10 to 14 per cent across the three sites. Although the higher rate combinations are more product than we would ever advise growers to use, what we found to be the most interesting is there is a place in the middle where a combination of the two PGRs at less than full rates was providing a very nice consistent response. So we believe there is a ‘sweet spot’ with reduced rates of each active, if the combination is allowed and is registered for use in Canada in the future, could provide a nice height reduction. This is a fairly standard practice in Europe where PGRs been used for years and in combination for various cereals.”

The first year results also showed a slight increase in maturity as the rates of both products were increased. The plants stayed a bit greener and dried down a little slower. Although overall this doesn’t present a significant disadvantage, it may help explain the yield gains. Overall, lodging only occurred at two locations, St. Albert and Barrhead. The combination treatments showed a lodging reduction by 36 and 30 per cent at St. Albert and Barrhead, respectively. At the 50-50 combined PGR rate, lodging was almost eliminated.

“In the trials where there was lodging, there was a definite negative effect on yield,” Hall says. “Comparing no PGR and a combined rate of 100-100, yields at St Albert were 121 per cent of the control and Barrhead was 130 per cent. This is not surprising as we know that lodging has a negative effect on yield, but what was surprising, was that even in the absence of lodging at the Vermillion site, we still saw a yield increase of 108 per cent with the use of PGRs. More importantly, we saw that increase not only at the extremes of twice as much product as a grower would use, but also at that 50-50 range. So while we are not proposing use twice as much product, we feel there may be some encouragement to actually look at half rates of each product in combination. Although we haven’t completed all of the data analysis, we are seeing those trends in all three cereals, wheat, oat and barley, which is giving us more confidence that these results can be replicated.”

“Another research goal is to see if we can be predictive about when would be a good year for using these products,” Hall says. “We want to emphasize that we are not supporting the use of PGRs every year in every field. We are trying to develop predictive modelling tools to help growers determine when the use of PGRs could be expected to provide a response. For these products to be successful, there are three conditions that must be met: responsive cultivar, abundant N and soil moisture. When the appropriate cultivar is grown under high productivity conditions including abundant soil moisture like we had in our trials in 2017, then we see these results. We also know that we do not see these results when don’t have a cultivar that is responsive, especially under drier conditions or where there is not enough N to support abundant growth.”

Researchers are actively working in other trials to determine which cultivars in barley, wheat and oat are the most responsive. The response to PGRs is cultivar specific and some cultivars are not responding as well as others. That information will be shared as it becomes available. For soil moisture, growers will have that information going into the season, which also allows them to make decisions on the N rate, and throughout the growing season. “With a predictive tool, growers would be able to determine how much soil moisture is available in early June around the time of PGR application, and combined with the N rates and selected cultivar, determine if a PGR is likely to provide a successful response,” Hall says. “Engage Agro has already developed an app in a beta version to provide some of that information. This type of app, enhanced with the modelling data we are developing and collecting, could become a predictive tool to help growers develop confidence they will see a good effect from a PGR application.” The project is funded by Engage Agro, Syngenta and ACIDF.

For now, growers are reminded that Manipulator is currently registered for use only in wheat in Canada. Currently, there are no established maximum residue limits (MRLs) in the U.S., so most Canadian grain buyers will not purchase wheat treated with Manipulator until this issue is resolved, potentially over the next few months. Syngenta submitted trinexapac-ethyl for registration in Canada in 2017 and is awaiting approval. Trinexapac-ethyl is registered for use on cereal crops in the U.S., and MRLs have already been established in the U.S. for export sales. As market constraints are addressed and more registered PGR options become available, growers will be able consider using PGRs to reduce height, decrease lodging and increase yield when used under optimal yield conditions.