Mar. 20, 2015 - Kansas State University scientists have released findings of a complex, two-year study of the genomic diversity of wheat that creates an important foundation for future improvements in wheat around the world.

Their work has produced the first haplotype map of wheat that provides detailed description of genetic differences in a worldwide sample of wheat lines. In genetics, a haplotype map is a powerful tool for transferring sequence-level variation to multiple gene mapping projects.

Plant scientists often look at the genetic makeup of an organism to breed new varieties for specific, desirable traits, such as drought, pest or disease resistance. Akhunov said the haplotype map gives scientists quick access to rich, genetic variation data that increases the precision of mapping genes in the wheat genome, and improves scientists' ability to select the best lines in breeding trials.

Akhunov's research associates, Katherine Jordan and Shichen Wang, are lead authors of the study, "A haplotype map of allohexaploid wheat reveals distinct patterns of selection on homoeologous genomes," which will be published in an upcoming issue of the journal Genome Biology. The project was coordinated through the International Wheat Genome Sequencing Consortium, and included groups in Canada, Australia, the U.K. and the U.S. Much of the work took place in Kansas State University's Integrated Genomics Facility.

The study included 62 wheat lines from around the world that were either modern cultivars or varieties not previously improved through formal breeding techniques, called landraces.

To reduce the complexity of the wheat genome, the research team developed a tool called "exome capture assay" to perform targeted sequencing of only functional parts of the larger wheat genome. This technique bypasses those parts of the genome that are repetitive, according to Akhunov.

The scientists found 1.6 million locations — called single nucleotide polymorphisms — in the genome where the wheat lines differed from one other. The research team used this information to describe the impact of these differences on the function of tens of thousands of wheat genes.

"Once genes controlling agronomic traits are identified, they can be used for improving wheat using not only traditional breeding approaches, but also new strategies that are based on biotechnology and molecular biology," Akhunov said.

"In the future, we will expand the set of wheat lines characterized using our sequencing strategy by including not only more genetically and geographically diverse wheat lines, but also by including close and distant relatives of wheat," he said. "These wheat relatives are known for being a reservoir of valuable genes for agriculture that can improve abiotic and biotic stress tolerance or other quality traits, and increase yield."

Akhunov said that genomics-based approaches are now being introduced into every wheat breeding program worldwide. "I am sure that we will see the impact of diversity resources developed at Kansas State University on wheat breeding within three to five years," he said.

"This study would be impossible without the computational and genomic infrastructure developed by K-State Research and Extension, the College of Agriculture and Kansas State University over the last five to seven years," Akhunov said.

Funding for the study was provided by the U.S. Department of Agriculture's National Institute of Food and Agriculture through the National Research Initiative. 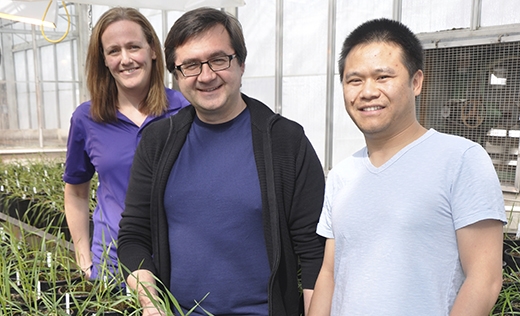 Kansas State University researchers are releasing a study that details the first haplotype map of wheat. The map is a genetic breakthrough for improving wheat varieties around the world. The study was led by Eduard Akhunov Researchers develop detailed genetic map of world wheat varieties.
Print this page