“Recent research from Agriculture and Agri-Food Canada estimates that 29 per cent of annually cropped land in Canada is occupied by herbicide resistant weeds,” says Breanne Tidemann, a graduate student at the University of Alberta.

Indeed, the Group 2 or ALS inhibitor products are the most common group that weeds are evolving resistance to, which is a particular problem for a crop such as peas that are mostly limited to ALS herbicides for weed control.

“We are evaluating a new herbicide, pyroxasulfone, which has been tested in Australia on peas and shown good tolerance,” says Tidemann. “Pyroxasulfone is a Group 15 herbicide and a relatively unique mode of action in the Canadian Prairies, which could really help our growers with weed control and in particular herbicide resistant weeds in peas.”

Pyroxasulfone is a soil-applied herbicide that can be used in the fall or in the spring pre-seeding or pre-emergence. Pyroxasulfone is currently registered for use on field corn and soybeans in Canada.

“One study initiated in 2011 compared pyroxasulfone rate and timing at five sites in Alberta and Saskatchewan with a wide range of soil types and organic matter levels,” explains Tidemann. “Pyroxasulfone is a soil-applied herbicide and, as a result, can be affected by organic matter levels, soil moisture and other factors. The sites we selected ranged from 2.9 per cent to 10.6 per cent organic matter. We also compared two timings of application, a post-harvest application in the fall prior to the pea crop and pre-seeding, the more typical timing of this product.” The rates included 0, 50, 100, 150, 200, 300 and 400 g ai/ha of pyroxasulfone and an application of Viper as an industry standard.

The results from this study, recently published online ahead of print in Weed Technology, showed that both fall and spring applications were effective, and there were no consistent differences in timing. However, organic matter and soil moisture did have an impact on the effectiveness of the herbicide at different rates and with different weeds. With wild oat, efficacy started at lower rates, but results were variable, with around 80 per cent control the average top level achieved. Cleavers could be controlled 100 per cent, with rates depending on location and organic matter.

The study also showed the higher the organic matter, the higher the rates of pyroxasulfone required, sometimes higher than what might be feasible. “With rates up to 200 g ai/ha, we did not see any pea crop injury, except in the spring of 2011 at the Scott and Kernan sites where they experienced 200 per cent of normal rainfall,” says Tidemann. “The rates considered effective at Edmonton resulted in crop injury at the Scott and Kernan locations in that spring. It seems that at higher soil moisture levels the herbicide is more active.” Overall the best weed control was at the lowest organic matter sites of Scott and Kernan. For those sites an application rate of between 100 and 150 g ai/ha is expected to be adequate, however rates will vary depending on location and organic matter levels.

Another field trial compared two soil-applied herbicides in combination, pyroxasulfone and sulfentrazone (Authority), a Group 14 herbicide, and their effectiveness on cleavers and wild oat at four sites in 2011 and repeated in Edmonton and Scott in 2012. The trial compared five rates of pyroxasulfone (0, 80, 100, 150, 200 g ai/ha), four rates of sulfentrazone (0, 105, 140, 280 g ai/ha) and all combinations of the two herbicides.

“We wanted to determine the effectiveness and interaction of the herbicides at the various rates,” explains Tidemann. “We wanted to know if the combination provided better than expected control or synergy, or if the control was worse than expected because they antagonize each other, or if the two products were additive. The results show that the interaction of the two products seems to be additive and the benefit from the combination is a broader spectrum of weed control and management, and prevention of herbicide resistant weeds. Location, soil and environmental conditions also seem to have an impact on the effectiveness.”

A further study was initiated in the greenhouse to more closely examine the interactions of this herbicide combination. Various soil factors such as organic matter levels and soil moisture were compared. Results indicated that organic matter levels do have an impact on the rate for effectiveness. Tidemann is in the process of completing the final write up of these studies and expects to complete her thesis this spring.

So far, the studies indicate that pyroxasulfone has the potential to control weeds such as wild oat, cleavers and kochia, depending on the location and environmental factors. Other weeds such as green foxtail, downy and Japanese brome, are being studied in other trials, and seem to show good control. “FMC Corporation expects to have registration for pyroxasulfone products for spring and winter wheat approved by the end of 2014,” says Tidemann. “Registration for a combination product with sulfentrazone for peas is also expected in 2015. If registered, pyroxasulfone products will provide another alternative tool for reducing the risk of herbicide resistance and managing Group 2 resistant weeds.” 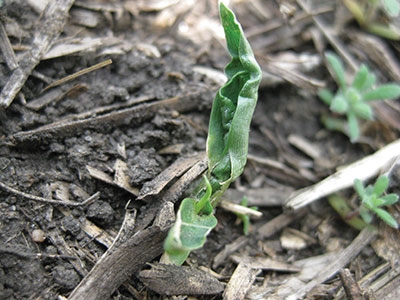