After a major research and development initiative, triticale now has a solid foundation for diverse potential uses of its grain and straw. This high-yielding, low-input crop is currently taking off for livestock uses and seed production on the Prairies. And it has strong appeal for growers who enjoy the challenge of building their own market opportunities.

Advances toward new uses
Despite the crop’s many positive attributes, triticale acres on the Prairies have remained relatively low. However, the Canadian Triticale Biorefinery Initiative (CTBI) recognized that this minor crop has major potential.

This initiative, which started in 2006, is aimed at developing triticale as a dedicated industrial crop. The CTBI involved about 60 professionals, including scientists, engineers and industry developers, from 11 agencies. During its seven years, the CTBI received over $20 million in funding; most of that was from the Agricultural Bioproducts Innovation Program of Agriculture and Agri-Food Canada (AAFC) and the Alberta Agricultural Research Institute (now Alberta Innovates Technology Futures), along with some funds from agencies participating in the initiative.

The CTBI’s 29 projects focused on six themes. Many of those themes involved topics related to “biorefining” – manufacturing processes for converting agricultural and forestry feedstocks into valuable products. These themes included studies of primary, secondary and tertiary processes to turn the crop into fuel, industrial chemicals, composite materials and other uses, and an evaluation of the commercial potential of these new possibilities. Other themes focused on breeding considerations related to developing varieties with enhanced qualities for specific end uses and superior agronomic performance.

Dr. François Eudes of AAFC, a founder and co-leader of the CTBI, highlights a few examples of the initiative’s many achievements: “First of all, it built a network of scientists and raised the interest in this crop. That was especially important because triticale is not a commodity in the sense that wheat and barley are, so there is no check-off collected to reinvest in triticale research.

“The CTBI’s biggest impact was to increase our knowledge of all aspects of the plant species and its use. For example, we generated a lot of information about triticale’s use in the feed industry and especially in ethanol and feed. A number of our publications described the benefits of triticale over other Prairie grains for ethanol production as well as DDG, dried distillers’ grain [a co-product of ethanol processing], for feed for dairy cattle, beef cattle and swine.

“And we discovered many properties of triticale for various industrial uses. For example, we learned that triticale straw is easier to pulp and bleach than other cereal straws, softwood or hardwood, and we learned more about the properties of the pulp produced. Another example is the use of the straw for manufacturing of composites. Two different groups have worked on that, coming up with recommendations and formulations on how to use triticale straw for thermosets or composites.

The CTBI’s biological studies also shed light on other considerations related to crop improvement. “For example, we are interested in deploying novel technologies in triticale improvement, which means technologies that could be considered as GM or non-GM. To look into biosafety questions related to that, Dr. Linda Hall at the University of Alberta studied pollen flow, seed dispersal of genes and other issues. So we now have a biology document that could be handed to the Canadian Food Inspection Agency [which regulates plants with novel traits] if we were to proceed with triticale plants with novel traits,” says Eudes.

For grain grower Leo Meyer, one of the CTBI’s most important achievements was the creation of a research platform.

“The research platform is an established process and systems to breed a species. In an effective research platform, leading-edge knowledge, capacity and collaboration come together for a successful outcome, and in our case a proven successful outcome. Our platform can be used for breeding any other crop species. It’s world-class platform, including a combination of conventional and biotechnology breeding,” explains Meyer, who was chair of the CTBI’s steering committee.

Meyer also emphasizes the CTBI’s global relevance: “We are aiming for a crop species between corn and conventional cereals, with corn’s diversity of uses but with greater environmental sustainability. Corn needs very good soils and lots of water and nutrients, whereas triticale can grow with much less water and nutrients. So triticale will be a much better fit in many parts of the world, especially on more marginal land.” He is also excited by other potential improvements to triticale – like the ability to inoculate the crop with bacteria to fix nitrogen or gather phosphorus from the soil – to make the crop even more sustainable.

Why triticale?
“Triticale, a hybrid of durum wheat and rye, takes advantage of some of rye’s productivity and ability to do well under drought conditions and fertilizer-limited conditions,” explains Dr. Jamie Larsen, a crop breeder at AAFC. “A number of projects completed through the CTBI show that triticale produces a large amount of biomass, a greater amount than wheat in some cases, and the grain yields for spring triticale are comparable to soft white spring wheat yields or higher. The ethanol yield is also quite high because there’s a fair bit of starch in the kernels.”

Larsen also notes triticale has good yield stability across a range of soil and climate conditions. Furthermore, compared to many other crops, triticale can get by with less fertilizer, it tends to need fewer herbicides because it can outcompete weeds, and it may need lower fungicide inputs because it is resistant to various diseases that are common on the Prairies.

“So the margin – the amount that you get for the grain minus the inputs – is much better for triticale,” notes Larsen.

Meyer, who farms north of Grande Prairie, Alta., is passionate about the value of triticale as an economically and environmentally sustainable crop option. He has been involved in triticale production since his childhood in Europe, and was one of the producers who founded the Alberta Oats, Rye and Triticale Association.

Meyer likes many of triticale’s production characteristics such as its high yields, disease resistance, competitiveness with weeds, and harvestability, and its role in diversifying crop rotations. And he likes triticale from a marketing perspective. “It fits well with the marketing system we have on our farm, because it allows us to operate outside the conventional grain procurement system. Triticale is usually handled from a farm to a customer somewhere, domestically or internationally,” he explains.

“Also, triticale has many applications – biofuel, fibre, feed, food uses like special breads and as an alternative to rye in the distilling market. It’s a fantastic silage crop, and it is good for intercropping with crops like peas or oats for things like silage. And triticale, especially fall triticale, is excellent for livestock producers who want to underseed a tender type of grass.”

What’s ahead?
Although the CTBI has ended, Eudes says there is still some Canadian research on triticale, mostly on triticale biology, breeding and genetic engineering, being conducted at AAFC, AARD and some other agencies. He adds, “I still believe there is a huge potential for triticale as a dual-purpose crop. For example, the grain could be used for human food or livestock feed and the straw for an industrial end use, like pulping. Also the chemical industry is more and more interested in obtaining some of their chemicals from crops and forestry, so triticale could be well positioned there as well.”

The CTBI was originally intended as a 10-year initiative, and Meyer is very disappointed the funding has ended. However, he believes the CTBI has set the stage for a “bright future” for triticale. “Triticale could take off and become much more widely grown, depending on what markets emerge. But the economy and markets are changing all the time. For instance, the energy market is shifting. And if corn is not $7.50 anymore but $4 or $3.50, then that makes a difference to everything,” notes Meyer. 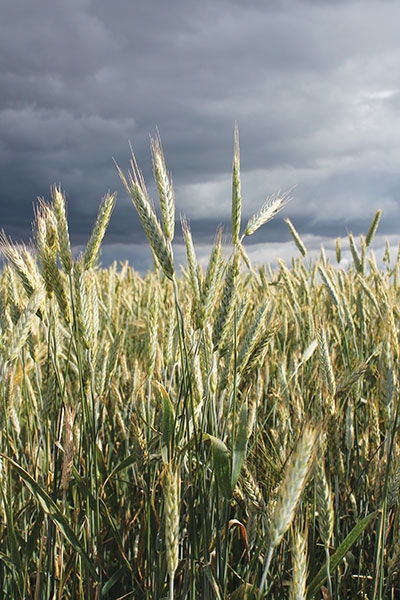