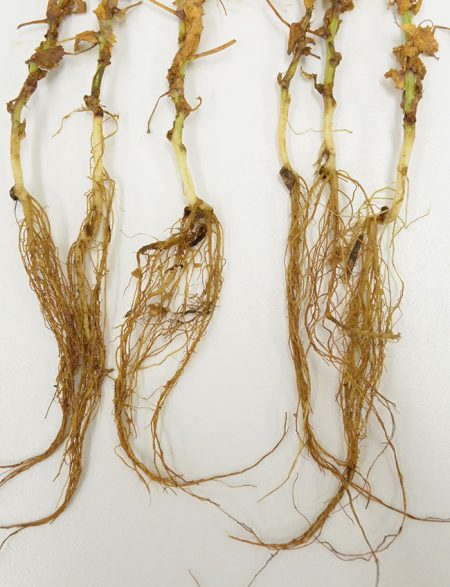 Root rot is a concern in the pea-growing areas of Western Canada and can cause significant yield loss. Pea root rot disease is caused by different pathogens, such as Fusarium species, Aphanomyces euteiches, Rhizoctonia solani, and Pythium spp. In Alberta, F. avenaceum has been identified as a predominant pathogen.

Syama Chatterton, a research scientist in plant pathology, led research conducted at AAFC Lethbridge to assess the ability of the main Fusarium species pathogens to cause root rot disease (pathogenicity) in pea, and to evaluate which crops/varieties can be infected by two Fusarium species.

The majority of the examined isolates were pathogenic and showed a range of aggressiveness from weak (DS=1-3), intermediate (DS=4-5) to highly (DS=6-7) aggressive.

Fusarium solani f. sp. pisi and F. avenaceum were chosen for further testing on common rotational crops grown in Alberta because of their ability to cause severe disease on pea. Ten cereal, oilseed and pulse crops were inoculated with isolates of those species in the greenhouse.

The overall findings indicate that F. avenaceum and F. solani f. sp. pisi found on pea are aggressive on some varieties of chickpea, fababean and dry bean. These species were not aggressive on cereals, soybean, lentil or canola, which suggest that these crops can be planted in rotation with pea even if Fusarium root rot pathogens are present. However, risk to fababean, chickpea and dry bean when grown in rotation with pea needs further testing in the field.

In addition to this research, Chatterton is involved in multiple studies looking at Fusarium root rot and Aphanomyces root rot. Surveys from 2014 to 2017 found that Aphanomyces was widespread across the Prairies. One study looked at the effect of seed treatment to control Aphanomyces. She found no effect of most treatments over four years at four field locations.

Currently, the recommendation to manage root rots is a six- to eight-year rotation away from pea and lentil, but based on research from other parts of the world, Chatterton looked at several fields to assess Aphanomyces and Fusarium root rot infestations. One field at Red Deer had peas grown in 2011. Six year later, the disease severity was coming down and was low in 2018, producing very high yields – indicating that a six- to eight-year rotation without a susceptible pulse crop might be appropriate. A new rotation study was started in 2018, with one to eight year breaks between a pea crop, with or without an alternate pulse crop in the rotation. So far, soybean and fababean could be good pulse crop options for managing Aphanomyces, and chickpeas might be a good option as well. But with only two years of results, solid recommendations will have to wait.

Legumes in a cover crop mix are also being investigated. Vetches, clovers, lupins and peas were planted and then tested for the presence of Aphanomyces and disease severity.

The vetches were very susceptible to Aphanomyces. Crimson, Yellow blossom and Persian clovers didn’t get a lot of disease, but still supported Aphanomyces. White Dutch, Red, Subterranean and Berseem clovers and lupins didn’t get the disease, and didn’t support Aphanomyces colonization.

Chatterton has had some success in the greenhouse with liming to prevent oospores from germinating. Hydrated lime seemed to work the best. The next step is to try to replicate the results in the field.

Pulse growers who relied on a solid rotation of canola-barley-pea-wheat have seen their pea crops collapse under root rot pressure after about 20 years of this rotation. These trials will help to develop new guidelines for pulse crop rotations, which will reduce the impact of Fusarium and Aphanomyces root rots – and help get back to diverse, profitable crop rotations.