Cabbage seedpod weevil was first found in canola crops in southern Alberta in 1995, and has since spread to central Alberta, much of Saskatchewan and recently reached Manitoba. Originally, a nominal threshold level canola growers were advised to spray was three to six weevils per one 180-degree sweep at the early flower stage based on experience from Washington State. 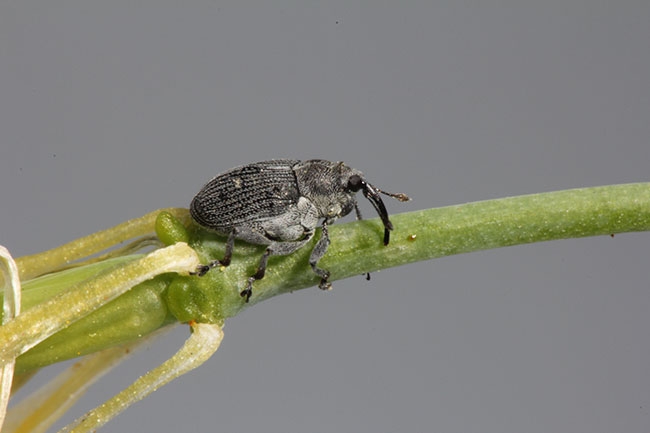 A revised threshold of 25 to 40 weevils per 10 sweeps has been established. Cabbage seedpod weevil was first found in canola crops

“We did a farm study on 70 fields in southern Alberta over four years to establish the economic injury level for cabbage seedpod weevil. It was established at 20 weevils per 10 sweeps,” says Héctor Cárcamo, research scientist at Agriculture and Agri-Food Canada in Lethbridge, Alta. “However the nominal economic threshold level was set higher to accommodate additional factors.”

The economic injury level is the break-even point where the economic yield loss equals the cost of insecticide application. The nominal economic threshold can be different based on a number of factors such as changing canola prices, crop staging, how quickly an insect can cause damage to the crop and the impact of beneficial predators on the insect.

“Previously, when there was just one number, growers would get concerned if they reached the threshold level. With a range, they realize there’s no need to panic if you hit the 25 weevils threshold. Growers can continue scouting and wait to see if the numbers increase enough to justify spraying,” Gabert says. “We think using a range is better than a single number because it gives growers a bit more guidance to make decisions.”

The range also better accommodates different crop stages based on seeding date. Cárcamo’s research found that early-
seeded April canola fields were most at risk from weevil damage and benefited from insecticide control but only when the nominal economic threshold level was reached.

Fields seeded later into early-to-mid May were less susceptible to weevil infestation. These fields were found to reach economic thresholds when cool spring conditions delayed weevil spring activity or if seeding was generally delayed in the area. Late seeded fields after mid-May seldom required weevil management.

A revised threshold of 25 to 40 weevils per 10 sweeps has been established.

“In most fields by mid-July this summer we were finding fairly high numbers of a parasitic black wasp. That’s another reason not to spray or to use the higher range of the threshold,” Cárcamo says.

Revised scouting procedures
Based on Cárcamo’s research, scouting recommendations have been refined as well. The previous recommendation was to
sample 10 locations within a field, but was found to be too onerous. Often, this resulted in fewer sweeps being conducted, usually along the field edges were weevils could be more abundant, resulting in higher counts and unnecessary spraying.

Cárcamo found that a good assessment of weevil numbers could be obtained with four samples per field. Scout at 10 to 20 per cent flower. Do one set of 10 walking sweeps (180 degrees) at the field edge and another set 50 metres into the field. Repeat the two sets at the opposite end of the field.

“The new sampling protocol is a fairly reasonable request for crop scouts and growers, and should mean better spray decisions,” Gabert says. “I would also caution that if the canola field is uniform and your numbers are wildly different between locations, consider scouting in additional locations within the field to get an accurate average.”

If a grower decides to spray, insecticide application should target the adults at the 10 to 20 per cent flower stage to prevent the adults from laying eggs in the developing pods. This is the stage when 70 per cent of the plants have at least three to 10 open flowers and the first pods are large enough to accommodate egg laying at about an inch in length. This is usually about one week after the first flower is seen in the field. Additionally, if there is no pod development, hold off on spraying because there aren’t any pods for the weevil to lay eggs.