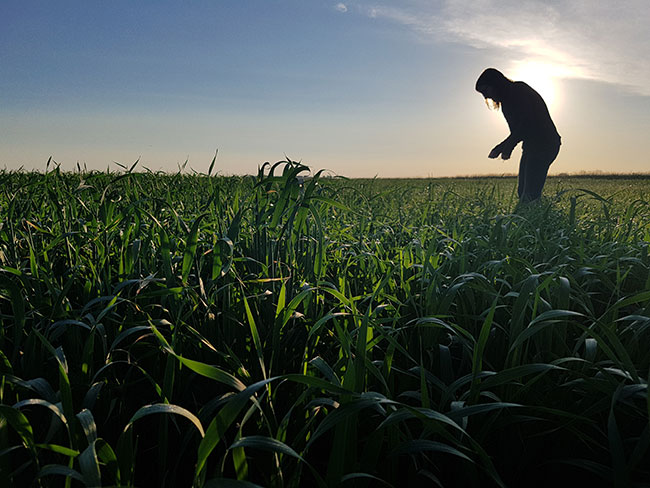 Technological advances have changed the way pests and diseases are controlled in fields, with less reliance on human labour. Photo by john hildebrand.

We believe that the agriculture industry in North America will take the first steps towards a dramatic change of direction during the next decade.”

The paper, which was published in the Canadian Journal of Plant Pathology, looks at how new technologies could enhance natural control of insect pests and disease management and reduce reliance on synthetic pesticides.

It argues that a shift to larger farms and bigger equipment has led to a reduction in genetic diversity in the field and contributed to reduced efficacy of pesticides and the “erosion” of cultivar resistance to diseases.

But technological advances in both equipment and plant breeding will help the agriculture industry return to a model that allows for greater biological diversity and thus improved natural pest and disease control in the field, McDonald says.

Equipment
As fields get bigger, bigger equipment is required, and human labour becomes more expensive, McDonald notes. “But if you have solar-powered, autonomous equipment and robotics, they can work day and night and the efficiencies are totally different – you’re not trying to make the human labour as efficient as possible,” she explains.

This doesn’t necessarily mean that, with the adoption of robotics, farms will become smaller.

“In an ideal situation, you could still manage a 10,000-acre farm with a swarm of robots, small seeders, sprayers or harvesters. They’d [perform tasks] at the optimal soil moisture for seeding, the optimal maturity for harvest,” she says. “The big thing is being able to seed and harvest different crops in the same field. You get back to more of the biodiversity and all of those advantages of intercropping or strip cropping and crop rotation.”

Robotics in agriculture can perform a range of services, from pest identification and management to weeding, aerating and harvesting; these products will first become common in high-value cash crops, vineyards and fruit production, before they become widely used in field crop production, McDonald says. For instance, drones can be used to spot-spray fungicides in vineyards on hillsides where it is difficult to use ground-based sprayers.

Autonomous farm equipment is not just a fantasy: at least one company already sells machinery like this in Canada, while most major farm implement manufacturers, including John Deere, Case IH and New Holland, have developed autonomous tractors in the U.S.

The shift to smaller, modular equipment will be driven by economics, McDonald and Gossen write in the paper. Autonomous equipment can work night and day and require input from the producer only if problems arise.

“Small, interchangeable pieces of equipment have the (as yet untapped) potential to be more cost effective and environmentally friendly than today’s juggernauts,” they write.

McDonald believes such advances will naturally fine-tune the way land is managed. For example, today’s massive sprayers have difficulty avoiding low spots, which smaller equipment has no problem navigating around.

Precision farming is already changing for the better with advancements in yield monitor technology: yield monitors can tell farmers which parts of a field are not productive enough to bother seeding, and these areas can either be reverted to a natural state or put to other uses.

“I remember at a fruit and vegetable conference a couple of years ago, a young farmer was saying he was working with a precision farming company and doing grid soil testing and realized that a 10-acre plot of land wasn’t going to be productive for vegetables or standard grain crops, but they figured out it would be good for fruit trees,” she says.

“He’s been proactive at making sure he can farm ecologically while still making a living.” 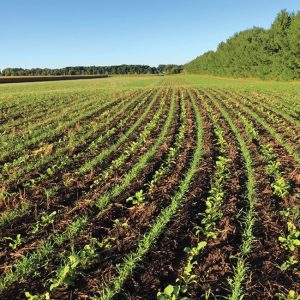 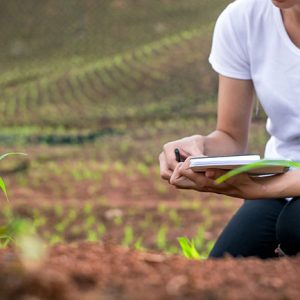 Plant breeding and gene editing technologies have been developed to combat pest pressures, but there’s no silver bullet just yet. © doidam10 / Adobe stock.

Plant breeding and the way forward
Advances in new technology are not confined to equipment. In the paper, McDonald and Gossen point to developments in disease detection, weather forecasting and modelling, and plant breeding.

The latter has become immeasurably more efficient with the introduction of genetic marker-assisted selection, which has also made trait stacking possible. Gene editing using CRISPR technology and RNA interference (gene silencing) are two technologies that have been deployed in recent years to help combat specific pest pressures. And DNA sequencing can help identify pest pressures to better fight them.

None of these technologies is a “silver bullet,” and resistance to them can still develop in pest populations. But they can help plant breeders bake greater levels of complexity into their breeding programs.

The main thrust of McDonald’s research over the years has been integrated pest management (IPM). Over the past 20 years, she says pesticides have become less toxic and more specific, which is better for the environment, but means it’s easier for pests and diseases to become resistant to their modes of action.

“Then we get onto this pesticide treadmill, where we have a really effective material that’s pretty safe to use but five years later it’s not effective anymore because our target pests have developed resistance. So that’s where we come back to the need for the original approaches to pest management,” she says. “If we don’t reduce the use of these products they just won’t work anymore. The industry is very good at coming out with new materials but they can’t keep up.”

The industry will need to rely on a combination of approaches, including improved genetics and targeted chemistries, while always leaning toward increasing genetic diversity in the field.

The point of this research, she says, is not to lecture farmers, many of whom are implementing new technologies as soon as they become available. Rather, it’s to give a sense of the directions farming is headed over the coming decades.

“It doesn’t have to go in the direction of ‘bigger is better,’” McDonald says. “The technology is out there and we’re starting to ask how self-driving technology can be used to address other questions: What part of the farm should be farmed? Can I diversify the crops in the field?

“I have huge respect for farmers because they’re balancing so many things with their decisions every day and every year. They’re the ones who are trying to integrate all this information in terms of what it means. And they’re at the mercy of the weather,” she says.