Clubroot disease in canola continues to pose a serious threat to the canola industry in Western Canada. The problem so far is mostly a central Alberta concern, and although the 2014 disease survey results are not yet complete, preliminary results show that clubroot has spread to at least two more counties in central Alberta. Isolated cases have been identified in Saskatchewan, Manitoba and North Dakota.

The disease is particularly a problem because its spores are long-lived, it has the ability to rapidly multiply and it has a detrimental impact on canola yields. Researchers at the University of Alberta and Alberta Agriculture and Rural Development (AARD) in Edmonton conducted a four-year study from 2010 to 2014 to determine the effects of clubroot-resistant and susceptible canola cultivars on soils infested by Plasmodiophora brassicae, the pathogen that causes clubroot.

“Clubroot continues to be an increasing problem, and in some cases with short rotations we have seen resistant lines being overcome by the disease,” says Dr. Sheau-Fang Hwang, research scientist with AARD. “Ideally, longer crop rotations are the best. But in reality, short rotations are becoming more common. Therefore, we designed this experiment for short rotations and to determine the effects on disease severity in subsequent crops, resting spore populations and other factors.”

To understand the impacts of repeated cropping, clubroot resistant and susceptible canola genotypes were compared to fallow in a three-year continuous rotation. In the fourth and final year, a susceptible canola genotype was grown on all plots. The study included greenhouse trials, mini-plot trials using naturally infested field soil and field trials near Edmonton. Clubroot-resistant (45H29) and susceptible (45H26) canola cultivars were grown in a field near Edmonton that was heavily infested with P. brassicae resting spores.

“As expected, the results showed that repeated cropping of susceptible varieties (SSSS) contributed significantly greater levels of fresh inoculum to the field or field situations, resulting in much higher disease severity and spore numbers,” explains Dr. Stephen Strelkov, with the University of Alberta. “With the clubroot resistant varieties (RRRS), the increase in spore levels were much lower and in fact were more or less equivalent to the fallow (FFFS) plot spore levels.”

At the end of the fourth cropping cycle with the susceptible cultivar, clubroot severity was 10-fold greater in the SSSS cropping sequence relative to the RRRS sequence, but there was no difference in severity between the RRRS and FFFS sequences.

“The results also showed that compared to resistant lines, the susceptible lines had a significantly higher fresh root weight, which is a result of greater root gall mass,” says Hwang. “The bigger galls contribute even more inoculum into the fields.”

Hwang adds that growers should also consider rotating the resistant varieties they grow in rotation. “Although we don’t really know the type of resistance sources involved in the available varieties, it is still a good idea to not grow the same variety every year,” explains Hwang. “Rotation of both varieties and crops is important to reduce the selection pressure for overcoming resistance. We are looking to plant breeders to hopefully provide resistant lines with different resistance backgrounds to help address clubroot disease.”

Regardless of the nature of resistance, careful management and stewardship are important in order to maintain its durability.

It is also important to remember resistant and susceptible cultivars are usually resistant to the same herbicides. So under frequent rotations, more susceptible volunteer canola plants from previous crops could be expected, and these would contribute to spore loading in subsequent crops.

Growers need to be aware of clubroot concerns, be vigilant in scouting and monitoring, and plan ahead for their operations. “Over the vast majority of places, resistant varieties are effective and are still a good option,” says Strelkov. “In areas where clubroot has not yet been confirmed but could be at risk, it may be a good preventative strategy to grow resistant varieties. Therefore, if inoculum is introduced, then it won’t have as great of chance to build up in the soil. If growers see anything unusual or find resistant varieties with lots of disease, then bring that information to agronomists or company reps so any potential issues can be addressed.”

Effective clubroot management in canola will largely depend on growing resistant cultivars and the reduction of viable resting spore populations in the soil. Good crop rotations are important, and controlling volunteers and weeds all help to reduce the inoculum levels and disease severity in fields. 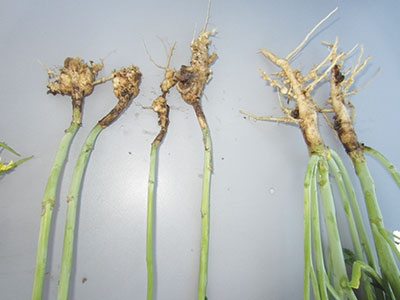 The susceptible canola cultivar with root galls (left) compare with a healthier resistant canola cultivar (right). Clubroot disease in canola continues to pose a serious threat to the canola industry in Western Canada.