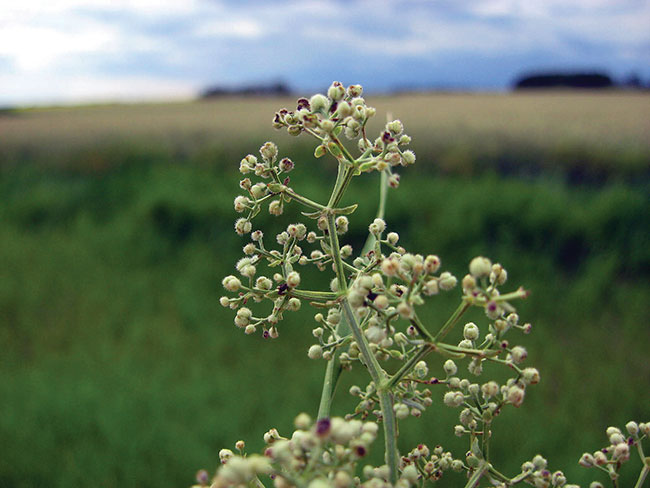 Seed head of cleavers in the field. Photo courtesy of Christian Willenborg.

Cleavers, which are difficult to manage in many crops, can reduce yield and quality and interfere with harvest operations. As well, recent weed surveys showed that about 20 per cent of cleavers in Saskatchewan have evolved resistance to ALS-inhibitor herbicides, and cleavers are also considered a high-risk weed for evolved glyphosate resistance. Therefore, a better understanding of the weed biology and development of alternative management strategies is critical.

“In our research program, and others, there is starting to be more of an emphasis on seed shed management and managing the weed seedbank as part of an integrated weed management program,” explains Christian Willenborg, associate professor in the department of plant sciences at the University of Saskatchewan. “Seedbank management, which includes managing seed returns to the seedbank, is a critical component of managing herbicide-resistant weeds. Why do we wait until weeds have two, three or four leaves before we exercise weed control? Although we can and do a very good job of control with post-emergent herbicides, we wondered if should start looking earlier in the cycle at factors such as seed shed management and managing weed seed bank as well.”

In a recent project, Willenborg and his team were interested in learning more about cleavers weed biology, first by identifying which species of cleavers are found in crop fields in Western Canada and then determining if there are differences in their emergence patterns. A second objective was to determine if a pre-harvest herbicide application could help influence the seed characteristics and reduce seed returns to the seedbank. As more growers are wanting to move to straight cut harvest of canola, researchers were interested in finding out if pre-harvest herbicides could help reduce the viability of the large number of seeds, up to 10,000 seeds per acre, produced by cleavers plants. 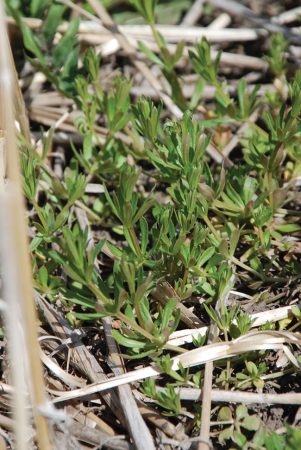 Cleavers can reduce crop yield and quality and can interfere with harvest operations. Photo by Bruce Barker.

The two main cleavers species researchers expected to find included Galium aparine (cleavers or catchweed bedstraw) and Galium spurium (false cleavers), which are problematic weed species in canola. A large number of seed samples were collected from seed cleaners and growers across a large area. Researchers were surprised by the results of the molecular work, which showed that all of the populations collected were actually G. spurium. G. aparine, which tends to prefer wetter, shadier more hedgerow type habitats, may also found in some locations in Western Canada, although none of the samples processed by the team were G. aparine.

“We took the project a step further to try to develop a predictive model that could accurately predict emergence timing for cleavers,” Willenborg says. “However, we were missing one of the key variables for developing a model, which is base temperature. Each species has its own base temperature, or the minimum temperature that will allow for biological activity (germination) in a plant. Although there is information from other locations like Australia on base temperature for G. aparine, we were unable to find any available information on G. spurium.”

To determine the base temperature, all of the populations were screened using a thermogradient plate technology located at Agriculture and Agri-Food Canada, which includes a number of individual cells that can each be individually controlled to a precise temperature set at 1 C increments. This allows for properly replicated experiments, as well as the ability to sample and compare a number of populations at the same time. 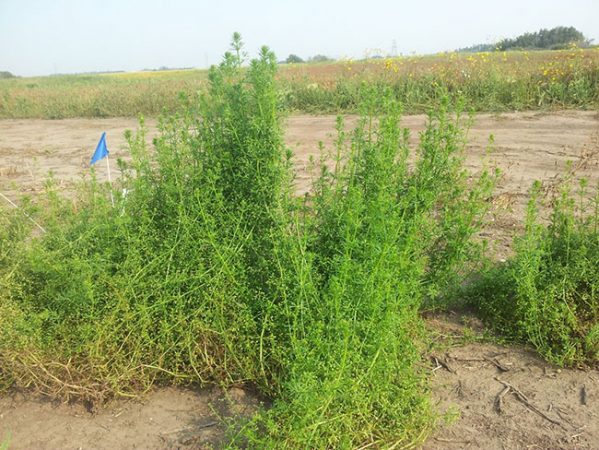 “Our results showed that all of the western Canadian accessions of G. spurium have a base temperature of 2 C and can germinate at very low temperatures. The base temperature for G. aparine is similar at 4 C, while some weeds are closer to 0 C base temperature. This also confirms what we saw in the field and shows that this weed is capable of germinating as early as April and as late in the season as November. Traditionally, cleavers have been considered an obligate winter annual that only germinates in the fall. However, we have confirmed cleavers is a facultative winter annual and can germinate in both fall and spring, likely due to the base temperature and other factors that control germination. This has implications for weed management, and producers should scout fields late into the fall and early in the spring after the snow has melted to ensure identification of early emerging or overwintering cleavers populations.”

In the second part of the project, a two-year field study was conducted in 2016 and 2017 at two sites, including Saskatoon and Scott, to evaluate the effect of pre-harvest herbicides on cleavers contamination in canola crops, as well as mature cleavers seed viability and vigour. In the study for research purposes, several herbicides were evaluated including saflufenacil, diquat, glufosinate, saflufenacil plus glyphosate, diquat plus glyphosate, and glufosinate plus glyphosate. The researchers faced some of the same challenges growers will face in applying the pre-harvest herbicides and getting them through the canola crop canopy onto the cleavers, as well as cleavers establishment in some of the plots. However, overall the results did show a clear trend.

The study showed that the glufosinate plus glyphosate and saflufenacil plus glyphosate applications resulted in significantly lower cleavers contamination and seed viability than most other treatments. These treatments allow the herbicide time to be translocated into the seeds, as compared to true desiccants that act extremely rapidly and kill the seeds they contact but don’t move in the plants. The other treatments did result in a small reduction in viability as compared to the control, but not as significant as the others. The study also showed that pre-harvest herbicides have the potential to manage cleavers seed production and reduce competition with canola by increasing seed mortality, and by reducing seed viability and vigour. Willenborg notes that for the research project, they did not test for pesticide residues. However, growers are cautioned to follow label directions for pre-harvest intervals and be aware of maximum residue limits (MRLs) and market requirements before application.

“Our results show that seed shed management and managing the weed seedbank as part of an integrated weed management program is a good strategy to consider,” Willenborg says.

“Producers should be scouting fields late in the fall and early spring for cleavers, and controlling these populations early,” Willenborg adds. “There are some good post-emergent products in cereals, but in some other crops there are less options for cleavers that are large in size. The best strategy for crops such as peas and lentils with more limited cleavers control options is to manage it the year before in cereals in-crop or including some sort of harvest aid. Herbicide options are getting better in canola with the registration of clomazone and quinclorac, but cleavers can still be problematic depending on their size. With the increasing incidence of cleavers across the Prairies coupled with the increasing acres of glyphosate and glufosinate-resistant canola, an opportunity exists to improve cleavers management by targeting the seedbank.”