While research on the implications of using reduced-rate herbicide applications is lacking in Ontario, research conducted and reviewed elsewhere can help shed some light on the issue. 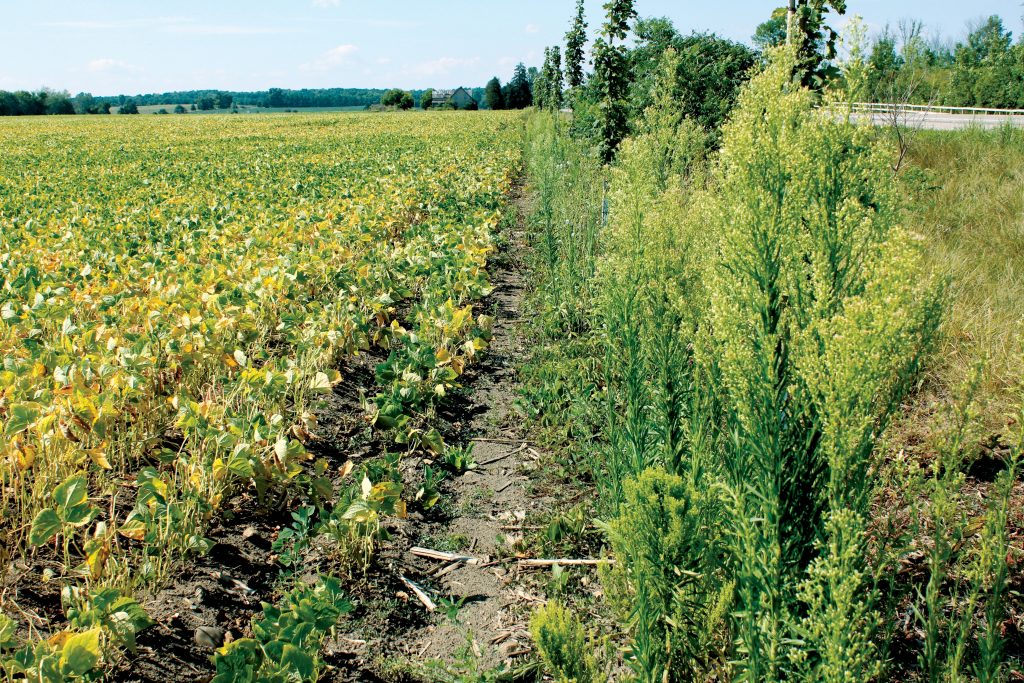 According to Jason K. Norsworthy, associate professor at the Dale Bumpers College of Agricultural Food and Life Sciences, University of Arkansas, recurrent exposure to low-level herbicide doses that allow any part of the weed population to survive could have unintended consequences. Norsworthy makes the case in his paper, Reducing the Risks of Herbicide Resistance: Best Management Practices and Recommendations, published in a 2012 special issue of Weed Science. Repeated low doses risk the accumulation of minor genes, which, on their own, may give the weed only a slight edge when it comes to survivability, but if combined with other genes, could actually lead to significant levels of herbicide resistance. Scientists refer to this as “creeping resistance.”

So, why use reduced-rate applications in the first place? For some producers, it’s a matter of economics, especially where herbicides are costly.

“Although there is a perception that reduced rates provide short-term economic benefits to the growers, especially on lands that are leased, the costs of evolving herbicide resistance exceed monetary savings achieved through reduced herbicide doses,” states the Norsworthy paper. Tardif adds that while farmers might be willing to reduce herbicide rates to cut costs, they won’t do so if weed control is compromised.
According to Mike Cowbrough, Ontario Ministry of Agriculture and Food (OMAF) weed specialist, since herbicide costs aren’t particularly high, the savings from using reduced-rate applications are minimal.

“If anything, the inexpensiveness of glyphosate has probably erred people on being more generous than being more frugal or cutting rates,” he says. “Cutting rates usually comes about when something is expensive, so when something’s cheap you tend to not worry as much.”

More often than not, reduced-rate applications are completely unintentional. Since producers try to get as close to 100 per cent control as possible, most cases of resistance do not occur in the middle of fields.

They do, however, occur on the field’s peripheries, where spray drift leads to unintended, and often repeated, low-level herbicide applications. Unintended low-rate applications can occur in a number of situations, such as where soil-applied, slow-degrading herbicides deliver sublethal levels to later-emerging weeds, especially in fields that see the same herbicides used over multiple growing seasons. Low-rate applications also occur when plants that are larger than recommended receive inadequate coverage. Inadequate coverage can also be the result of plant density and crop cover.

Understandably, it’s not always easy to get weeds at the right size. Challenges arise particularly in large operations where spraying in one day is next to impossible. Others are challenged by labour shortages, and unfavourable weather conditions can make it tough to get into fields.

“Some of the smaller farms may not have their own sprayer, so they will hire a custom applicator who will do spraying for them,” says Tardif. Those companies will have a work list to go by and will sometimes work in less than perfect conditions, he adds.

“At a very broad genus level, I think producers and agronomists are pretty good,” says Cowbrough. “They can get it down to a family. They can get it down to a genus. It’s a bit tougher to get it down to a species, and that sometimes shines a light on why a herbicide is starting to fail or there’s a shift in populations.”
Misidentification is understandable, says Cowbrough, because it’s a very small portion of a farmer’s day-to-day activities. There are a lot of species – and a lot of look-alike species. Of all the weed species in Ontario, Cowbrough says, Canada fleabane is most often misidentified.

He is currently working on a weed identification guide, which should help producers to better identify individual weeds.

While some of the challenges producers face are certainly beyond their control, others are not. Precise sprayer calibration, for instance, is well within the producer’s control, as is correct mixing. When it comes to correct mixing, though, Tardif says there’s usually a little wiggle room.

“Even if environmental conditions are not favourable, there’s usually enough active ingredient present to still get good control,” he says. “Some farmers may go with a three-quarter- or half-rate and find it works fine one year. What may happen the next year, though, is that that reduced rate may not be as effective.”

So, while reduced-rate herbicide applications are known in some cases to contribute to herbicide resistance, it’s not as bad as one may think. Follow the label and be sure to apply at the right plant size (keeping in mind that there is some wiggle room). Pay attention to rotations, and don’t overuse the same modes of action. Most importantly, know your weeds. If it’s a problem weed, herbicides should be applied at the full, recommended rate.