While harvest always takes priority in the fall, in some years the combine is put away early, and an open fall provides the opportunity to control weeds before spring. And post-harvest weed control can be even better than a spring, pre-seed burndown.

“We went through a cycle when glyphosate came down in price and many farmers just used a spring glyphosate burn-off because it was so cheap. But we’ve found that narrow-leaved hawk’s beard and dandelion control in the spring isn’t very good. With some of the residual herbicides now on the market, post-harvest winter annual and dandelion control is a very good option,” says Ken Sapsford, research assistant at the University of Saskatchewan.

“In-crop control isn’t very good because the crop closes canopy and the dandelion goes dormant until the fall until the canopy opens up after harvest,” he explains.

Brenzil also notes that 20 years later, in the mid-1980s, Ken Kirkland, a researcher at the Scott Experimental Farm, did some work on the timing of 2,4-D applications for the control of stinkweed and flixweed. He found that applications made in late fall and early spring were the most effective, whereas applications in early fall missed some late germinating plants, and in late spring the winter annual plants were too big to be controlled effectively.

“With respect to winter annual broadleaves, the application of a phenoxy herbicide (2,4-D; MCPA) late in the fall, which mimics the plant’s own hormones, provides a signal to the plant to continue to grow when it should be entering dormancy for the winter, thereby reducing its cold tolerance and forcing it to expend energy resources that it will need for winter survival,” says Brenzil.

Best fit is for crops seeded later in the spring
Additional research conducted by Sapsford on pre-seed burndown timing provides guidance on which fields may benefit the most from post-harvest weed control. He found that early pre-seed control of winter annuals with a glyphosate application in the spring gave the best weed control and highest yield, even when seeding was delayed for several weeks.  But if the pre-seed burndown was delayed until late May, the late seeded crop had a statistically lower yield – winter annuals caused the yield loss. The research was conducted in years in which soil moisture was relatively good, showing that yield isn’t always strictly relative to moisture and that competition for other resources – nutrients and sunlight – can also have an impact.

“If you are delaying your spring pre-seed burndown on later-seeded cereal fields, you could be losing yield. A fall application with products that have residual control would be a good strategy, because they control those winter annuals in the fall and have some residual activity in the spring,” explains Sapsford. “You’ll know the winter annuals won’t be there in the spring, so you’ve helped to eliminate that weed competition.”

Sapsford says the fall application doesn’t necessarily eliminate the spring burndown on later seeded crops because spring germinating volunteer crops, wild oats and green foxtail will still need to be controlled prior to seeding, but those can be easily done with a spring burnoff just prior to seeding those later crops.

In addition to 2,4-D and PrePass (florasulam + glyphosate), glyphosate + Express Pro, is also labeled for extended weed control with a post-harvest application.

Mostly, cereal crops can be grown after any post-harvest herbicide application. Cereals have very good tolerance to 2,4-D. Research at the University of Saskatchewan also found that the lowest rates of 2,4-D can be used in the fall before planting beans, peas, lentils and chickpeas the following spring. Flax and canola should not be planted after a fall 2,4-D application. Wheat and barley can be grown after Express Pro, and wheat, barley and oats can be grown after PrePass XC.

Pulse, oilseeds and specialty crops are more sensitive to fall-applied herbicides, and growers should check labels for re-cropping restrictions.

Another approach in some farming systems is the original soil residual herbicides that can be used in the fall prior to many crops: Avadex (triallate), trifluralin (Treflan et al,) and Edge (ethalfluralin). They still have a fit for broad-spectrum weed control when applied in the fall.

Given the choices in herbicides and cropping restrictions, a post-harvest weed control application makes the most sense on fields where later seeded cereal crops will be planted. In these crops, the weed control recipe includes a post-harvest herbicide application with residual control of dandelions and winter annuals, followed up with a late-spring, pre-seed burndown just prior to seeding later in the spring. This approach can clean up tough weeds in the fall, reduce weed growth in the spring, take pressure off the timing of early season burndown applications and set the crop up for a weed-free start. Just remember to check the label for any cropping restrictions. 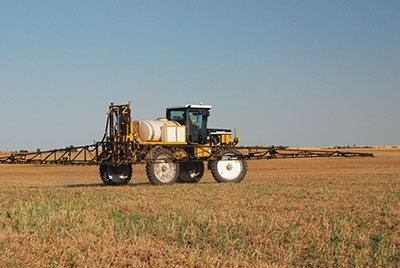