The long-term sustainability of the Canadian agriculture sector depends on its ability to thrive economically while protecting our natural resource base and building resilience to stresses and shocks. Modern agricultural systems prevalent on the Canadian Prairies, while often highly productive, are associated with a number of environmental and social issues that threaten the sustainability of the sector, including rising energy and input costs, greenhouse gas (GHG) emissions, loss of biodiversity, soil and water degradation, corporate concentration, global competition in production of bulk commodities, and a steady reduction in the number of farms.

Improvements in efficiency of input use and input substitution (e.g., herbicides instead of tillage) may not be enough to address the challenges facing modern agriculture. Instead, farming systems must be redesigned based on a new set of ecological relationships. In other words, agricultural systems require systemic change. We seek to highlight and evaluate the cropping practices and systems that might make up these redesigned Prairie farming systems. Key focus areas include diversified crop production systems (including crop rotation, intercropping, cover crops and agroforestry), reduced tillage, nutrient cycling through endogenous input systems (using manure and legumes), integration of crops and livestock, and the purposeful design of farm landscapes (farmscaping). We evaluated these systems in terms of their potential profitability, environmental sustainability, and resilience.

Assessment of farming practices for their role in the sustainable development of Canadian Prairie cropping systems
The farming practices we reviewed range from relatively simple modifications to systemic changes. Agricultural systems that most closely mimic natural systems appear to be the most resilient and environmentally sustainable due to their biological and enterprise diversity; integration, multifunctionality, and redundancy among components; effective nutrient cycling through promotion of soil biological activity and minimal use of external inputs; leveraging of natural ecosystem processes; and minimal soil disturbance.

It is important to note that these ecologically based whole-farm systems have not yet received much research attention and, therefore, have the most uncertainty associated with them. Given their potential benefits, they deserve significantly more research and development attention.

Farmscaping, crop-livestock integration, agroforestry, perennial forages, and perennial grains, complemented with use of manure and legumes for soil fertility and minimal soil disturbance, have the potential to make large contributions to sustainability and resilience. When such systems are designed to comply with organic production standards, market premiums further enhance their profitability.

Perennial forages in particular have a large and well-documented positive impact on environmental sustainability and resilience and are also technically feasible. While perennial grain systems appear promising, implementation of such systems is impossible until varieties become commercially available. Applied research on integrated crop-livestock systems, alley cropping, and farmscaping (including multifunction shelterbelts or “ecobuffers”) is needed to optimize and support implementation of these practices in the Prairie region. Local farmer knowledge of crop-livestock systems and farmscaping practices may be more developed than local research in these areas, as ecologically minded farmers make observations and experiment with practices on their own farms.

Profitability, sustainability, and resilience can be enhanced to some degree by adding diversity to annual cropping systems without a major change in the system. Practices that can be implemented relatively easily within annual cropping systems include crop selection and rotation, cover crops, reducing tillage, animal and green manures, soil biological fertility, annual polyculture, and crop varieties and genetics.

However, even these relatively simple practices have challenges associated with their implementation. For instance, optimal use of crop rotation may be limited by poor markets for all but a few crops, which causes farmers to shorten their rotations.

The sustainability of no-till farming is limited by its reliance on herbicides. Finding a temporal niche for cover crops in the short growing season of the Prairies remains a challenge, but novel ways of including and using cover crops, perhaps in integrated crop-livestock systems, would increase the adoption potential and realized benefits. A shift to the use of manure, nitrogen-fixing legumes and soil biological fertility in cropping systems requires greater knowledge of how to manage these systems effectively.

While some of these practices individually may make relatively small contributions to sustainability, profitability, and resilience, they remain useful during both the transition to and as components of fully redesigned systems.

This review demonstrates that agricultural systems designed according to ecological principles and local ecologies contribute to better outcomes for agricultural systems on the Canadian Prairies. We have argued that these systems require systemic change if profitability, sustainability, and resilience are to be optimized. Just as the key ecological pillars of diversity and integration lend stability and integrity to ecosystems, integrating diverse components in ecologically compatible complementary relationships within supportive economic and social structures promotes the overall health of the system, including environmental sustainability, long-term profitability, and resilience to shocks and stresses. Thus, system change is best done with purposeful and proactive redesign of agricultural systems at all levels, from individual farms to regional and even global scales, with particular attention to functional integration of diverse components.

The challenge to align Canadian Prairie agricultural systems with ecological principles is immense, especially in the current context of agricultural development where short-term productivity and economic efficiency are emphasized. However, the more holistic goals encompassed in ecologically based systems are fundamental to the long-term success of any sector or society and are worthy of serious pursuit.

Past government and university scientists in the Prairies have also called for system redesign with a shift to permanent agriculture based on diversified crop rotations and effective crop-livestock integration. Had our agricultural policy makers, educational institutions, and businesses embraced this advice, we would be much further ahead than we are today.

We believe that locally adapted ecological Prairie farming systems are still achievable but will require a major shift in research, education, and policy. A proactive move in this direction would provide a solid foundation for the development of environmentally sustainable, profitable, and resilient agricultural systems in Prairie Canada.

Joanne Thiessen Martens and Martin Entz are from the University of Manitoba’s department of plant science. Mark Wonneck is from the science and technology branch of Agriculture and Agri-Food Canada in Calgary. 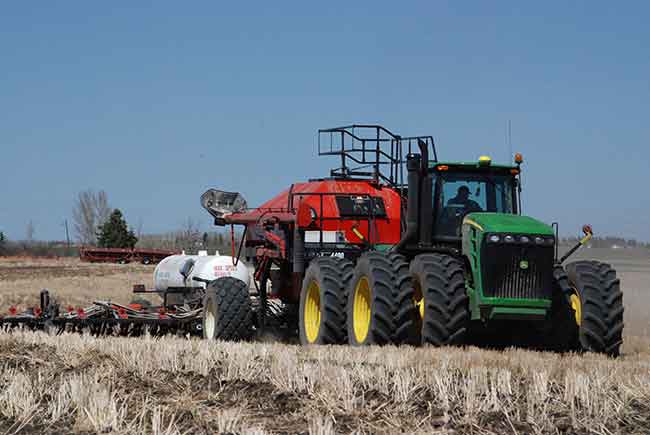 No-till seeding has contributed to the sustainability of agriculture.