Features Agronomy Soil
How to reclaim and manage eroded knolls

Much of our Prairie landscape has gently rolling to hummocky topography. The parent geological material on which these soils formed is often glacial till that remained after the glaciers retreated 10,000 to 12,000 years ago. 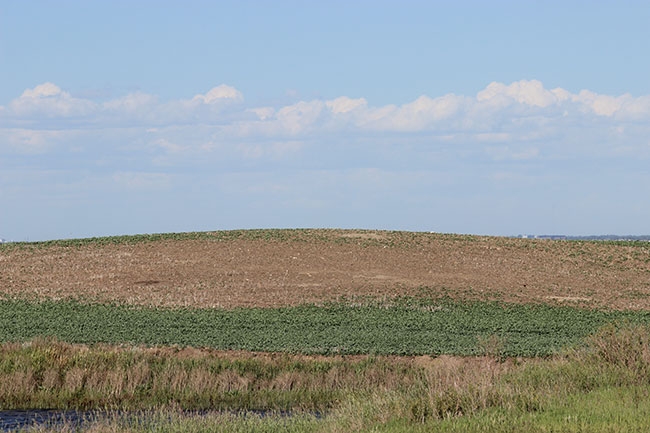 The variation in topsoil thickness is greatest where slopes sharply diverge from knolls to depressions. Much of our Prairie landscape has gently rolling to hummocky topography.

Thousands of years of soil formation and development on hill tops and upper slope areas resulted in thinner topsoil – primarily due to limited moisture for native vegetation growth. Thicker topsoil developed in mid-slope and lower-slope position areas and at the base of hill slopes.

As the Prairie landscape was converted from native grassland to cultivation, topsoil on knolls was gradually lost. In the early years of cultivation across the Prairies, wheat-fallow was a common cropping system. Summerfallow, coupled with frequent cultivation of unprotected soil, left topsoil vulnerable to erosion. Tillage and water erosion was a major factor in soil loss from knolls.

Tillage moved a tremendous amount of soil on cultivated landscapes and the effects were greatest in hilly landscapes, accentuating the erosion of knolls. The greatest amount of soil was usually moved when cultivating in the downslope direction versus in the upslope direction. The amount of soil moved by tillage is a function of slope gradient. Tillage erosion was often a major cause for severe soil loss on upper slope landscape positions and knolls. Many years of cultivation of knolls and leaving the soil bare has left them very susceptible to wind and water erosion.

Characteristics of eroded soil
Eroded soils lose clay- and silt-sized particles, as well as soil organic matter. The organic matter is mostly humus, made up of very stable carbon compounds. Organic matter takes hundreds to thousands of years to accumulate in the soil and is the glue that holds the soil mineral particles together to give surface soil a good granular or crumb-type structure. (Click here for more information.)

When erosion degrades the surface soil there are many physical, chemical and biological consequences.

Physical characteristics of eroded soil include:

Chemical and biological characteristics of eroded soil include:

Yield reduction on eroded knolls is often in the range of 40 per cent to complete loss in dry years. The reduction in farm income can be quite significant depending on the percentage of land that is made up of eroded knolls.

Practices to improve eroded knolls
The first thing to do is an assessment. Start by soil sampling and testing typical knolls to determine the soil nutrient deficiencies and other concerns, such as low organic matter or high soil pH. When taking the soil samples, carefully check to determine if there is a hard pan from tillage or if the subsoil is compacted. The subsoil of knolls is sometimes naturally compacted due to glacial deposition.

If the surface of the knolls is stony, removal of stones is often necessary. If the soil is compacted, consider using some form of vertical tillage or subsoiling to reduce the density of the soil. If this is necessary, it is best done in the fall when soils are dry to ensure good fracturing of the dense soil. Then, turn your attention to improving soil fertility. The best approach is to apply livestock manure or compost. For example, apply about 30 tonnes per acre of feedlot manure to improve soil fertility. This will also help to improve the organic matter and physical quality of the soil.

If manure or compost is not available, apply commercial fertilizer to aid in improving soil fertility. For example, most eroded knolls are very deficient in phosphorus. Producers should consider banding about 100 to 150 pounds per acre of P2O5 into the knolls. If other non-mobile soil nutrients are deficient, such as potassium, consider supplemental addition of these nutrients as well. Once phosphorus and other nutrients are brought up to adequate levels, watch the knolls for nitrogen (N) deficiency. Soil tests will often indicate N levels are lower on knolls than the rest of the field, so be sure to fertilize adequately. When spring soil moisture conditions are very good on eroded knolls, consider applying 25 per cent or more N fertilizer on knolls versus the rest of the field to make up for the very low soil N and organic matter levels. Increased crop productivity from manure addition, or adequate rates of nitrogen, phosphorus and other fertilizers, if needed, will encourage increased plant growth, which in turn will add increased root biomass below ground and produce more above ground stubble, preventing future erosion.

To further prevent erosion, knolls should be seeded back to grass to add the most organic matter to the soil and build soil quality. However, most farmers find this is not practical with knolls scattered across the landscape, so continuous cropping and direct seeding to annual crops is extremely important. Keep protective residue on the soil surface at all times. Tillage should also be eliminated and knolls should not be summerfallowed. Straw and chaff should be chopped and returned to the soil, not baled.

Reclaiming eroded knolls involves extra work. But, with additional inputs, including manure and fertilizer, coupled with careful management, these investments will increase crop production on the knolls. Increased crop production will add additional organic matter to the soil to slowly build soil quality. Spending time and money wisely to improve eroded knolls will increase production and farm income and will build soil quality over time.