In the past, canola growers have been advised to plant slowly to achieve precise seed placement. But now, the message is changing more than ever, as high-speed planters are garnering more interest. 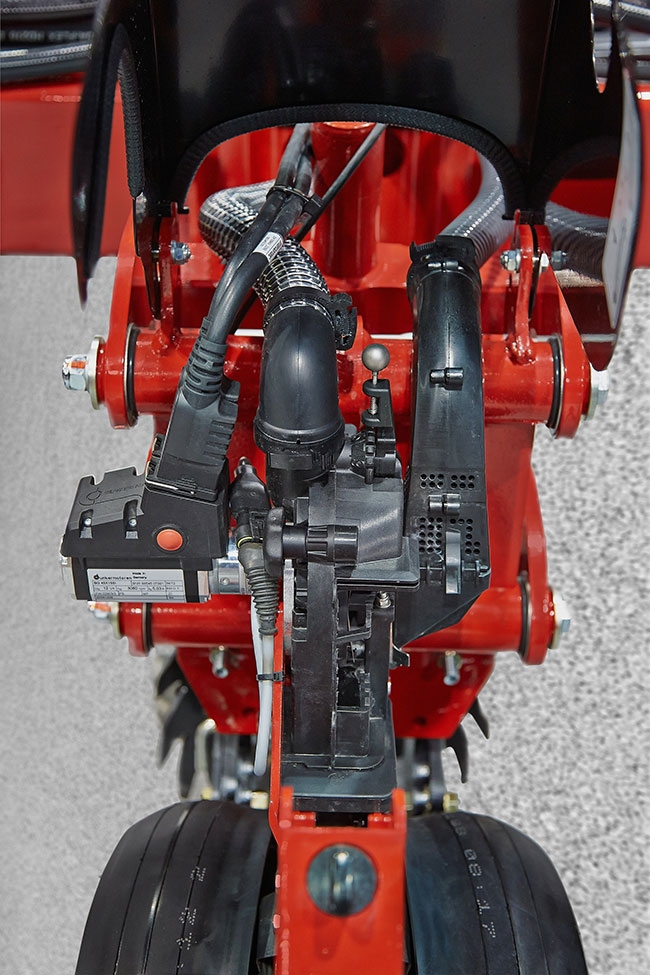 The Horsch Maestro metering system is driven by an electric motor on each individual opener. In the past

Moving to a planter system in a no-till or min-till system may be holding producers back, as it could mean having to set up different ways of managing fertilizer and trash. But for growers who are considering a high-speed planter for canola, there are a few key considerations.

For years, the message to growers was to slow down in order to precisely place canola seed at a uniform, shallow depth. While that message is still valid for air drills, it may not be valid for high speed, row crop planters.

“We are seeding canola at 7.5 to 8 [miles per hour] and getting good emergence and uniformity,” says Keith Nachtegaele in Battleford, Sask. “That’s about twice as fast as our air seeder.”

Nachtegaele purchased a Horsch Maestro 3115 row crop planter in 2017, and now has two years of experience with it. The planter is set up on 15-inch row spacing and is 40 feet wide. In 2017, he planted corn and canola with it and in 2018, he seeded canola, soybeans and black beans.

In addition to high-speed planting, a major motivating factor for the purchase was the vacuum planter technology that precisely meters out canola seed and spacing similar to traditional planters. The seed meters are driven by an electric motor, which allows faster planting speeds than ground-drive machines.  Nachtegaele has cut his canola seeding rate from around five pounds per acre to two pounds per acre.

“The seed savings help pay for the drill,” he says. “I’m also interested in seeing how soybeans perform here, and think a planter will be important with them.”

The planter uses a disc opener system with on-row packing and hydraulic down pressure to maintain accurate seed depth placement. Nachtegaele says trash management is key to ensure accurate seed placement. While residue managers in front of the disc opener are an option, Nachtegaele opts for pre-seed tillage with a Gates coulter harrow that helps manage straw and mixes up the topsoil slightly.

Shawn Senko, a Canola Council of Canada agronomist in Saskatoon, says that growers who are considering a high-speed planter for canola have a few key considerations. The first is how the fertility program will be handled. After years of one-pass seeding with side-band openers, the move to a planter will require a different approach. Nitrogen and sulfur fertilizer will need to be applied prior to seeding in some manner. While this means an additional trip over the field, it could potentially be done in the fall or early spring.

Nachtegaele applies nitrogen fertilizer as a top dress 28-0-0 application. In 2018, he is comparing anhydrous ammonia, 28-0-0 top dress, and 46-0-0 Super U N stabilizer, all fall applied. Bio-Sul sulfur fertilizer is broadcast applied. Phosphate liquid is applied in-furrow supplied from a 700-gallon liquid tank. The combination of faster speed and minimal stops to fill fertilizer means Nachtegaele is able to plant around 40 acres per hour.

Nachtegaele says the canola stems are generally larger in diameter due to the singulation and stand well. The crop is also very uniform in maturity, although slightly delayed compared to his air-seeded canola on narrower row spacing and five pound seeding rate. Overall, though, Nachtegaele is satisfied with the performance of his Maestro.

“Moving to a planter system in a no-till or min-till system takes setting up a new system for fertilizer and trash management, and I think that is holding back a move in that direction,” Senko says.

Horsch is not the only company moving into the high-speed planter segment. The Vaderstad Tempo L has a small seeds kit that allows planting of small seeded crops like canola and sugar beets. The Tempo also uses an electric drive for each seed meter, and a disc opener with hydraulic coulter pressure to maintain uniform seeding depth.

“I’m pretty happy with the stand establishment and crop yields. You have to manage the fields differently but I think it’s worthwhile,” Nachtegaele says.