Finding corn hybrids that are resistant to gibberella ear rot has proven to be an elusive goal for Ontario’s grain industry. Crosby Devitt, manager of market development and research for the Grain Farmers of Ontario, says funding research for disease resistance has been a key priority for the group, dating back to the inception of the former Ontario Corn Producers’ Association in the 1980s. 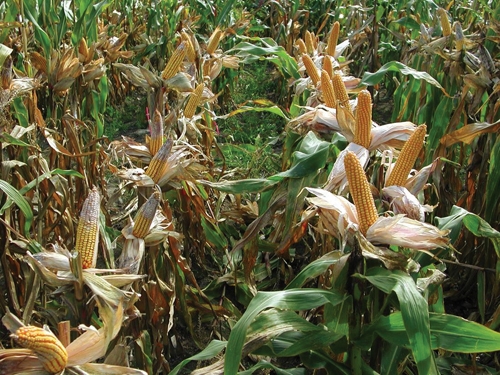 Finding corn hybrids that are resistant to gibberella ear rot has proven to be an elusive goal for Ontario’s grain industry.

He mentioned the challenge during a presentation of the GFO’s research priorities during a meeting of the Ontario Corn Committee in August 2012.

“You would probably think that within the 25-year horizon, we’ll have this problem solved and we’ll be on to something else,” says Devitt of his remarks. “As it has turned out, it continues to be an issue today, and there are a few reasons why that is.” Considered the most common and important ear mould in Ontario, Gibberella zeae is the sexual reproductive stage of Fusarium graminearum.

These mycotoxins are especially important to swine and other livestock producers because they have a detrimental effect on the animals.

For example, feed containing low levels of vomitoxin (1 ppm) can result in poor weight gain and feed refusal in swine.
While it may not be disastrous every growing season, Devitt says it shows up every year and has the potential to cause problems for farmers, especially for those who feed hogs or who sell into markets with low vomitoxin limits.
He says the industry is approaching the issue on several fronts including attempts to develop hybrids with genetic resistance.

“It’s not that we haven’t made research progress, I think what we’ve found is Fusarium is very complex, adaptable and genetically diverse itself. But corn genetics are complex too,” notes Devitt. Albert Tenuta, field crops pathologist with the Ontario Ministry of Agriculture, Food and Rural Affairs, agrees the industry is making progress but says the bar is moving up slowly. In addition to weather conditions, he says, there are some agricultural practices that can also create a greater potential for gibberella and Fusarium ear moulds. These include higher plant populations, increased frequency of corn in the rotation, and higher residue levels of 30 to 50 percent.

“The more factors that are more favourable towards ear moulds and gibberella development, the greater likelihood that you will see some degree of development,” adds Tenuta. As for hybrids, Tenuta says, the bar is also inching higher as companies are weeding out the more susceptible varieties and identifying more hybrids with better tolerance.

At Dupont Pioneer, Dave Harwood, technical services manager, says there has been a concerted effort to raise the level of tolerance to gibberella ear rot since 2006, widely considered as the worst year for mycotoxin development so far.
“There were materials in the market in 2006 that had a level of Gib ear rot resistance that was lower than the lowest materials that exist in the market today,” says Harwood.

In addition, he says, the company gives growers easy access to information related to its hybrids’ reaction to Gib ear rot.
“We issue scores in our catalogues, on a one-to-nine scale, and those scores are very carefully determined, based on as much field experience as we can assemble,” says Harwood.

Tim Welbanks, agronomy lead for Maizex Seeds, says the company looks for hybrids that can open their husks early and can dry-down quickly. These characteristics are aimed at reducing the spread of a potential disease.

“If you can get that grain dry, then that starts to slow the spread of the disease and you tend to get a little better grain quality,” says Welbanks.

Recalling the problems of 2006, Welbanks says there were some hybrids that had tight husk covers that encased the ears in a moist environment, producing ideal conditions for ear mould growth. As seed companies and farmers make adjustments in the wake of 2006, researchers continue to make progress on improving resistance for future varieties.

Dr. Lana Reid, corn breeder with Agriculture and Agri-Food Canada in Ottawa, says nine inbreds with improved resistance have been released from the program.

These ear rot inbreds have allowed AAFC researchers and others in many different countries to make scientific advances in studying ear rot in corn. The work also continues to develop resistant hybrids with high yields.

“Part of the problem has always been breaking that resistance/yield barrier, and the two latest (inbreds) have quite good yield in combination with another inbred to produce a decent hybrid,” says Reid. “Some of the inbreds we have released have become the resistance check inbreds around the world now. So we’ve got higher levels of resistance than what we’ve ever had before.”

Reid says it’s an extremely difficult process to develop resistance because the interaction between the pathogens and the host is complicated.

There are also many genes involved. What’s more, environmental conditions are adding further complications.
“With the changes we’re seeing in longer, hotter summers, we’re also seeing a change in the dynamics of what Fusarium species are out there,” says Reid. As a result, material that may have shown good resistance in recent years may not be suitable for future conditions. While a quick and easy fix for Gib ear rot is lacking, farmers do have some management strategies to help minimize the risk. Both Welbanks and Harwood recommend planting a mix of hybrids.

Welbanks says growing an earlier maturing hybrid or planting different maturities can help spread out the important flowering times of the crop. “If there are disease spores during a certain week in July, when pollination occurs, if you have an early hybrid you might miss it,” says Welbanks.

“If you have a 200- to 300-split in heat units in your maturities, then you know the germplasm is going to be a little bit different and your flowering dates are going to be different.”

In addition to a mix of hybrids, Harwood says insect protection is another consideration. Western bean cutworm, a relatively new pest to Ontario, has been observed in pockets where gibberella ear rots have occurred. “The insect damages the ear and forms an entry point, but as well those insects create a moist, microclimate where they’re feeding, and it just allows an environment for the pathogen to reproduce,” adds Harwood.

Depending on the end market or agronomic practices, he suggests choosing a hybrid with a high rating for Gib ear rot. “If you’re a livestock producer, a hog producer, somebody who is growing corn on corn, has higher residue levels or plants higher populations, narrower rows… all of those factors could increase your risk to ear moulds,” he says.

The use of fungicides is another area that is showing signs of progress.

Tenuta says research at the University of Guelph, Ridgetown Campus, is focused on applying fungicides on the ears during silking to reduce the development of gibberella and Fusarium ear moulds. “There has been promising research that shows that it is a potential tool that could be used,” says Tenuta.

As with other potential crop threats, identification is a key piece of the strategy to manage Gib ear rot.
Tenuta also says that Diplodia, which produces a white, mouldy growth on the ear – but does not produce a toxin – could potentially be confused for gibberella ear rot.

He says a hybrid with a high rating for gibberella may not protect the crop from some of these other diseases.